Preview: Opening 11th of July 'Made in space' @ Gavin Brown's Enterprise and Venus over Manhattan in New York - FAD Magazine
Skip to content 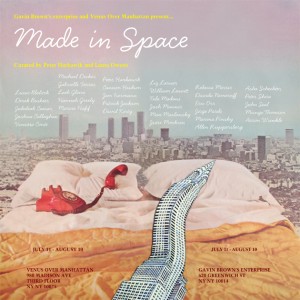 Opening reception: July 11, 2013 / 6-9 PM
Held in conjunction with Venus Over Manhattan
980 Madison Avenue
3rd Floor
New York, NY
10075
Previously shown at the Night Gallery in LA, ‘Made in Space’ offers an unconventional look at how LA artists from diverse backgrounds work in collaboration with one another. Now the show has made it’s way to the east coast of New York where ‘made is space’ will be on view from the 11th of July- 10th of August at both the Gavin Brown’s Enterprise and Venus Over Manhattan

Check out this cool video :Peter Harkawik and Laura Owens discussing the curation behind ‘Made in Space’

1. Someone drank tea. Someone else felt that a specific kind of taco eaten at a particular
geographic location was like a drug. The spices generated a certain kind of energy, or, perhaps, muscle memory. It was 2012.

2. In 2002, “thoughts mixed and burned with gasoline” turned to Orange County, a web without a spider, The Citadel, Eden-Olympia. The commingling of purposefulness and aimlessness was understood to be the effect of Junkspace.

3. In 1981, Peter Schjeldahl took a trip to Los Angeles and wrote a short essay damning our city to a future of cultural irrelevance, lest it somehow invert each and every one of its unique features. He wrote, “The wishfulness of LA’s citizens is simply explained as the effect of a life that enforces independence to the point of autism. Try to lean on anything or anyone and you’ll fall down[…] Los Angeles is a city without public spaces. There are only private spaces–fenced haciendas of self-maintenance and self-invention–surrounded with the soft, dreamy, zinging-withlight nowhere in particular.” Much as Michael Fried’s write-off of minimalism as theater, Schjeldahl missed the point.

4. Participants in the 2010 TV series “Wipe Out” drove to Magic Mountain for jouissance: that is, being battered around by brightly colored, slowly rotating foam shapes.

5. In 1986, a pedestrian observed a pair of giant steel springs rolling down the sidewalk near the corner of Wilshire and La Brea. Elsewhere, aphasiacs watched Ronald Reagan on television and were not fooled by his affect. Because they lacked the ability to understand the intended significance of various facial expressions and/or gestures, their experience of his speech was divorced from his image, rendering it as inert and senseless as the printed word.

7. The Mall of America is constructed in 1992. The FDA urges surgeons to abandon silicone in breast implants and the first McDonald’s franchise is opened in China. In the words of French anthropologist Marc Augé, “Place and non-place are rather like opposed polarities: the first is never completely erased, the second never totally completed; they are like palimpsests on which the scrambled game of identity and relations is ceaselessly rewritten.”

8. Food is a variety of colors. We all eat food. Certain foods appear one color or another on
account of food dye. Regardless of whether or not their color is a lie or we willingly suspend
disbelief (as in the instance of a Starburst — is it the flavor “Lemon” or the flavor “Yellow”?), we all eat, and we all shit. In painting, mixing color is a complicated process involving the opacity of various pigments and substrates. Mixing too many colors results in a sludge that is invariably described as “muddy.” This is much like our digestive system. Foods we eat are broken down by procedures which work in concert; the enzymes in our mouth, the acids of our stomach. The color in foods is combined slowly in our body, until we shit, and see the result of our gastric color mixing: brown. In 2009, The Wrigley Company discontinued their unpopular “Baja California” Starburst flavor.

9. A person discovered a pile of feces directly in the middle of a pair of women’s size 10 red pumps. The distance between the shoes and the feces, which looked very much like a chocolatedipped frozen yogurt dessert, or a dog chew, indicated that the person could have been squatting and defecating. This tableau vivant was found in a parking lot behind a chinese restaurant in Beverly Hills in 2008. Every transaction leaves a remainder.

10. In 2001, an auto dealership on the 134 Freeway decided to expand its advertising by taking over an adjacent parking garage. Mannequins, waving and smiling, some posed with balloons, were installed on its upper levels. This visuality of the frontal, of the fleeting glance, produced a sensation not unlike V-effekt in passing drivers. Like a Brechtian stage play, their collective event was stripped of its self-evident nature. That same year, Elizabeth Grosz wrote, “Space, […] outside the ruses of imagination, is not static, fixed, infinitely expandable, infinitely divisible, concrete, extended, continuous, and homogenous, though perhaps we must think in these terms to continue our everyday lives (and the architect is perhaps more invested in this understanding of space than anyone else). Space, like time, is emergence and eruption, oriented not to the ordered, the controlled, the static, but to the event, to movement or action.”

11. In 1993, someone sat in a recliner in Long Beach with a VHS deck balanced on each knee. One screen played Hitchcock’s “Rope” while the other played Altman’s “Short Cuts.” Nearby, under a bridge, someone was feeling like his only companion was the city he lived in, the City of Angels. Around the same time, a wallet was left in El Segundo.

12. Two friends, both architects, drove to Brentwood in 1994. They got out of their car and ran alongside OJ Simpson’s Bronco, hoping to catch a glimpse of reality in progress and joining thousands of people on the streets and overpasses in communal euphoria.

13. Two curators drove by a flip flop in the road. This was mutually lauded for its demonstrative effect. It was 2013.

To know more about the Venus over Manhattan Gallery:venusovermanhattan.com

For more info on the night gallery: nightgallery.ca

Check out this cool review of ‘made in space’ when it was on in LA: www.annenbergradio.org 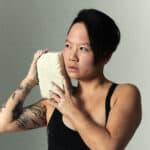 Taiwanese-American artist Stephane H. Shih uses foods and beverage staples from households in the East and West to explore the diasporic nostalgia and material lineages of migration and colonization. Her work creates a statement about consumerism and its culture of abundance as well as calling attention to the influence that cultures can have on each other. 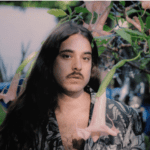 Night Gallery has announced the representation of the Los Angeles-based artist Marcel Alcalá. Alcalá has shown work with the gallery in two previous group shows, including MAJEUREFORCE (2020) and TRAINS (2014), and a recent solo exhibition with the gallery, Solita (2020). 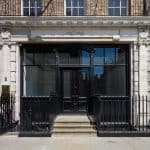 Pilar Corrias will open a second London gallery space at 2 Savile Row on 8th July 2021. Designed by London and Oslo-based Hesselbrand, the gallery will launch with an inaugural exhibition by Tala Madani