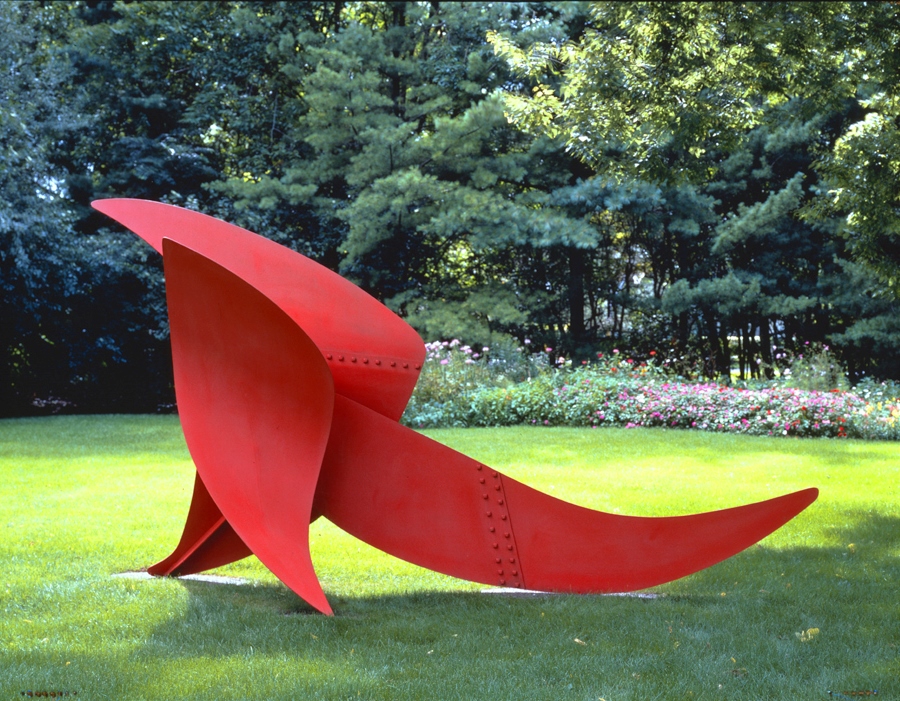 Following the success of Calder After the War, presented at 6 Burlington Gardens, Pace is to present Calder at the Castle, the first-ever outdoor exhibition of monumental works by the artist in the UK. Calder at the Castle will feature six monumental sculptures installed throughout the castle’s gardens, and is made possible with the collaboration of the Calder Foundation, New York.

From 1950 to 1970, Calder’s oeuvre took on a monumental dimension as his focus diverted to the creation of large-scale sculptures. Meanwhile, the post-war economic boom inspired corporations and government agencies around the world to commission large-scale works. Calder’s already established international success made him one of the most sought-after artists for such projects, presenting abstract yet modern site-specific works.

This exhibition, curated to interact with Sudeley Castle’s grounds, will include the elegant standing mobile 3 flèches blanches (1965), first presented to the public during Calder’s major retrospective at the Palazzo a Vela, Turin, in 1983. Featuring black and white elements, the work is a structure of delicacy, balance, and movement.

Trépied rouge et noir (1972) features a combination of lines and planes. Balance is obtained through sheets of metal that form a tripod and render the sculpture static, while the one-dimensional lines of the wire interact to produce movement. The stout base and the subtle movements of the floating coloured-shapes hanging from above demonstrate Calder’s imagination and sense of harmony.

Over nine feet tall and made of sheet metal, the red, blue, and black stabile Le Chien en trois couleurs (1973), which was most recently on display at the Peggy Guggenheim Collection in Venice, stands on three impressive legs. The sharp angles and planes of metal pronounce themselves fully in the air and conjure the abstract form of a proud little dog. Other highlights include 4 Planes in Space (c. 1955).

Brontosaurus (1970) is an example of an abstract form whose name lends a figurative interpretation, while Calder’s whimsical humour is evident in Untitled (Giant Critter) (1976) as the surrealistic figure painted in red holds out its arms and gives the impression of struggling to find its balance on two legs and what appears to be a large tail.

It is only in recent decades that outdoor exhibitions dedicated solely to Calder’s monumental works have been presented. A few of them include Alexander Calder in New York (Organised by Public Art Fund at City Hall Park, 2006–2007); Calders on the Parkway (Organised by the Philadelphia Museum of Art, 2004–2006); Grand Intuitions: Calder’s Monumental Sculpture (Storm King, Mountainville, NY, 2003); Alexander Calder: Five Grand Stabiles (Storm King, Mountainville, NY, 1988–1998); and, outside of the US, Les Monuments de Calder, 1992 at La Défense et Galerie Art 4, Paris, which then travelled to Kunst-und Ausstellungshalle, Bonn.

About The Artist
Alexander Calder (1898–1976) is one of the most acclaimed and influential sculptors of the twentieth
century. Renowned for his invention of the mobile, a kinetic construction of suspended abstract elements
that describe individual movements in changing harmony, Calder also devoted himself to making outdoor sculpture on a grand scale from bolted steel plate, many of which stand in public plazas in cities throughout the world. Calder’s wide body of work includes paintings, drawings, prints, book illustrations, jewellery, tapestries, and costumes and set designs for ballets and theatrical productions.

Born in Pennsylvania to a family of artists, Calder received an engineering degree from Stevens Institute of Technology in 1919 and moved to New York to enroll at the Art Students League in 1923. In 1926 he travelled to Paris, where he would periodically live and work until 1933, and where he created his fabled Cirque Calder (1926–31). After visiting Piet Mondrian’s studio in 1930, Calder began experimenting with abstract constructions, exhibiting his first non-objective works in 1931. The following year he showed hand- cranked and motorised mobiles, marking the beginning of his development as a leading exponent of kinetic art. Calder remained committed to abstraction during the 1930s and introduced biomorphic forms into his kinetic sculptures, synthesising Constructivist methods and materials with abstract forms that recall Surrealist imagery.

In subsequent years he refined his wind-driven mobiles, producing elegant, space- encompassing abstractions of gracefully bending wires. In the 1950s he began producing large numbers of stabiles—large-scale constructions made from cut and painted metal sheets—and simultaneously explored forms such as Towers (wall-based wire constructions with moving elements) and Gongs (sound- producing metal pieces). During the 1960s and 1970s, Calder created colossal stabiles for public sites around the world, installing works of 45 feet and higher in many American and European cities.

The exhibition is presented with the collaboration of the Calder Foundation, New York, a non-profit organisation founded in 1987 dedicated to collecting, exhibiting, preserving and interpreting the art and archives of Alexander Calder and charged with an unmatched collection of his works. The Foundation’s projects include collaborating on exhibitions and publications, organising and maintaining the Calder archives, examining works attributed to Calder, and cataloguing the artist’s works.