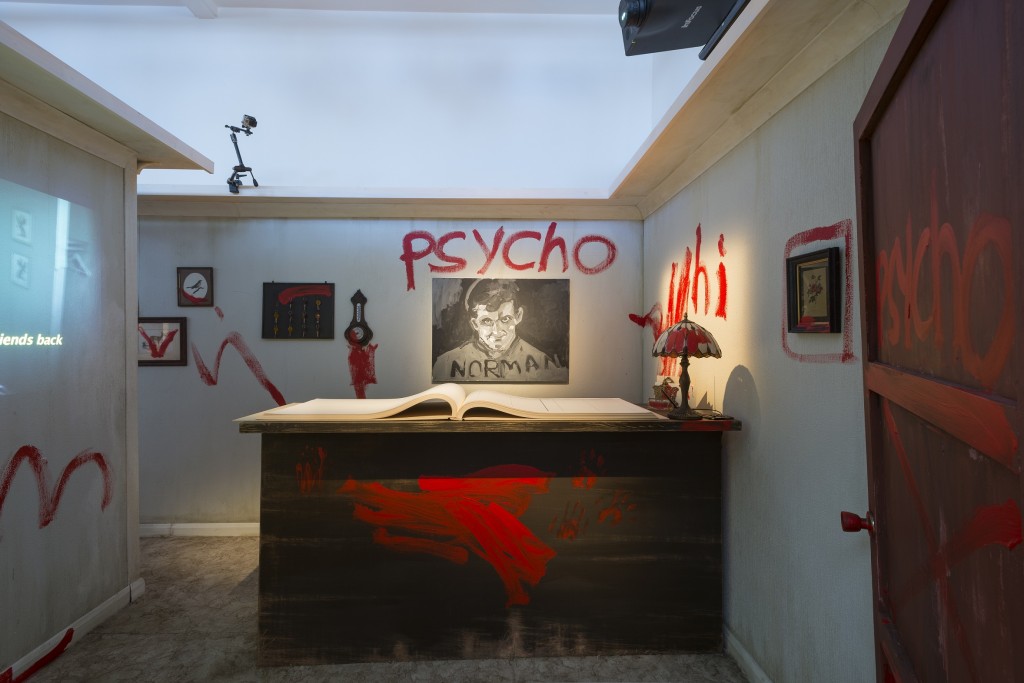 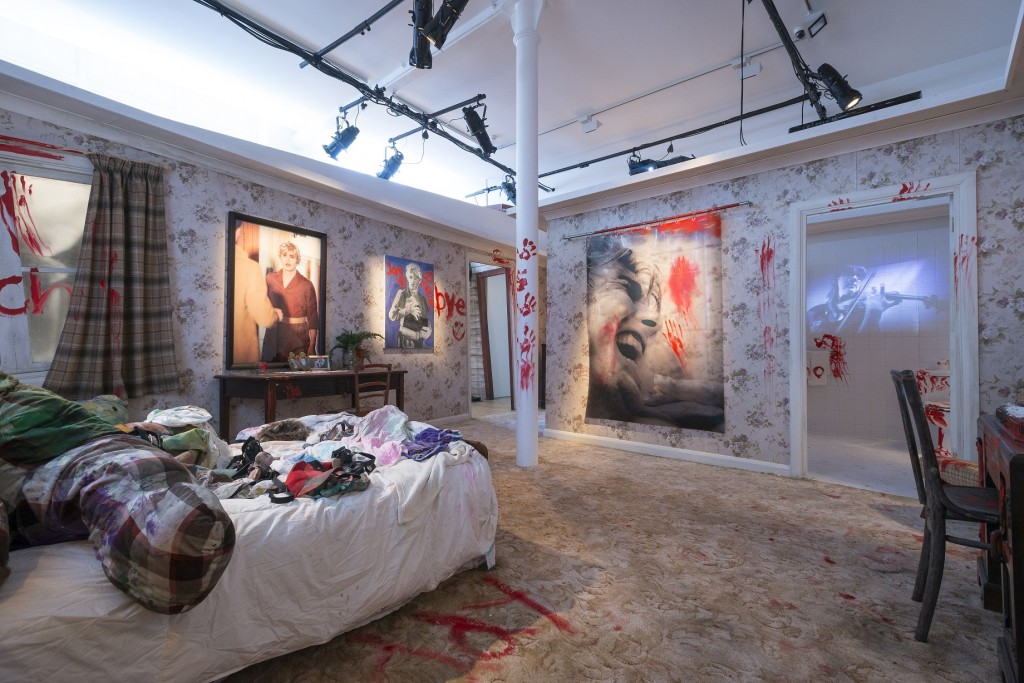 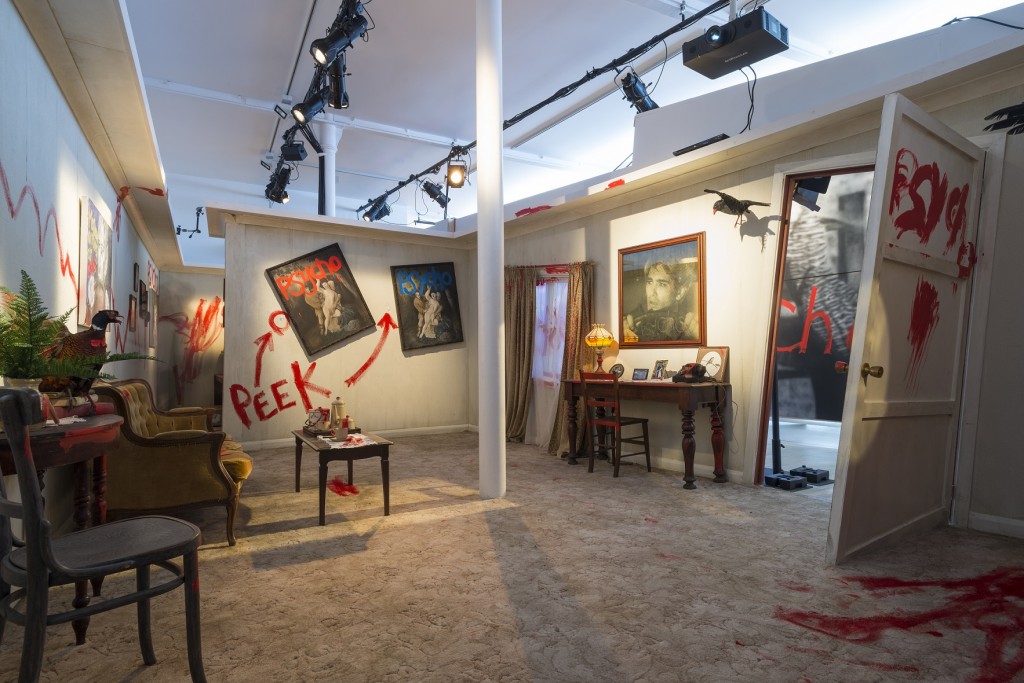 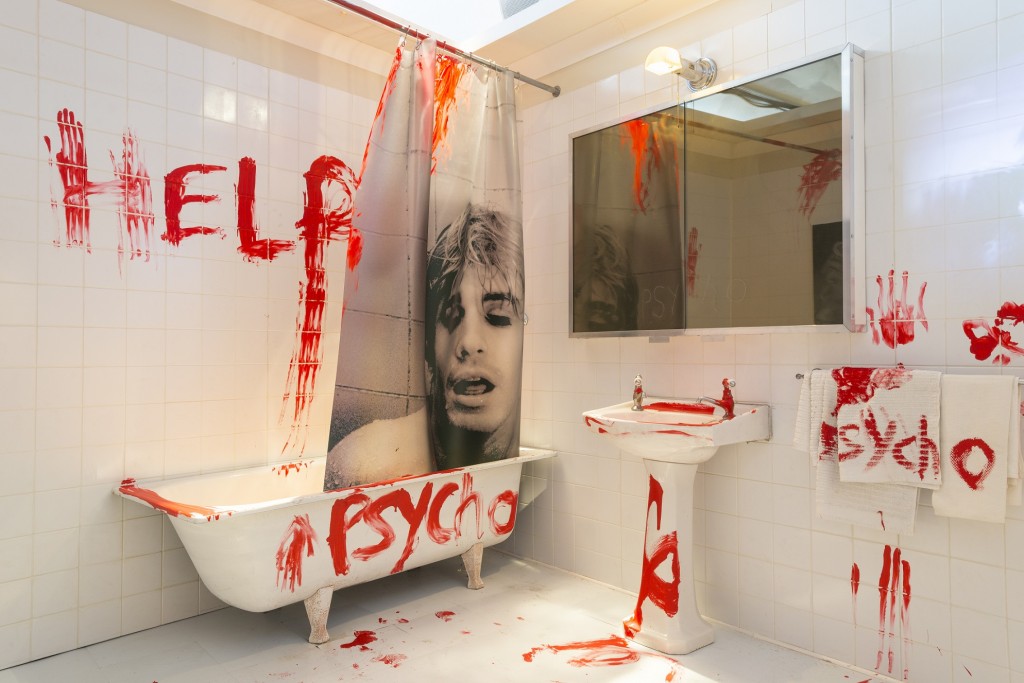 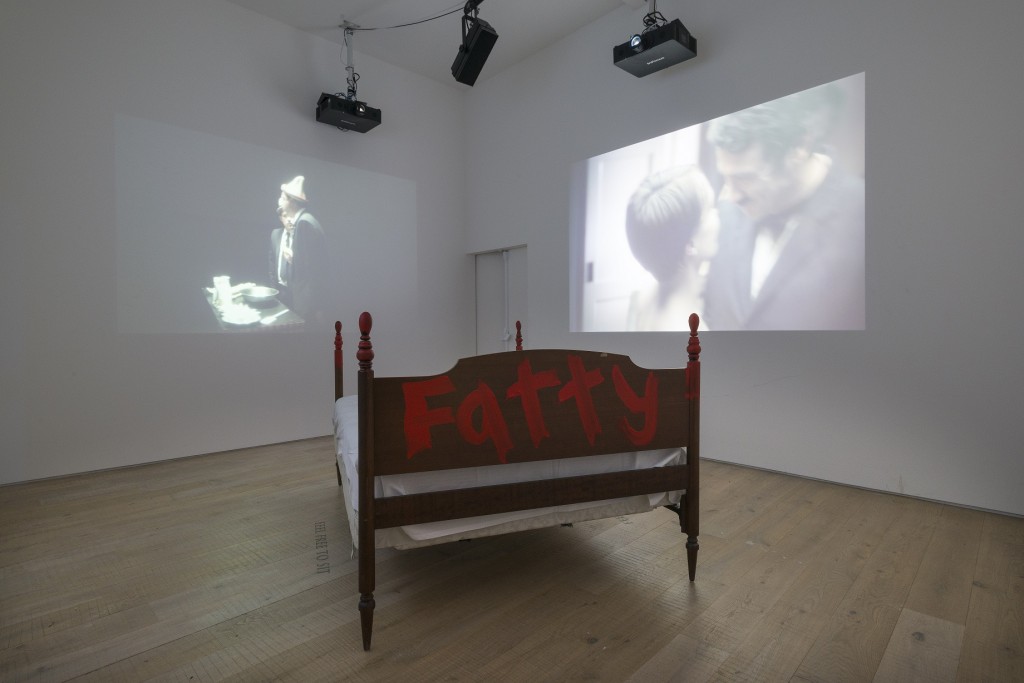 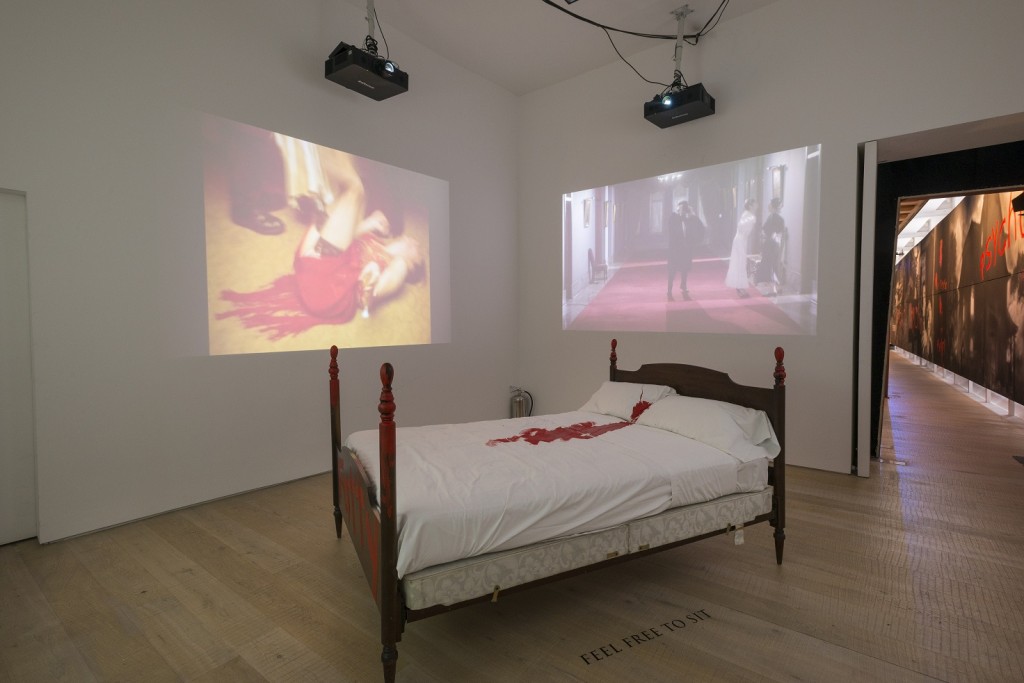 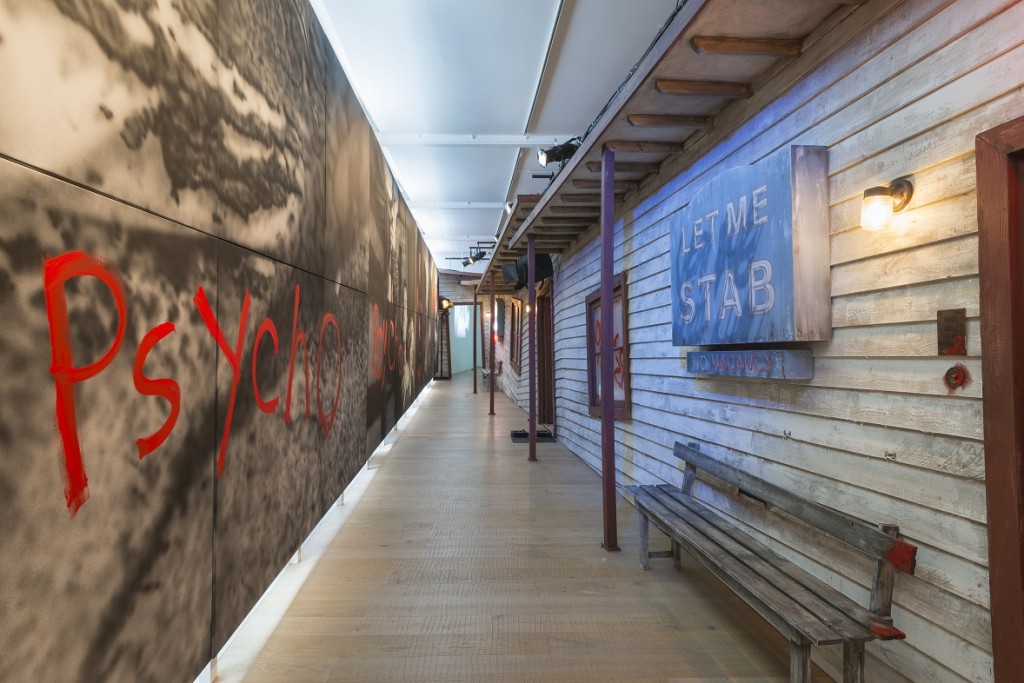 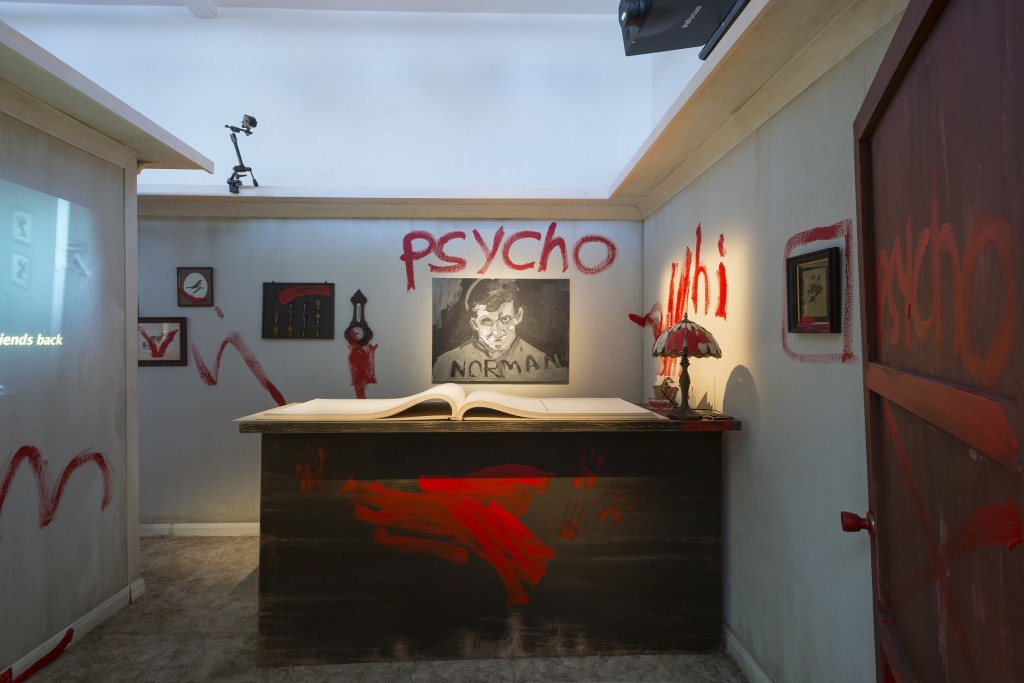 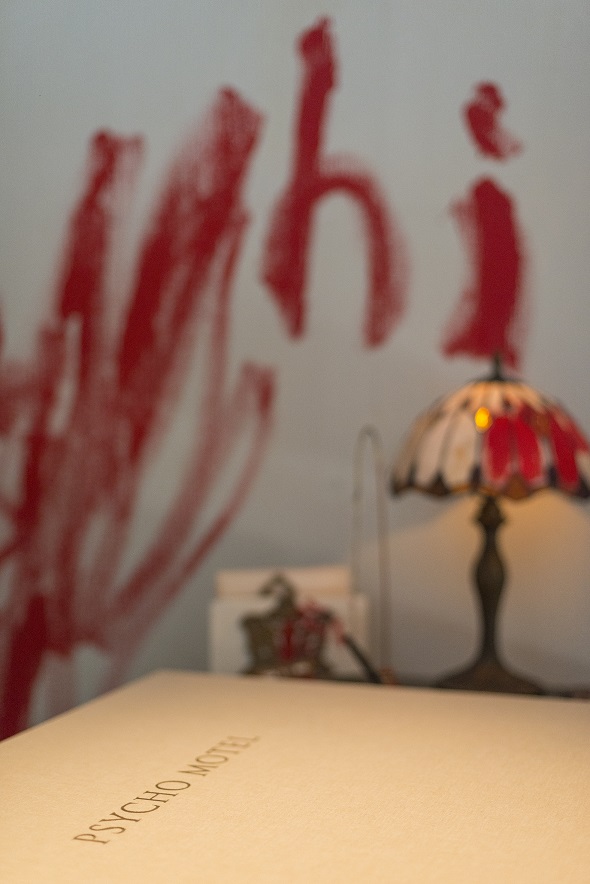 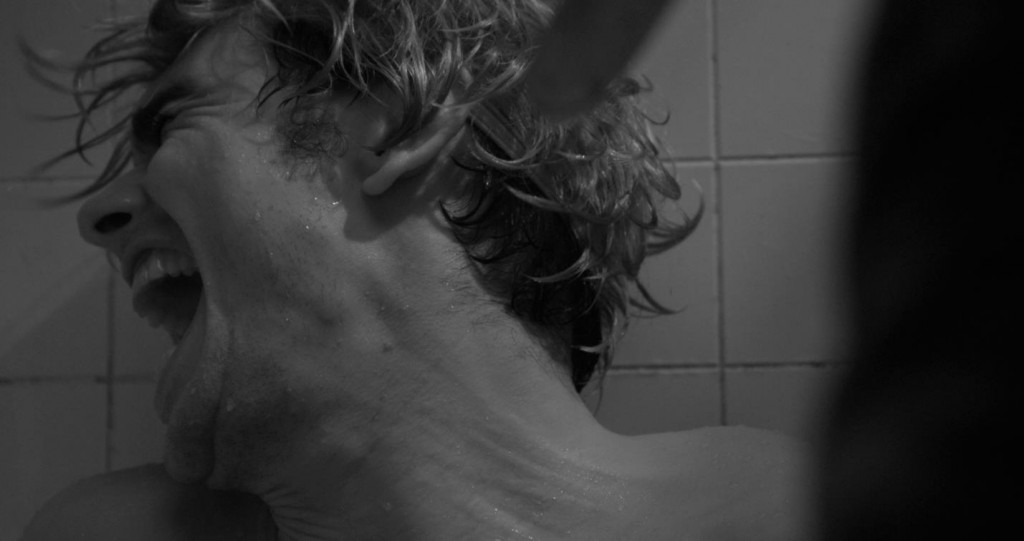 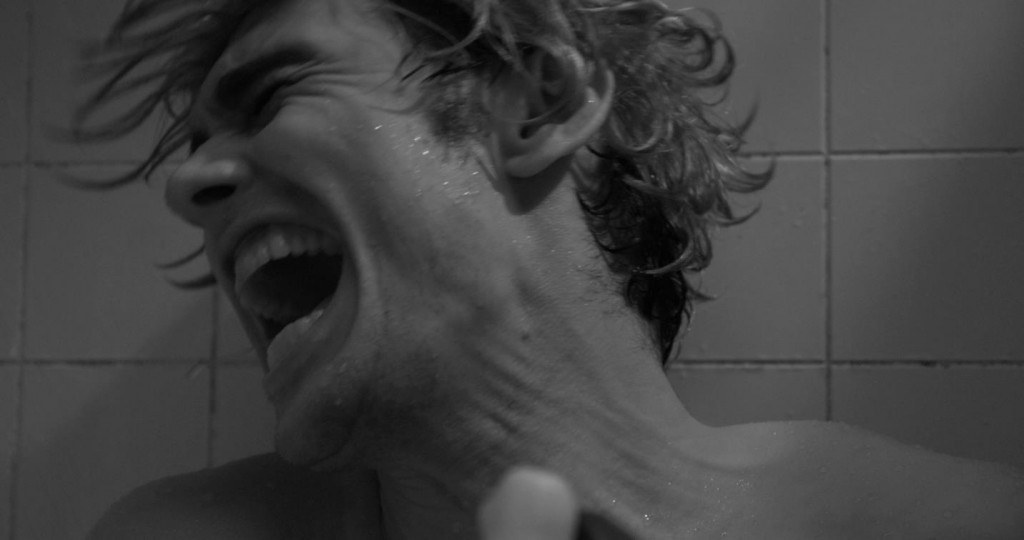 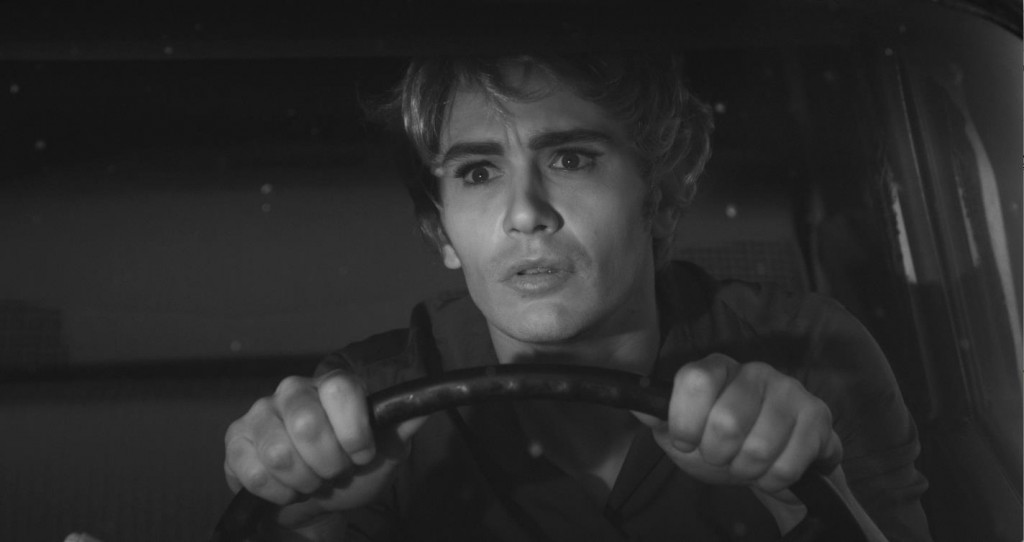 Psycho Nacirema is an exhibition featuring multi-media installations by the American artist and actor James Franco and presented by the Scottish artist Douglas Gordon. It is Franco’s first major exhibition in the UK.

The artists first collaborated on Rebel, an exhibition presented at the Museum of Contemporary Art, Los Angeles in 2012. In Rebel, Franco acted as a pro-ducer for Gordon, while in this exhibition Gordon has acted as a curator and teacher for Franco. In Psycho Nacirema, James Franco uses the motel structure as both a physical and literal frame- work, reinterpreting iconic scenes from the original film through evocative details such as the mo- tel neon signage or the infamous shower room where the film character Marion Crane, is murdered. One of Gordon’s most well-known works is 24 Hour Psycho (1993), a projection of Alfred Hitch- cock’s famous film slowed down to last an entire day which also sparked inspiration for the exhibition.

Franco’s installations heighten the psychological entrapment set out by Hitchcock, beckoning the audience to become a participating character within the plot. Split Marion, 2013 a diptych mirror in- stallation, prompts the viewer to join the artist to gaze and be gazed upon, projecting themselves as the characters of Marion Crane and Norman Bates. Compelled to identify with them, the audience is forced to recognise their own neurosis and psychological inadequacies generated by the silver-screen.

Psycho Nacirema makes numerous trans-historical juxtapositions. Principally using Hitchcock’s film as a starting reference, Franco twists it together with the real-life scandal of Fatty Arbuckle, the Hollywood star and first one-million-dollar paid actor charged with the death of the American model and silent film actress Virginia Rappe in September 1921. The Arbuckle case was filled with murky evidence and media speculations which shed a harsh light on the cinema industry.

Franco’s fascination with the subject leads to the final room of the exhibition. A four-way projected film which shows the re-enactment of the scenario that supposedly took place in Room 1219 where Arbuckle was found with Rappe who was mysteriously injured and distressed. Marrying the Psy-cho thriller with the Arbuckle scandal, the exhibition performs interplay of reality with fiction, com- pelling the viewers to address how cinema is entrenched in the modern collective consciousness.

“Film is the medium that employs all art forms, but it is contained within the screen. We take this multi-form idea and pull it through the screen, so that the different forms are once again ful- ly dimensional and a new nexus of interaction and significance is created. In this show, we go back to the original locations and images of Psycho and alter them so that once again the view- er’s relationship with the material changes. One becomes an actor when interacting with this work. Film becomes raw material and is sculpted into new work.”

About The Artist
James Franco, (b. 1978, Palo Alto, CA) is considered a leading actor of his generation as well as being a multitalented writer and visual artist. Drawing from his experience in film and television work, Franco has produced a body of video works, multimedia installations, and large-scale sculptures. His conceptual artworks range across media including painting, drawing, film, sculpture, installation and photography.
He’s been in group exhibitions at the Museum of Modern Art, New York and at the Museum of Contem- porary Art, Los Angeles. Franco holds an MFA in Fiction Writing from Brooklyn College and is currently a graduate film student at Tisch School for the Arts at New York University and a PhD candidate at Yale University. He also studies poetry at Warren Wilson College. He lives and works in New York & Los Angeles.

Douglas Gordon, (b. 1966, Glasgow, Scotland). Using films and complex large-scale video installa- tions, photographs, texts and objects for his work, Douglas Gordon (b. 1966, Glasgow) questions the viewer’s subjectivity and the prescription of meaning to experiences. He frequently uses cinema and video as a medium, often installing it with a sculptural outlook. Gordon was educated at the Glasgow School of Art and the Slade School of Fine Art. He was the recipient of the Turner Prize in 1996 and represented the Britain at the Venice Biennal in 1997. He lives and works in Berlin.

In 2008 Gordon was Juror at the 65th International Venice Film Festival, La Biennale di Venezia, Venice and in 2012 he was the Jury president of Cinema XXI at the 07th Rome Film Festival, Festival Internazio- nale del Film di Roma, Rome. 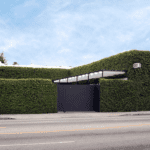