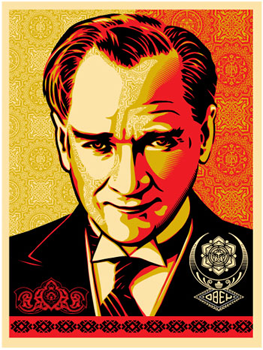 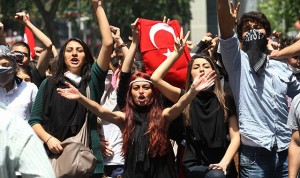 With a well known reputation known to take a political stance in his works, Los Angeles based graphic designer, Shepard Fairey recently released a portrait of the former Turkish leader, Mustafa Kemal Ataturk, on his OBEY Giant website this week. The image was crafted several years ago per request of a turkish friend and was intially unavailable to the public, but due to the revolts and protests occuring in Turkey at the moment,he felt the need to release the image for online users to download and manipulate as they please.

Fairey commented on his OBEY blog, “The overall issue is that the current Prime Minister Recep Tayyip Erdogan and his government have come too far towards authoritarianism, dictatorship and fascism, and farther away from Ataturk’s founding and modern society’s democratic and secular principles, including plans to demolish Ataturk Cultural Centre. It is not a political or religious movement, it is a human rights movement representing all corners of their society.”