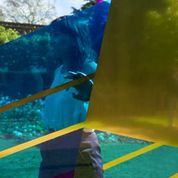 Sinta Tantra with her work: ‘The Eccentricity of Zero’, 2013. Glass and vinyl, 175 cm in diameter. Picture credits:Rick Roxburgh

Yvette Greslé chats to Sinta Tantra before the launch of her public sculpture ‘The Eccentricity of Zero’ at Napoleon Garden, Holland Park, London W8 6LU. The work is presented by The Royal Borough of Kensington and Chelsea, and the Royal British society of Sculptors (www.rbs.org.uk) who, since 2012, have collaborated on an initiative to celebrate and support the work of women in sculpture.

‘The Eccentricity of Zero’ is unveiled today (22 May) and is on view until 4 November 2013 from 7.30 until 30 minutes before dusk. www.sintatantra.com

Tantra (born in New York in 1979) is a British artist of Balinese descent. A graduate of the Slade School of Fine Art (University College London), and the Royal Academy of Schools, her work explores space, architecture and the public realm. Recent public commissions include ‘Greater Reality of Elsewhere’ (Locwus International, Swansea, Wales); ‘Together Yet Forever Apart’ (Open Eye Gallery for the Liverpool Biennial) and ‘A Beautiful Sunset Mistaken For a Dawn’ (Canary Wharf Group, London). 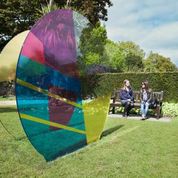 Historically, sculpture has been shown in the Napoleon Gardens but the emphasis has been on male artists. The collaboration between the Royal British Society of Sculptors and Kensington and Chelsea is about getting female sculptors to show their work here.  Women are under-represented in large-scale public art projects.

Seeing my work as sculpture is a new experience. I still feel very much rooted as a painter but I think that’s where the excitement happens: working in a relationship to architecture, and thinking about three-dimensional space.

When I exhibit in a public space I always spend quite a lot of time figuring out how it feels. I think about how a body might feel in a space. The difference between Holland Park and many other parks is that it’s very formal (in its layout and its setting). It reminds me of eighteenth century garden landscaping with its hedges, and winding paths. There’s something very Romantic about it. There is also a sense of nostalgia about Orientalism. Leighton house is nearby. There’s the Japanese Garden, and there are all these peacocks running around. You can’t get more exotic then peacocks! The idea of Orientalism has to do with British colonial identity; and it still seems to exist here in this part of London. 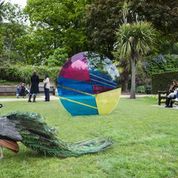 In what form do you think colonialism (its traces) exists today?

I think it exists in different forms and in different political situations. I think you can’t help associate the British eighteenth and nineteenth century with colonialism (the sense of exotica). Today our access to visual culture and popular culture is so immediate, fewer things become exotic. But here in Holland Park you get that sense of the exotic in the past. The peacocks are incredibly exotic in this setting, and we’re all enthralled by them. I’m not sure how colonialism exists in architecture and visual culture anymore but it definitely feels part of the past of this park. That’s what I wanted to picture in terms of colours and the way I used my materials. 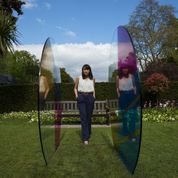 I’m interested in how you enter history and politics as an artist. How does art muddle things up? Make us look at things differently? Or shift our perspectives about things?

My work layers an identity over a pre-existing context, and I am interested in playing up and contrasting these. When one looks at my work one might think: ‘pretty colours’ or ‘visually pleasing’. But I also like the way that colours (and also geometry and space) can bring about a sensorial, bodily experience. The way that we walk around space, and the way we interact with it, says a lot politically.

In Holland Park there are a lot of artworks to view and things to take in at leisure, and I quite like the idea of thinking about the body at leisure and at work. I’m interested in all these different situations where the body is doing different things, and ought to be behaving in a certain way. 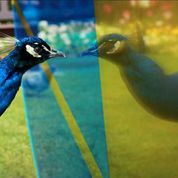 I enjoy the way the work plays with mirroring, asymmetry, and disjuncture. The way you work with geometry is very interesting.

I play with architectural space. There are two glass panels which are offset, and there’s a 1 meter gap for people to walk through. I was thinking about eighteenth century landscape gardening, about Versailles and hedges and mazes. There are a lot of playful aspects to the gardens in Holland Park. Hedges provide screens where you can hide or be hidden. But there are also areas of the garden that are ideal for promenading.  I like thinking about these elements as props: it’s very theatrical here. You can play out a lover’s scene amongst all the little props (hedges, screens, winding paths).

The work is about seeing and not seeing, revealing and hiding, translucency and opacity.

It’s the first time I’m using glass, and I play with the idea of looking through the work. I’m working quite a lot with light, vinyl and glass at the moment. What I’ve done here is combine the translucency of the see-through colours (the pinks and blues) with the opacity of gold. The gold casts shadows onto the grass and I quite like that idea of the tension between see-through and opaque colour. I think opacity is about hiding and unveiling. As a painter I’m interested not only in colour, depth or hue but also in the materiality of paint itself. I feel as though I’m using paint in quite a sculptural way. I’m literally cutting into it like a collage rather than brushing it on. 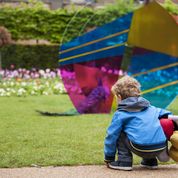 Looking at the work, it frames, reflects and mirrors.

Graphically you can see pictorial play in colours and surfaces. I also play with the idea of three dimensional and architectural spaces. There’s a play on different kinds of spaces. You can see a clear square in the middle of the work, and when you walk around it the square gets bigger and wider.  The square is a framing device. You can also see through the work to what’s around it: the flowers. I’m interested in this idea of looking through a frame that is different to a canvas frame because it’s bringing nature in. Whenever I create a work outdoors I try to somehow incorporate elements of nature within it. When the sun rises and sets it creates a kaleidoscopic pattern. You can see patterns and shadows on the floor.

Is disjuncture and dislocation something that you play with, in your work as a whole?

Yes. I try to offset things. I’m a painter working with architecture, space and now three-dimensional form. I get most excited about creating works which are on the edge. Work that isn’t really this or that: it’s in-between things or two worlds. I do have to talk to engineers and architects, and people of other disciplines. That’s what I love the most: having conversations about the same thing from completely different angles.

Are you interested in the boundaries between mediums, and how one crosses them?

I’ve never been the kind of artist that jumps from performance to sculpture and so on. I feel like I just want to stay right on the edge rather than jumping in. Having said that I think there are lots of possibilities for the work to move forward. 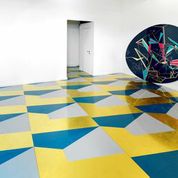 How do you think your background as a painter shapes the work you make?

I was very inspired by Sol Lewitt when I was younger. I like the idea that you can create a blueprint for a piece of work, and that it can then be made by someone else. I like the idea of edges and definitions, and being incredibly exact. I’m not interested in being in the studio and having a relationship with a canvas. I don’t like the messiness of paint but I like the language of pictorialism. It’s important for me to think about how and why things work formally (and in terms of composition). I begin with an architectural framework and then I apply my colours, my graphics, and my identity. I am a painter but I have to select the edges of the canvas and then I can paint.

I’m interested in how you think about place, and geography.

There’s a formal element of place in my work. But there’s also a sense of place in relation to culture and identity. When I do overlay my work onto something pre-existing it’s not only saying something about colours and geometry. What does it mean politically for a ‘young Asian woman’ to assert or place her identity in these contexts?  What does that say? What does that say about the world?  Fifty years ago I couldn’t imagine a young Indonesian woman living in London making public art works in the UK. It’s pretty incredible to think about the journey of politics and women. 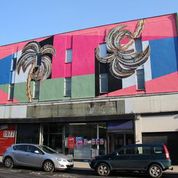 Sinta Tantra. ‘A Greater Reality of Elsewhere’, 2013. Paint and printed dibond on building. 230 High Street, Swansea, Wales. Commissioned by Locws International of Art Across the City.

When I look at your work I see the formal registering of displacement. I also see humour. I read these kinds of things as critical and strategic. Not as something that needs to be over-explained but it seems to me you’re trying to reach for something quite critical.

I am interested in playing with boxes and jumbling them up for people. Art is a way for me to express something that is beyond language.

I love the boldness of many of your public commissions. In conventional terms public art and architecture is male-dominated but you take on these spaces. You just go in there and claim these difficult spaces, and the work you make is bold and funny and irreverent.

When I was younger I took refuge in films and musicals. I love the idea of people just bursting out into song. I enjoy the elements of musicals that are camp, and over-the-top. I’m also interested in femininity and masculinity and there is that in the work. I think if my work were reduced to a smaller scale it could look rather decorative. Blowing it up and using bigger materials, bigger scale, making it public art, and having that feeling of permanence changes the idea of what decoration or surface is. In the past I’ve talked about the concept of Dandyism, and masculinity.  There’s an outer identity we all have (and no one knows if there is an essentialism at all) but I like the idea of performance, and perhaps this relates to the boldness of the work and the colours I use. 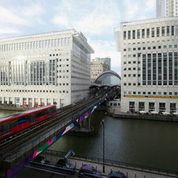 Is there anything unexpected that came about in the process of making and installing the work at Holland Park?

The peacock! I’ve made work in public spaces before but it’s so unusual in London to have something like this (or anywhere in the world). The peacock’s territory is Napoleon garden, and he likes and interacts with a lot of the artworks here. I never knew he would be so fascinated with his reflection and go round in a circle so repeatedly. I think my work snaps when real life or real things interact with it (like the peacock, or the children playing in-between the work). Going to a gallery we inhabit an individual space where we reflect and critique. Here it’s slightly more interactive. There’s a wonderful sense of scale when the peacock gets his feathers out.

(all images courtesy of Sinta Tantra) 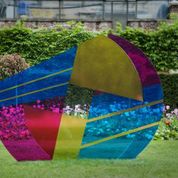 ‘The Eccentricity of Zero’ is on view at Holland Park until 4 November 2013.