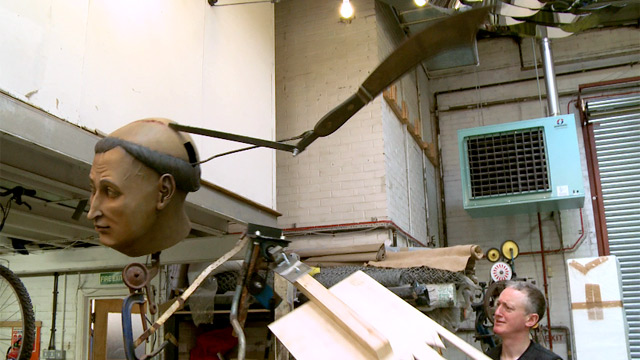 Saints are more often associated with traditional sacred art than with contemporary work, but Michael Landy, current Rootstein Hopkins Associate Artist in residence at the National Gallery, has been inspired to revisit the subject for this exhibition.

Landy’s large-scale sculptures consist of fragments of National Gallery paintings cast in three dimensions and assembled with one of his artistic hallmarks – refuse. He has scoured car boot sales and flea markets accumulating old machinery, cogs and wheels to construct the works. Visitors can crank the works into life with a foot pedal mechanism.

Towering over you, the seven sculptures swivel and turn, in movements that evoke the drama of each saint’s life. Saints Apollonia, Catherine, Francis, Jerome, Thomas – and an additional sculpture that takes a number of saints as its inspiration – fill the Sunley Room alongside paper collages.

The works by artists of the early Renaissance were particularly inspiring to Landy and you can see them, including Carlo Crivelli’s Saint Jerome (about 1476), Lucas Cranach the Elder’s Saints Genevieve and Apollonia (1506), Sassetta’s The Stigmatisation of Saint Francis (1437–44 and Cosimo Tura’s Saint Jerome (probably about 1470), displayed in the Gallery’s Sainsbury Wing.

About the artist
Born in London in 1963, Landy attended Goldsmiths College and is part of the generation of artists who became known as the YBAs (Young British Artists). He is best known for his 2001 installation, ‘Break Down’, where he catalogued and then destroyed all of his possessions in a former department store in London. 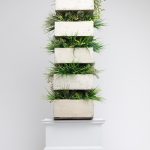