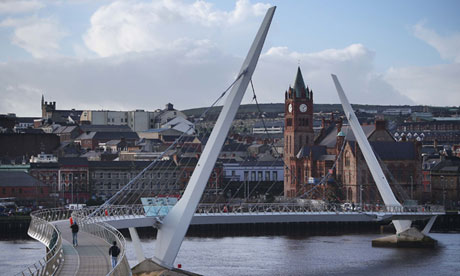 This article titled “Derry gets its cultural kicks and a new start from local heroes” was written by Henry McDonald in Derry, for The Observer on Saturday 18th May 2013 12.59 UTC

At the porch of St Augustine’s Anglican church, wedged on Derry’s walls between the loyalist Fountain estate and the republican Bogside below, volunteers Elma and Ivan Taylor were delightedly greeting their latest stream of foreign visitors.

As Derry’s year as Britain’s city of culture reaches its mid-point, the Italians, Germans, French, as well as the English, have all been beating a path to this compact, quaint, 18th-century church, where Derry’s founding saint, Colmcille, created the first Christian place of worship in 543.

In a city shattered by Bloody Sunday, relentless bombing and sectarian strife in the past, there are signs everywhere of a feelgood factor. The Taylors – who hail from the unionist Drumahoe area on the mainly Protestant eastern bank of Derry’s river Foyle – said all communities had taken ownership of the city of culture.

Derry certainly has its fair share of cultural capital, boasting homegrown stars such as Seamus Heaney, the playwright Brian Friel, and one of the best-loved bands of the 70s and early 80s, the Undertones. But there is a new wave. Religious venues such as St Augustine’s have opened their doors to the secular choirs formed by the city’s new generation of young musicians. Back in March, as part of city of culture celebrations, the church was transformed into a concert hall with a live music gig that included Derry’s latest band about to hit the big time – Little Bear. “Staging the concert was to show that we have taken a place of worship from the 6th century into the 21st century,” said Ivan Taylor.

Little Bear’s music opened up city of culture 2013, accompanying the New Year fireworks celebrations. The group are now on the cusp of signing a deal with an international record label.

Then there is the local 16-year-old singer-songwriter Bridie Monds-Watson, who starred in the Other Voices Derry spinoff event back in February.

At a time when Northern Ireland is deep in economic gloom, and there are fears that extreme republicanism may be making a comeback, particularly in Derry, that feelgood factor – and the sense of a promising future – has rarely been more welcome. Derry is one of the UK’s most impoverished (and youngest) cities. Nearly 10% of its working population are on the dole and, apart from west Belfast, the city has the highest numbers on welfare benefits in Northern Ireland. Derry is also a stronghold of the New IRA, the republican terror group opposed to peace and the political settlement at Stormont.

But the artistic renaissance, confirmed and showcased by a year in the cultural limelight, has even prompted some of its most famous sons to consider a long-awaited return to the recording studio. The band that recorded Teenage Kicks — DJ John Peel’s favourite record – have written the soundtrack to a new play about an Ulster punk band, which premiered last week and, as a result, have enough material for an album.

The eight songs to accompany Gary Mitchell’s drama are the work of brothers John and Damien O’Neill, who wrote most of the Undertones’ hits in the 1970s and 80s. Members of the cast play the songs on stage and even use one of John O’Neill’s original guitars, a black Fender Telecaster, that he played on The Old Grey Whistle Test and Top of the Pops during the Undertones’ halcyon days.

“We are talking about [a new album],” said Damien O’Neill, “although it’s early days. We have the basis for an album from the new songs we wrote for it. The play is all about a former punk group who were formed when they were 16 and 17 and who come together to reform in 2013. I think we can get that kind of thing, given our own history. It is also about people getting a second chance, just like what is happening to Derry in 2013.”

O’Neill said he was proud that the city of culture had “really put Derry on the map after years of it being ignored”. Kieran Griffiths, the play’s producer, said the choice of Mitchell’s Re-Energize was deliberate. The drama is set on the Rathcoole estate, a loyalist working-class area on the northern edge of Belfast. “The first play we put on for the city of culture year was Over The Wire, which was written by Seamas Keenan about Irish republican prisoners in the Long Kesh when it was burned down in the early 1970s. We decided our next one had to reflect loyalist working-class experiences, so Gary’s play was perfect. It was part of our plan in 2013 to convey stories from every side of the community,” Griffiths said on Friday, as the sunlight outside bounced off the ancient stonemasonry, creating shafts of light across the wall’s ramparts as tourists filed past.

Tourist numbers are up, as are the numbers of theatregoers in The Playhouse. The theatre’s Aine McCarron said that in January alone 99% of seats were filled. This week Derry is preparing for the influx of 50,000 music fans as BBC Radio 1’s Big Weekend comes to the city. A current of excitement is coursing through the artistic community.

Not everyone is entirely on board. Emmet Doyle, 26, who described himself as a “moderate nationalist opposed to violence”, sounded a sceptical note. “If you go to areas like the Bogside, the Creggan or Brandywell, the vast majority of people in those places will tell you there is no city of culture effect. The people in those districts still don’t have the money to spend going to events like the Royal Ballet. In terms of tangible effects on people’s lives the opening of the Peace Bridge across the river Foyle in Derry has had far more impact than the city of culture, in terms of bringing people from both sides together.”

But in Bogside itself, Frankie McMenamin, 48, recalled life in what he referred to as “wartime Derry”, when his home was being constantly raided by the police and soldiers and there was violence every day.

Resting on a bench in Guildhall Square, he was positive about the city of culture. “Life is far, far better now than back in the nightmare days, and if the city of culture creates a feelgood factor, then that has to be great for everybody.” 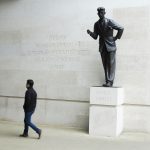 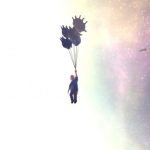 Videogames are a remarkable artform that can help save UK culture

Videogames speak culture with ever increasing fluency, but cultural policy doesn’t speak much videogame (yet)