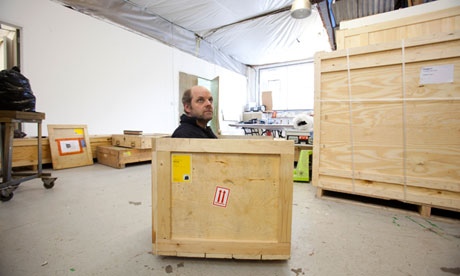 ‘Make your own laws’ … Gavin Turk in his Hackney studio. Photograph: Graham Turner for the Guardian

This article titled “Gavin Turk, visual artist – portrait of the artist” was written by Interview by Laura Barnett, for The Guardian on Tuesday 7th May 2013 17.30 UTC

What got you started?

Not quite getting the hang of anything else. There was no blinding moment when I realised that what I wanted to do with my life was to be an artist. I just enjoyed making art as a kid, went through art education, came out the other side, and suddenly, I had a gallery.

What was your big breakthrough?

Failing my MA [Turk’s degree show was an empty room with a blue plaque reading “Gavin Turk Sculptor worked here 1989-1991“]. It was bad news, of course, but oddly, it soon became good news – I found that a lot of people were on my side. With art, it’s difficult to establish what is good and bad, what’s provocative and what isn’t. These ideas have been motivators for me ever since.

Much of your work questions the idea of the artist as the sole originator of an artwork. Do you see yourself as an iconoclast?

I’d like to think I was. I try to interrogate ideas of value with my work: to stop the blindness that appears when certain artworks become iconic, and then unquestionable. It’s always been important for me to keep on questioning.

Who or what have you sacrificed for your art?

A white Transit van. I crushed it into a cube, and turned it into an art object.

Why do some people have such trouble with conceptual art?

I think they don’t like the word “conceptual”; they say, “Oh, it’s not just about looking and loving, it’s about thinking.” People often don’t want to do any work with art – they just want to see something and enjoy it. I can’t see art in those terms. To me, art is always about ideas. Really, it’s all conceptual.

Which artists do you most admire?

Leigh Bowery, for being a wild character who made art I could never make myself. And the gallerist Joshua Compston, who ran a space called Factual Nonsense and unfortunately died aged 25. He was a great inspiration to me.

What advice would you give a young artist?

Make your own laws, then take your work out there.

If you could send a message back to your critics, what would it be?

Career: Failed his MA at the Royal College of Art in London, but went on to become part of the loose group of Young British Artists in the 1990s, and to show in major galleries around the world. The first monograph of his work is out now; and the exhibition Gavin Turk: The Years is at Ben Brown Fine Arts, London W1 until 14 June.

High point: “I feel good at the moment – I’ve just done this book of my work, and I feel there’s lots more art to make.”

Low point: “About 16 years ago, we had very little money and two young children; I felt I was both a bad father and a not very interesting artist.”