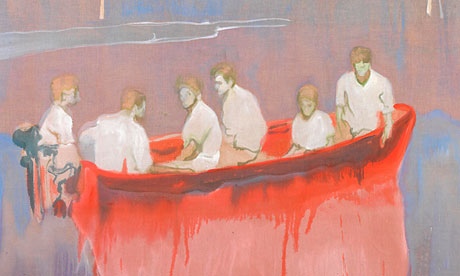 A lone figure walking beside an indigo swimming pool; a boat passing before the entrance of a cave as a great black bird swoops by; a girl dressed in white, clambering high in the branches of a vast tree on a starlit night: these are some of the strange and poetic recent subjects of the painter Peter Doig, the subject of a major exhibition at the Scottish National Gallery this summer.

Doig, who was born in Edinburgh, raised in Canada, studied in London and now lives in Trinidad, is known for his rich, shadowy, mysteriously suggestive images, which draw on his observation of the natural world as well as images seen in photographs or films – such as Girl in White with Trees, a detail from which is pictured right. He is also known for the extraordinary prices his works realise at auction: his Architect’s Home in the Ravine was sold for £7.7m at Christie’s auction house this year.

The exhibition, called No Foreign Lands, will show 120 works made over the past dozen years, including a handful of freshly completed paintings that have never been shown in public before. He continues to draw on his life in Trinidad, where he has lived with his family since 2002, and which, he said, “continually poses possibilities for painting, in a different way from London or New York. In Trinidad you might see something just on the walk to the studio. It’s hard to explain; it’s just that kind of place.”

When Doig came to prominence in the 1990s, his figurative painting was somewhat out of kilter with the neo-conceptualism of the Young British Artists (YBA). He became known for pictures suggested by the landscapes of Canada, but with surface patinas and patterning that hinted that he was at least as interested in the formal language of painting as in representing the world he saw.

According to Keith Hartley, the curator of the exhibition, “he is trying to get some kind of balance between something he’s seen in reality and can’t get out of his mind, and being pulled in a formal direction”.

Doig’s work has always defied easy categorisation. “You can’t place him in any fashion or school,” Hartley said. “He’s not a YBA, he’s a free spirit.”

Unlike the ideas-based works of many of his peers, Doig’s paintings are, rather, situated in the world of purely visual thinking. Doig himself said he enjoyed his slightly off-centre world, in dialogue as much with the painters of the past, such as Matisse, Bonnard or Degas, as with his own painter peers.

“I never minded being a bit on the outside; I liked that painting was marginalised, a bit of a niche activity. I’m not saying it’s clandestine, but other people who make paintings: that’s who your real audience is,” he said.

His work has the “kind of authority that can’t be striven for, but only arrived at like an unexpected gift”, according to the Guardian art critic Adrian Searle.

No Foreign Lands: Peter Doig is at the National Gallery of Scotland, Edinburgh, from 3 August to 3 November.