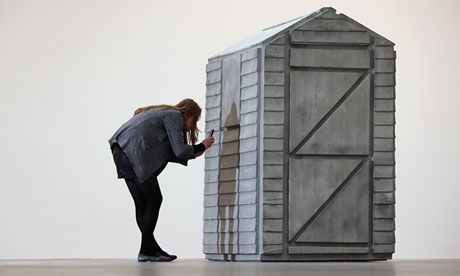 One to watch … Rachel Whiteread’s Detached, at the Gagosian Gallery in London. Photograph: Dan Kitwood/Getty Images

This article titled “Rachel Whiteread and the decaying streets of Palermo – the week in art” was written by Jonathan Jones, for theguardian.com on Friday 19th April 2013 10.23 UTC

Exhibition of the week: Rachel Whiteread

A truly important modern artist shows new works that continue her haunting meditation on the visible surfaces and hidden interiors of the world.
• Gagosian Gallery, London WC1X, until 25 May

Stephen Willats
This seminal figure in British conceptual art has worked with Oxford communities to create art about communication and – as we said back in the day – signification.
• Modern Art Oxford, Oxford, from 27 April until 16 June

Fiona Rae
Inventive, playful paintings that evoke the complexity as well as energy of modern life.
• Towner, Eastbourne, from 27 April until 23 June

Pieter Saenredam – The Interior of the Grote Kerk at Haarlem (1636-37)
A church is eerily seen as an empty space, its gothic columns like abstract sculptures. This powerful artist obsessed with the shape of buildings is the Rachel Whiteread of the 17th century.
• National Gallery, London WC2N

What mashups, Zambian moon walkers and Bertolt Brecht have in common

Why Modern Toss are making a F***yeux Tapestry

That gov.uk – known as the “Paul Smith of websites” – has won Design of the Year

What Man Ray looked like kicking back at home

Share your art on the theme of home now

Or check out our Tumblr