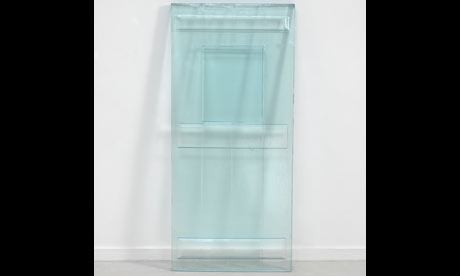 Doors of perception … Rachel Whiteread’s Circa 1760 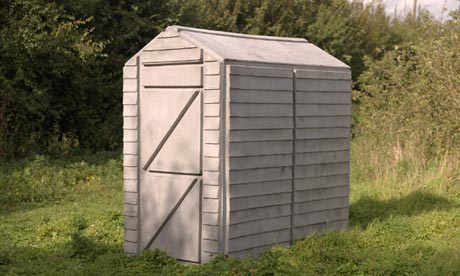 Three concrete sheds stand on a concrete floor. I look down, to check I haven’t turned into a concrete garden gnome. There are few signs of life. No birdsong. No tinny football commentary or muffled sounds of sawing and cursing. No reek of homebrew or fug from a paraffin heater. All you can hear at Gagosian’s Brittania Street gallery in London are phones ringing, keyboards clacking and the hollow echo of tube trains rumbling by. We’re not down the allotment.

Rachel Whiteread has been casting the spaces under chairs, inside objects, whole rooms and entire houses for 30 years. This has been the core of what she does: she makes space and air solid. Where space stops, her sculpture begins.

Nor does she cast any old thing. All her work is highly associative: a hot-water bottle, a room in a Victorian terrace in north London, an about-to-be-demolished house in the East End, a New York water tower, the fourth plinth in Trafalgar Square, a boathouse on a Norwegian fjord. Her art is cumulative. Lately she has also been working with unfolded cardboard packaging, tin cans, old sheep bones and small objects she has collected. I don’t know where these small works are leading. They’re like sketches.

The surfaces of her sculptures bear the imprints and contours of the solid things she uses as moulds. This is true of all casts – they lead us back to the absent thing itself (witness the casts taken from the spaces left by the dead beneath the ash of Pompeii). Absence is perhaps the thing Whiteread is most intent on capturing. Casts from life always look dead. Casts from dead things take on a life of their own.

These are not sheds. They are the negative casts of spaces inside such rudimentary habitations. Just as Whiteread was not the first to cast the space under a chair (Bruce Nauman did that, and perhaps he wasn’t the first either), nor is she the first artist to use the humble shed as subject matter (Cornelia Parker once had the army blow up a shed, then displayed its exploded shell and contents). Nor is she the first to focus on the dwelling, or the room, or to be interested in the interior void. But having common territory or forebears doesn’t diminish an artist’s work. Unless an artist isn’t merely aping a style or convention, they make the associations multiply, and the world become richer. At her best, Whiteread does this.

The sheds occupy the larger space at Gagosian. The smallest, with its pitched roof, stands at a wonky angle. It has the air of a sentry box. The other two are reminiscent of the second-world-war concrete pillboxes that still litter the countryside. But they’re not: they’re common-or-garden prefabricated sheds. Seeing them in the gallery is very different to looking at them in the accompanying catalogue, where they are photographed at the edges of orchards, in fields and beside small farm ponds. I would much rather come across them standing on grass and in the weather, where they seem to belong, than against the white walls of a gallery. Having Ghost inside a gallery seems right (it is a room-within-a-room). Placing her Water Tower inside a gallery, rather than on a Manhattan roof where at least it gives the idea that it belongs among its emblematic neighbours, would feel wrong. Bringing Whiteread’s sheds indoors feels a bit awkward. The bronze cast of an old box, sitting near a corner on the floor, stops the arrangement from looking too regimented or too much like a shed showroom.

In the adjoining space, a number of casts taken from doors and windows hang and lean against the walls. With their pallid tinted translucences, these objects are almost pretty. The palest almost dissolve as you look. The best appear weightless and immaterial. The colouring, as well as the arrangment of the doors’ planks and crossbars, remind Briony Fer, writing in the catalogue, of the paintings of the late Agnes Martin. The details of Martin’s work really count: the wobble in a coloured pencil line or the evidence of handmade, repetitious labour in her paintings are reduplicated by the imperfections. In the same way, the dents of age – the shape of an old hinge or mortice, the woodworker’s craft with the material – distinguish Whiteread’s casts of these sometimes very old doors. One is titled Circa 1610, and I assume that is the age of the door she has cast.

You look into and through these resin doors and windows. You look at the sheds. Something strange happens when I turn from the doors, whose surfaces keep escaping definition, back to the sheds. Sight feels abraded by the obdurate concrete surfaces. They resist penetration. My vision crawls like an ant over the surfaces. Slowing down the way you look is more than a side-effect of what Whiteread does. She makes you attend to the smallest detail. This is a strength.

Whiteread’s development, like Martin’s, has nothing to do with sudden leaps, novel effects or an evermore hysterical, market-driven demand to entertain. This circus is vomit-making. Meanwhile, Whiteread’s work is always the same yet always different, and the differences are enough to give us pause.