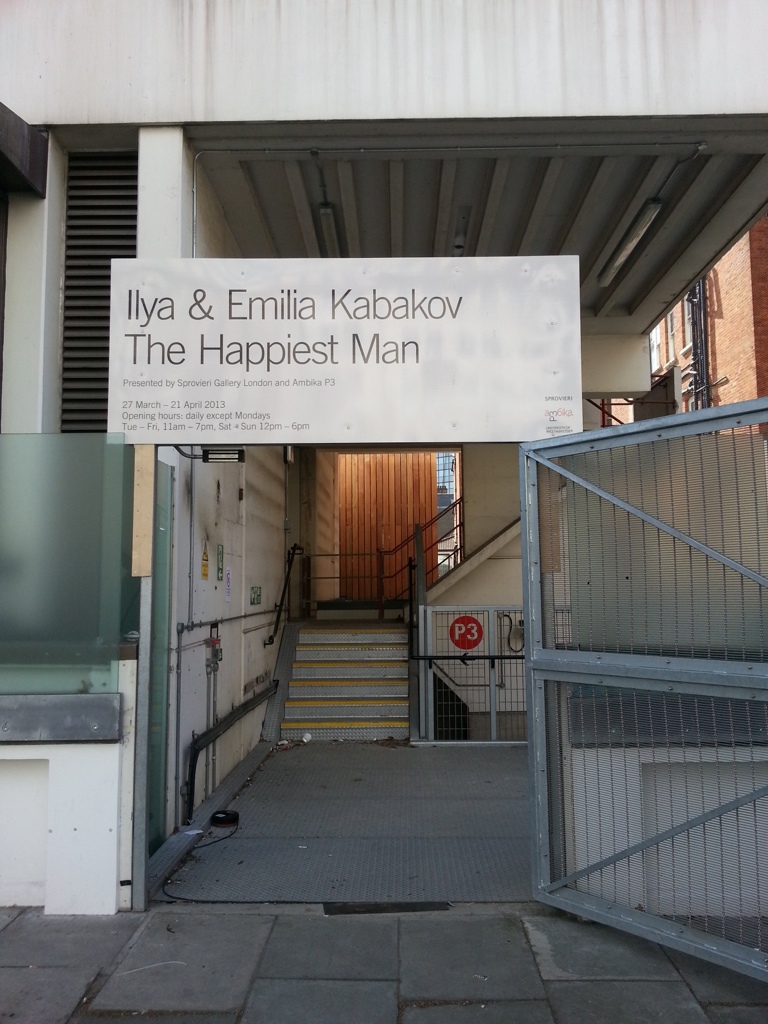 The unique exhibition space known as Ambika P3 has already been home to Kinetica Art Fair this year, and is soon to host the Other Art Fair later this month. For the moment it is hosting an installation by famous art duo Ilya and Emilia Kabakov, Russia’s famous contemporary installation art duo and one of the most original artist groups to have emerged from the former USSR. Collaborating since 1987, the pair have produced almost 200 installations, most of them immersive walk-in experiences that unsettle and destabilise traditional understandings of nostalgia.

“The Happiest Man” is in fact a recreation of an installation initially staged at the Jeu de Paume in Paris in 2000. It was chosen to be reinstalled in 2013 by the couple, partly due to its the turmoil the world has found itself in during recent times and partly due to its universality – the desire for a paradise or Utopia has always been a communal one.

The artists have turned the entire cavernous space into a deserted cinema that plays scenes from Soviet-era films. The imagery is colourful, the characters beautiful, the atmosphere joyous, and every scene features people singing together. Each scene depicts an idealised vision of people enjoying their everyday lives as a kind of paradise in itself, going about their tasks with enthusiasm and hope for the future. Set slightly apart from the cinema is a small living room furnished down to the last detail, with a window from which the same cinema screen can be watched. According to the artists this is the environment of the Happiest Man, who constantly watches the screen outside his window and lives not in time but in the fantasy being created by the films.

Intended as a metaphor for an escape from reality, the installation is overwhelming because it is incredibly easy to get sucked into, especially from the separate room . The comfort of the furnished surroundings facilitates a kind of saturation of the films, their propaganda imagery is somehow easier to accept and more welcoming when experienced from within the mind of the “happiest man”.The Kabakov’s installations are a combination of an analysis of Soviet cultural stereotypes combined with the condition of Man and his desire for escape from reality. The added theatrical element of the installation makes “The Happiest Man” a total environment into which the spectator is immediately immersed – a world of the everyday and imagination depicting different things depending on our vantage point. By doing this the Kabakovs are also playing with the idea that under communism, despite millions of deaths, to the outside world the Soviet way of life was portrayed as a paradise.

An interesting element of the installation was the use of space in the little adjoining room and its potential to create conversation. I went to see the installation on a cold rainy day, and found myself sat in the room with 4 other people for over an hour watching the same scenes. In the room with me was another woman planning on reviewing the show, and a couple – the woman from the UK and the man from Lithuania. Both were sharing stories of the conditions under which they grew up and comparing each other’s views of the East and West.

Whether irony or sarcasm, one thing that cannot be denied is that the Kabakovs have portrayed a vision of Soviet Russian life due to their use of paradise as a universal metaphor, and their own background of Russian origins but removed from their roots and living in the West. Despite its simplicity the effects of the installation are immediate and powerful – I came to see it out of curiosity but was definitely not prepared to feel a nostalgia that I know is not my own.

“The Happiest Man” will run at Ambika P3 until April 21.

Alongside the installation the Sprovieri Gallery in Mayfair is showing a series of mountain paintings by the pair.