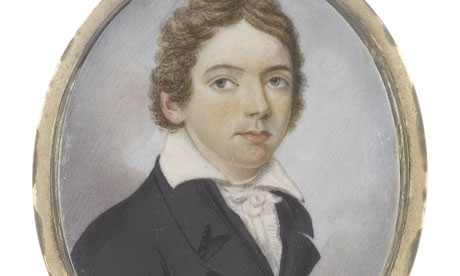 A rare portrait of John Keats, unusually showing the poet meeting the artist’s eye rather than gazing melancholically into space, has come to light in the hands of an American owner.

Most contemporary images of Keats are derived from Joseph Severn’s miniature of the poet, in which he rests his head on one hand, looking wistfully at a point behind his friend. This new image does not stem from this work or any others made during his short life, and is therefore believed to have been painted from life, according to Bonhams auction house. It is “unique”, said head of miniature portraits Jennifer Tonkin, as the pictures of the poet which do exist “rarely show him looking directly at the viewer”.

The miniature, which is ascribed by Bonhams to the “circle of [painter] Charles Hayter” is set to be auctioned by Bonhams next month, and is expected to raise between £10,000 and £15,000. Tonkin said it “has the power to move anyone who has ever admired Keats’s work”.

She dated the image to between 1810 and 1815, judging by the clothes – a black double-breasted coat and waistcoat, white frilled chemise, stock and tie – that Keats is wearing in the portrait. Keats would pass his exams to become a doctor in 1816; by 1819 he had published The Eve of St Agnes, with Ode to Psyche, Ode to a Nightingale and Ode on a Grecian Urn all written the same year. In 1821, aged just 25, he died in Rome, and was buried by Severn in the protestant cemetery in that city, his grave inscribed, “Here lies One Whose Name was writ in Water”.

The miniature is housed in a gold frame, with sprays of dark blond hair glazed to the rear. Tonkin said this was “probably” Keats’s own hair. “It is quite amazing,” she said. “It is generally accepted that hair in the back of miniatures of the time is the hair of the sitter.”

The portrait will be auctioned on 30 May, together with Earle Vonard Weller’s 1933 book, Autobiography of John Keats: Compiled from His Letters and Essays, which uses an image of the miniature on its frontispiece.

Clara Woods, the child who can only talk through her painting