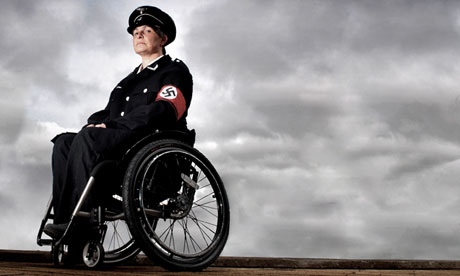 This article titled “Artist-activist Liz Crow’s ‘bed-out’ for disabled rights” was written by Bim Adewunmi, for The Guardian on Tuesday 9th April 2013 18.00 UTC

Liz Crow opens her front door on a bright afternoon, turning her wheelchair to avoid her cat. In a few days, the artist-activist will begin her new project, Bedding Out, which she describes as a “sort of un-performance”. Crow is no stranger to the public element of her work: she once sat in a wheelchair wearing a Nazi uniform on the fourth plinth in Trafalgar Square, her contribution to Antony Gormley’s One and Other project (the aim was to draw a parallel between the Nazis’ oppression of disabled people and the discrimination they face now). But she admits to feeling anxious. “It’s quite a strange thing, being in a performance arena, but actually being more honest about myself than I am in real life,” she says. “The worst that could happen is that people think I’m ridiculous.”

In the grand tradition of Yoko and John, Tracey Emin and Tilda Swinton, Bedding Out has a bed at its core: Crow will be living her “bed-life” at the Salisbury Arts Centre for 48 hours, streamed online with audio, British Sign Language and live captioning, plus a Twitter feed.

“For about 30 years, I’ve been aware that I operate in two starkly different modes,” she says. “One is public, where I try and come across as energetic and animated and engaged and good at what I do. It’s a way of being that’s approved of socially. But what people don’t see is the other side, where I spend most of my time at home, a great deal of it lying down in my bed. That’s in order to prepare for the public thing, and to recover from it. I’ve always kept that hidden because it feels dangerous to make it public. It feels like I’d be misinterpreted and people won’t see me as the whole person that I am.”

Part artwork, part protest, Bedding Out coincides with this week’s change in benefits for disabled people in the UK. On 8 April the Personal Independence Payment replaced the Disability Living Allowance, raising concerns among disabled groups, and charities from Carers UK to Scope, that disabled people’s access to benefits will be reduced.

Crow doesn’t want to disclose her disability “because Bedding Out will become about people with X impairment,” but adds: “What I can say is that I have a largely invisible impairment, with fluctuating, unpredictable symptom levels, like a significant proportion of disabled people.” Now 48, she has used her wheelchair for 25 years.

How will the changes affect Crow personally? “I haven’t been called up for reassessment yet, but there is a risk that I will lose the mobility element, which is what gives me access to a wheelchair-accessible van,” says Crow. “The greater risk for me is that I will lose the personal care side of it. I have managed my life, my home and my parenting” – she has a daughter – “for the last 20 years through personal assistance. The personal prospect is terrifying, and I am aware that there are people facing far more frightening levels of change than I am.” Last year, Crow attended a tribunal hearing to rectify being placed in the wrong Employment Support Allowance group, an experience she calls “bleak and frightening”.

Her 48-hour bed-out will include five scheduled “bedside conversations”, four with members of the public or of an arts and disability symposium, and one on Twitter. The social media element is important, says Crow. When she performed a version of Bedding Out at the Spill arts festival last year, “I was contacted by a number of people who said they felt represented for the first time, and would like to be there but had their own bed-life. It’s a life that’s lived in a fair degree of isolation, and social media is breaking down the isolation.”

Crow hopes the work will make non-disabled people realise that “there is a swath of society that is absolutely invisible”. Despite its primary function as a call for a more humane benefits system, she sees Bedding Out as part of a wider movement. “It’s very easy to fight one group’s corner, but what is happening is about all of us. Disabled people were one of the first targets for cuts, and the newspapers were silent on that for two years. What I have seen that completely delights me is that after a period of direct action kind of losing its way, there’s a groundswell – disability rights groups like Spartacus, Black Triangle and so on. And the way those people have worked together epitomises what we should be as a society. That’s the kind of world I would choose to be in.”