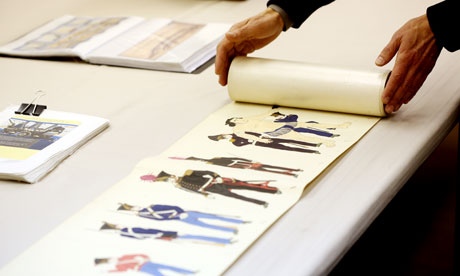 The Japanese scroll is not signed, but the British Museum believes it is the work of two artists, one disguised as a physician. Photograph: Graeme Robertson for the Guardian

A Japanese scroll showing in meticulous detail the arrival of the US fleet led by Commodore Matthew Perry in 1854 has been acquired by the British Museum.

The hand-painted scroll, depicting a key moment in Japanese history that ended centuries of isolation and opened up the country to western trade, unrolls for 15 metres (50ft). It gives a scene-by-scene account of the day, in which the Japanese remain stately and dignified but decorum seems to break down among the Americans, at a formal banquet one hides some of the food in his hat, while others turn the porcelain serving bowls upside down to study the maker’s marks.

Tim Clark, the museum’s keeper of Japanese collections, has been wrestling with a colleague at Osaka University to translate the formal language of the preface, written in Japanese but with Chinese characters. In part it reads: “Mr Maruyama has employed an artist to paint this not just for amusement, of course. The main purpose is simply so our descendants in future generations will get a vivid idea of how great was the authority of the Shogunate [military ruler] on this occasion.”

It is hard not to imagine the descendants rolling on the floor with laughter at the absurdity of the Americans. As entertainment the Japanese offered sumo wrestling, and one image shows the gigantic sportsmen standing impassively as the incredulous Americans, who appear to have drunk something more than green tea, poke and prod at them. In return, the Americans offer their own startling entertainment – a minstrel show performed by members of the crew in blackface.

“I think you have to imagine this scroll being unrolled for private delectation perhaps after a very good dinner,” Clark said.

After decades when foreigners and foreign trade were permitted only in one port, Perry had arrived with three ships in Edo Bay in July 1853, with a letter from US President Fillmore asking to open trade relations.

He promised, or threatened, to return with more ships, and the scroll opens with the horizon ominously crowded with black ships, including paddle steamers, which clearly fascinated the Japanese artists.

The landing party includes a brass band and a small group carrying the coffin and carved wooden grave markers for a sailor who died on board two days earlier. Curiosities such as American steel-framed umbrellas and the musical instruments get their own panels, along with gifts presented including a miniature train and track.

Rowdy behaviour by the cabin boys, and their later dressing-down from the American officers, also attracts the artists’ attention.

The day ended with the signing of the treaty of Kanagawa, between the US mission and the representatives of the Shogun, which laid the foundation for further treaties, the opening of the trading ports, and the rapid transformation of Japan.

Other representations of the day are known, including much more straight-faced US versions with illustrations and photographs. However the new acquisition is the most comprehensive view from the Japanese side, made four years after the event but based on sketches on the day.

The scroll is not signed, but Clark believes it is the work of two artists who were actually there, one disguised as a physician to a magistrate who was one of the main negotiators, the other as his medicine-box carrier.

The later history of the scroll is unknown, but Clark was alerted to it by a London dealer, after the Japanese government granted it an export licence.

“I had no idea it existed – when he unrolled it for me first I did feel a bit weak at the knees,” he said.

The present display in the Japanese galleries ends with the arrival of Perry, symbolic of the birth of modern Japan. The museum has acquired the scroll, thanks to several grants and donations, for £400,000.

The paintings, on silk-backed paper, are in astonishing condition. There was some worm damage to the scroll, but confined to the unpainted margins.

The artwork will be on display for the first time in the Japanese galleries at the British Museum from 17 April until October, but since there is no case large enough to show the whole thing, it will be rolled on each month to reveal more scenes. An online gallery will be at www.britishmuseum.org.