Fabrice Hyber: but is it fruit? - FAD Magazine
Skip to content 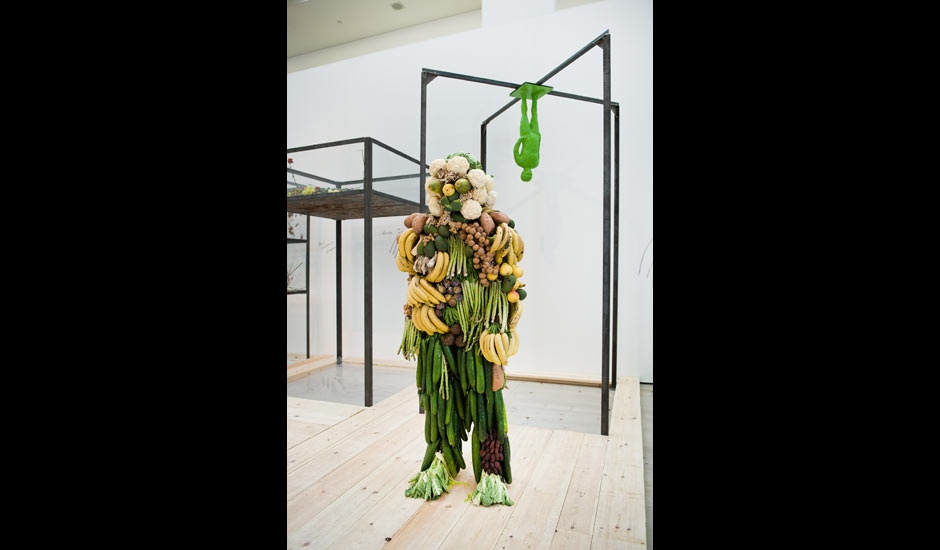 You are what you eat … MIT-Man, 2007, by Fabrice Hyber. Photograph: Colin Davison

This article titled “Fabrice Hyber: but is it fruit?” was written by Adrian Searle, for The Guardian on Tuesday 26th March 2013 18.30 UTC

A big, inflatable cloud hangs overhead, and a slanting rain falls inside the Baltic in Gateshead. It’s only cartoon rain, made from yards and yards of fishing line, which tether the cloud to the gallery floor. Where would artists be without nylon monofil? It’s a lumbering idea, as dreary as the weather Fabrice Hyber is trying to emulate.

Hyber’s show has travelled from the Palais de Tokyo in Paris, and now fills the Baltic’s top floor with his ruminations on climate and stem cells, sunshine and storms, cycles of growth and decay. There’s a lot of weather here, though it isn’t a comment on our terrible climate or the drizzle in the English soul. The singular pleasure of this exhibition lies in what happens behind the three closed doors of the little sheds he has built in the gallery. One contains a scatter of rainbow blips of watery sunshine. Another shed contains a thunderstorm, with lightning flashes, dark rumbles and water falling on the sodden duckboards at your feet. The third had me backing out with a yowl, my scarf unfurling behind me. I don’t want to spoil it for you, but do note the enormous electric fan built into the shed’s side-wall, which turns itself on as you enter.

Then there’s the mountain of cocaine. Actually, it is salt, but it looks like the biggest pile of coke in the world. I am allergic, but do try some. Then go and flush out your sinuses in the two side-by-side sinks installed near the sheds. These are a surprise, too. Turn the tap in one sink, and the water gushes from the faucet in the other. I had a plumber who did things like that. The salt sits alongside mounds of red chilli peppers, natural sea sponges and 400,000 shiny copper coins, borrowed from the Paris mint. All that lovely lucre makes me go all giddy, though it could be the heady aroma emanating from the big polypropylene vats nearby, half-filled with apples and grapes, just beginning their process of decay and fermentation.

Flowers wilt and rot in metal cages. All this reminds me of Anya Gallaccio‘s early work, but seems more thrown together and much less poetic. Standing among it all is a life-sized man made of fruit and veg, like an Arcimboldo painting come to life. I guess the point is that we are what we eat. The whole thing is tripe, really, as unoriginal as it is indigestible.

Hyber also draws and makes what might be taken as paintings. They look a bit like Joseph Beuys’s diagrams, without all the heavy breathing and Beuys’s mental baggage. Beuys’s thought was largely claptrap, too, yet it evidenced a rich and baggy imagination, and he produced some wonderful things. Hyber has a lighter touch, but there doesn’t seem to be a lot going on in there.

Lets talk about lipstick. There’s a whole cubic metre of the stuff, and it’s not my colour. Waxy and red and dumb-looking, it is in fact a wooden cube with a thin covering of Yves St Laurent No 1 rouge lippy, like a transvestite bit of minimalism. But this is no queering of the minimalist aesthetic, nor a critique of macho 1960s art. Hyber sees it more as a cubic metre of beauty. If only. Anti-sexy and inert, the red cube is a distant cousin to Beuys’s famous lump of lard on a chair.

Hyber used to be called Hybert, but chopped off the final “t” for some reason. He is trifling with us, and this show of lo-cal ideas and casual gestures may be full of stuff, but is lacking substance. A self-portrait sculpture has the artist looking like a monk in a habit, in a fishtank full of water and gurgling bubbles. The figure could almost be a plaster saint, its bland face lost among the froth.

The weather improves a bit towards the rear of the gallery, where it’s a good drying day, as evidenced by row after row of closely spaced washing lines draped in scrim and translucent cloth, on which Hyber has written little phrases and made cursory drawings. You are invited to wander on fake grass through the 20 rows, as if rummaging through the artist’s brain. Pictographic suns, spirals, the odd portentous phrase: “Heavy time”; “virus slave”. These are thoughts hung out to dry. Hyber recently accepted the 2014 Monumenta commission for Paris’s Grand Palais – following Richard Serra, Christian Boltanski and Daniel Buren – although it looks likely the French government will cancel the project due to the economic climate.

At the back of the gallery is another little chamber. Entirely constructed from empty fridges, with their lights on and doors open, I thought about the profligate use of electricity and the effect on the planet. Hyber thinks of his show as a “mental spa”, so I suppose all this is cleansing. I just got a bit hot under the collar, as well as hungry, my toxins raging.