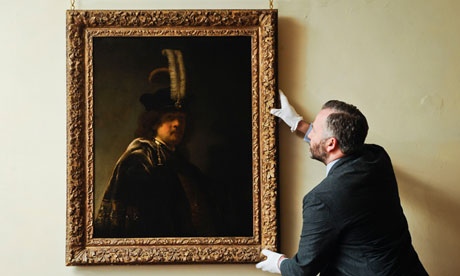 This article titled “Self-portrait bequeathed to National Trust is identified as lost Rembrandt” was written by Maev Kennedy, for The Guardian on Monday 18th March 2013 06.00 UTC

A portrait of a man with a wry expression and an absurd hat, bequeathed to the National Trust as a good but anonymous and relatively low-value 17th-century painting, has been identified as a self-portrait by Rembrandt van Rijn worth up to £20m – though the trust has said it will never be sold.

Despite being signed by Rembrandt and dated 1635, when he was 29, the painting was thought to be a later copy, or at best the work of a pupil.

If the identification – confidently made by an internationally renowned expert on the Dutch artist – is upheld, the painting now hanging in the dining room of Sir Francis Drake’s old home, Buckland Abbey in Devon, will be the only Rembrandt among the 13,500 paintings the trust owns or cares for.

In 2010 the trust was given the painting from the estate of the late Edna, Lady Samuel of Wych Cross, the widow of a West Country property developer who was also a renowned art collector, but it spent almost two years in storage.

It was not seen as a painting of such importance that it should go on instant display, even though it had an illustrious pedigree, with previous owners including such famed art collectors as the princes of Liechtenstein.

Eventually the pictures in the dining room at Buckland Abbey were rearranged to make way for the man in the flamboyant cloak, where it was recently examined by Ernst van de Wetering, a Dutch art historian and chair of the Rembrandt Research Project, the Netherlands-based organisation which is the acknowledged authority on his work, and rules on the rival claims of hundreds of paintings across the world.

Rembrandt is often hard to identify because he was frequently short of money – and eventually bankrupt – and took in many pupils and studio assistants, and was so renowned that he was copied even in his own lifetime and ever since.

Although further research will be carried out next winter, when the painting will be cleaned and x-rayed, studied by infra-red light, and the pigments and materials analysed in microscopic detail – the £20,000 cost will be funded by the People’s Postcode charity lottery – Van de Wetering is convinced it is genuine. The research project last looked at the picture in 1968, and concluded it was probably the work of the artist’s pupils.

“Over the past 45 years we have gathered far more knowledge about Rembrandt’s self-portraits and the fluctuations in his style,” Van de Wetering said. “In 2005 I published an analysis of the genesis of the painting on the basis of an x-ray. This analysis and newly found circumstantial evidence remarkably increased the likelihood that the painting was by Rembrandt himself. But, to be sure, I had to see the painting again for myself.”

David Taylor, the curator of paintings and sculpture at the National Trust, said the new identification was “incredibly exciting”, and added: “This portrait is now one of our most important works of art.”

Buckland Abbey, a former medieval Cistercian abbey, was the home of Drake, the sailor who circumnavigated the globe and was knighted by Queen Elizabeth I. It was given to the National Trust in 1946. It still has many objects associated with Drake, including a famous drum said to have gone round the world with him and to be heard beating again when England is in danger, but the house had lost a famous collection of old master paintings.

The newly recognised portrait will remain on display for the 2013 season, before being returned to the experts next winter.