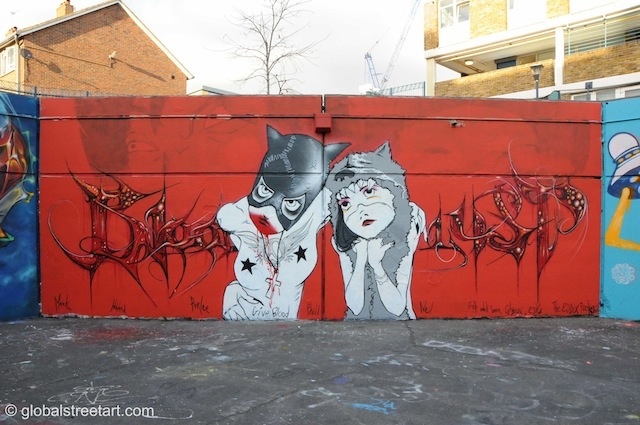 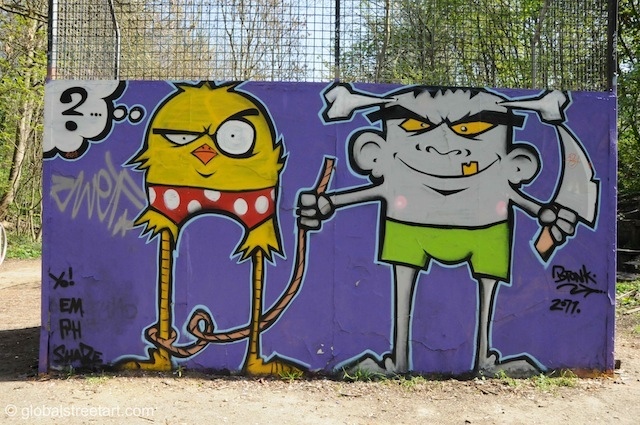 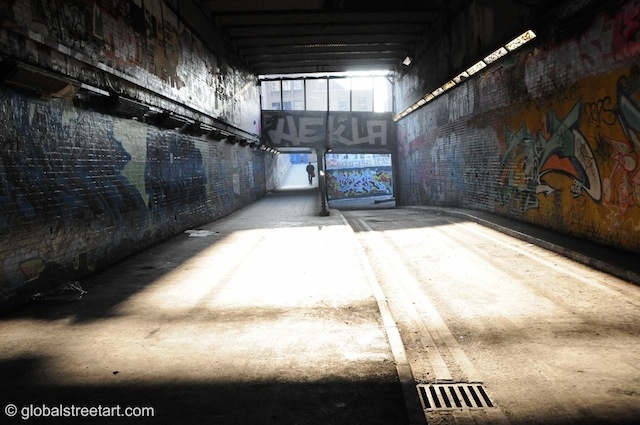 The sunken ball courts at Stockwell Park Estate (also known as ‘The Pen’) are on Aytoun Road (see this map link). There is enough space for roughly 20 graffiti pieces, which change over almost every week during the summer. Photographs of the pieces here posted on the internet have led to a culture of international graffiti writers wanting to paint there. One local writer, Solo-1, pours a huge amount of time and effort into keeping the place clean, and the impact has been measurable over the past decade. You’ll often see superb pieces by Bonzai, Lovepusher, Cemo and Solo-1, among many others. Community Trust Housing is well-aware of the cultural value of the space and often takes tours of councilors around the ball courts. Also, if you’re in the area and looking to take pictures of graffiti, Brixton Skatepark is a short walk away.

East London is the centre for street art within the city. Seemingly limitless stencils and posters adorn the area, as well as more traditional graffiti pieces. From Old Street station you can walk down Great Eastern Street towards Brick Lane, ducking down Rivington Street, Curtain Road and Redchurch Street en route. Check out the walls by Village Underground (Great Eastern Street and Hollywell Lane), including the commercial wall the lovely folks at End of the Line run. There are other side streets with art along the way, and more just off of Brick Lane itself. Check out the giant Phlegm mural on Heneage Street (off of Brick Lane) that Global Street Art arranged!

As West London has become more gentrified in the past 10 years, the amount of graffiti has fallen. There are still some places where great graffiti can still be seen, however, and the bottom of Trellick Tower is probably the best. It’s a relatively large space with high walls, where you can check out work by talented writers such as Vibes and Roids. Thanks to the efforts of various writers, who help keep the space clean, the quality of the graffiti in Trellick Tower has gone up over the past year, with writers typically painting larger-scale pieces.

Leake Street is just around the corner from Waterloo Station. It’s by far the most accessible and convenient graffiti space in London and was the site of Banksy’s 2008 Cans Festival. New work goes up all the time but, sadly, a lot of it does not last long enough to get good pictures. Good work is often tagged over quickly. Sometimes you might get lucky and see some cool pieces by Tizer, Cept, Parlee and others, especially just after a jam or on a writer’s birthday.

After the top few locations, there are quite a large number of smaller graffiti spots around London, from ball courts to skateparks. Parklands walk is a former railway track that became a popular path for joggers and dog walkers. It runs from near Highgate Station (entrance off of Holmesdale Road) to Finsbury Park. There are a few bridges along the walk, a youth centre and a playground or two where graffiti is either legal or tolerated. Occasionally, you might see pieces by the Toasters, Whome and some of the Burning Candy folk. If you’re in the area you can also pop up to Alexandra Palace; there’s a skatepark there with space for a few graffiti pieces you can photograph.