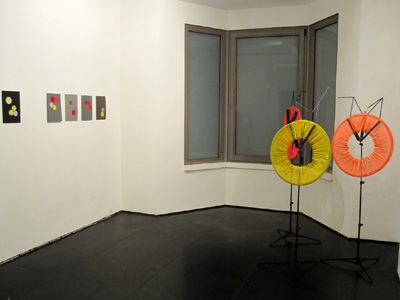 With SURYA, Deepa Chudasama is returning to the gallery with new works on an expanded scale. Continuing to work with mundane man made materials Chudasama’s ready-made wall sculptures focus on the value of ‘ throwaway’ consumer goods in the growing super economies such as India, Brazil andChina.

Ruth Barker is an artist whose main practice consists of vocal and text-based works. For her first presentation at the Agency she will present the performance piece ‘Mouth Open In An Open O’. Ruth Barker’s states “ that the act of retelling a myth is a way to describe and know the fundamentals of the human condition”. The re-making of the mythic space of performance becomes a gesture towards the ritual and/or artistic understanding of self, gender, and mortality. The live performance will take place at 7pm.

Deepa Chudsama participated in Message to India, a British Council touring exhibition, two prior solo shows at the Agency and has created a number of public commissions including recently a permanent installation at the Royal London commissioned by Vital Arts and works for the new Alexander Pringle Unit at NHM (supported a./o by Arts Council of England), as well as international private collections.