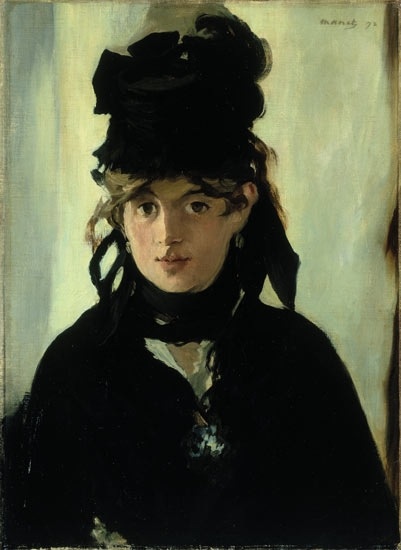 Manet: Portraying Life opens with a coup – The Luncheon from 1868. The scene occurs after the meal. In the background, spectral as the fading day, a maid hovers with coffee. In the middle distance, a shadowy man drags on a postprandial cigar. But on our side of the room a boy leaning nonchalantly against the table’s edge is brilliantly lit (almost floodlit) and cocky in his tipped hat, one knee pressing directly towards us. It is as if he has stepped out of their room – their moment, even their painting – and into our world.

After nearly 150 years, The Luncheon remains extraordinarily startling. What it shows is disassociation, longueur, possibly impasse; and yet it’s a feat of brinkmanship, from the blade about to fall off the table – knife-edge – to the queer triangulation of distanced figures, the burning black of the boy’s jacket to the pale linen of his leg, bending out into our space – “breaking the wall” of the painting, as Zola put it.

Does it matter that we know who they are, these painted people? The smoker is a fellow painter, Auguste Rousselin. The boy is Léon Koëlla Leenhoff, who may have been Manet’s own son, or even his father’s son as some evidence suggests. But son or half-brother, Léon is not sitting for a portrait. He is playing a part in a carefully composed scenario, as he did in more than a dozen of Manet’s paintings. He is real, irresistibly real in fact, but the picture is conspicuously stage-managed. You might say that he is not so much a sitter as a person posing in a modern painting.

Manet worked with models, painted straight (and sideways) portraits and cast family or friends in most of his paintings. Leaving aside the still lifes, nearly all of his work is portraiture. This exhibition wants to make a strong point of the distinctions, of the fine gradations between portraits and genre paintings, but it suffers from a devastating shortage of the latter. Olympia, A Bar at the Folies-Bergère, The Balcony, The Execution of Maximilian, Le déjeuner sur l’herbe – none of these ice-breaking masterworks are here.

And though the pictures are superbly hung, with masses of viewing room around them, there are only 60 in all, eked out with too many weak pastels of young ladies. One gallery is entirely devoted to a map of Paris, as if it deserved more space than Manet, and the portraits are so often accompanied by photographs and life stories that one might as well pursue the analogy and accept this as a biographical show.

In which respect it excels. Manet emerges as a family man – the opening room is composed like an album: his wife Suzanne at the piano, in pink, or with a cat on her lap. Léon pedalling fast on his bone-shaking velocipede, gangly knees sticking out like some silent comedy; or blowing a bubble, not in the manner of a Dutch genre painting announcing life’s brevity but genuinely exerting himself to keep the sphere balanced on his straw.

In Interior at Arcachon they have escaped the Paris Commune for the seaside, where Suzanne gazes out on the motionless expanse and Léon raises his circumflex nose from a book. The picture is quick with inquisitive tenderness. Back home, Manet paints journalists – the Communard Henri Rochefort returned from exile, a portrait as pock-marked and vital as its subject – and politicians. The brim of Antonin Proust’s hat throws a shadow over one shrewd eye, glittering in the dark. Georges Clemenceau, about to address the chamber without need of the notes that lie before him, folds his arms tightly as if to contain the bristling energy inside him. And Manet’s terse black line holds him together in turn, emerging out of the grey paint like a drawing coming alive, Pygmalion-style. This is an electrifying portrait.

Manet knew them all – Zola, Mallarmé, Baudelaire, Monet – and this vast gathering is testament to his gift for friendship, particularly with women. Perhaps the most devastating work here shows the painter Berthe Morisot at her father’s funeral, her cheeks sunken, one eye starting out of its socket with grief, the other almost in-turned with sorrow. It far exceeds anything by Munch.

One senses Manet’s restlessness at every turn. A windy day and the paint is breezy, bonnets and dresses a flurry of marks that only resolve, Velázquez-like, at a distance. A nub of creamy yellow gets a Rembrandt glint on the cup. Suzanne in the conservatory is as suave as a Degas but for the jungle of abstract marks growing around her; two paintings – two kinds of painting – in one.

Manet’s palette runs through mauve, silver, primrose and cobalt to innumerable blacks from glinting jet to dusty charcoal, with every colour of white. The draughtsmanship is quickfire, incisive, or softly fading like smoke. Paint lies dense and richly calorific, or light as the bloom on a peach. Pictures are scraped back (Monet reported) to look as if done at the first attempt, or heaped with little still lifes – lemon peel unspooling, a sword lying rigid on the floor. Ever-changing, constantly self-renewing, Manet sees no limit to the kinds of painting that can be made.

And even though the virtue of this show – uniquely, all portraits – is also its limitation, one still sees how strange, unpredictable and unfixed the portrait could be in his art. Mallarmé’s cigar ash lengthens as his eyes slip into cloudy thought, so that one senses the moment about to vanish. The actor Rouvière stands in his flat space, shadow dwindling to nothing. Léon leans coolly against the table, posing like a dandy, but his eyes are already veering away.

Our public and private selves are separate, that is what these portraits seem to declare. The very idea of people appearing in portraits is strange. And never more so than in Manet’s mysterious The Railway, which is not quite narrative, snapshot or portrait so much as a hybrid of all three, and the final coup of this show.

The woman and the child are locked in their famous triangle, one looking into the station as the train departs, leaving white steam in the air, the other looking up from her book with an inquiring eye, noticing that she’s been seen. A parade of railings spans the whole picture, coming between the portraits and the pure whiteness beyond – an abstract dimension, the very signal of modernity.