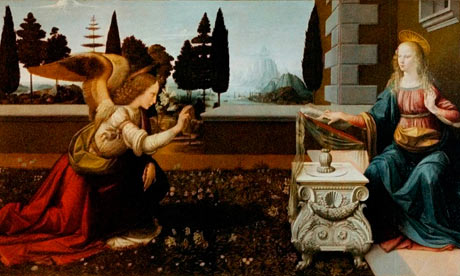 This article titled “How Leonardo da Vinci’s angels pointed the way to the future” was written by Jonathan Jones, for theguardian.com on Tuesday 25th December 2012 01.00 UTC

Leonardo da Vinci painted the most beautiful angels in the world. Since there are no actual angels, his pictures of them are literally the most real, the most gorgeous, the most magical that exist.

This is strange, because Leonardo was not a religious man. Although the National Gallery made a vivid case for him as a religious artist in its 2011 exhibition of his paintings, there is very little in his notebooks to suggest that Christianity was part of his everyday, personal life. Shopping lists are more prominent than prayers among his notes.

However compelling Leonardo’s religious paintings are, it has to be remembered that all are commissioned works. No painter could have a career in Renaissance Italy without creating altarpieces. It is therefore important to distinguish between a passionately Christian artist like Michelangelo and someone like Leonardo who left plenty of written evidence that he was more curious about Archimedes than St Augustine.

Leonardo conceals his heterodoxy within his paintings – his composition The Virgin of the Rocks is an idiosyncratic image with no parallel in Christian art.

He puts his own ideas and interests into his angels, too.

Leonardo painted the most electrically alive angel wings imaginable in his early work The Annunciation. These wings seem practical – the artist has thought deeply about how a pair of wings might fit on to a human body.

When the young Leonardo painted this, he could see a picture of a flying man in Florence – a medieval carving of the legendary inventor Daedalus wearing wings on the city’s bell tower. Daedalus flew with science, not magic. He made wax wings but when his son Icarus flew near the sun, the wings melted.

The wings of Leonardo’s Annunciation angel are Daedalan. They are designs for real wings. In this early painting, he is already pondering the mystery that would fascinate Leonardo all his life – how to build a flying machine.

Leonardo’s Annunciation angel is a prototype of the flying machines whose designs he lays bare in his notebooks. From the 1480s to the early 1500s he designed flying machines with bat-like wings and systems of stirrups, levers and pulleys for the pilot to power them with his own arms and legs. He planned a test flight in 1505 from a mountain outside Florence. The results are not recorded.

In the same years he worked on a second version of his painting The Virgin of the Rocks. The angel in this picture is subversive in a new way: it is androgynous. Leonardo melts gender in his image of this unearthly being. He creates a beauty so sensual it transcends male and female – a daring expression of his own sexual identity.

Flight, for Leonardo, is the ultimate human dream, and angels are futuristic glimpses of airborne humanity. In that release from earth, he glimpses liberation from the religious bonds that saw him twice accused of the crime of sodomy.