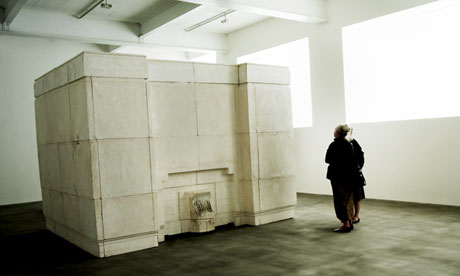 I just want to take a moment to salute Britain’s greatest living artist.

A few weeks ago I was in an American art museum looking at the modern masters. Pablo Picasso and Richard Serra share space with Sol LeWitt and Jackson Pollock in the tremendous collections of the National Gallery of Art in Washington DC. But not far from Barnett Newman’s Stations of the Cross paintings, an unexpected thing from home caught my eye.

It was like seeing a ghost. In fact, I was seeing Ghost – a sculpture by Rachel Whiteread that I first encountered, what, 20 years ago, in the London whose Dickensian chill it reproduces. Ghost is a cast of an entire room in an old-fashioned, perhaps Victorian, house. It is the solid trace of all the air that a room once contained. Empty space has become solid. Because it is solid, it is closed. Nothing can get in or out. On this side of the white surfaces of the massive block, engraved with negative images of fireplace, door, window and light switch, we wonder at the dark invisible silence within. Vanished lives, lost voices, forgotten loves are trapped in that fossilised room like prehistoric creatures in limestone.

Ghost is the closest living relative of Whiteread’s destroyed artistic masterpiece House. She made Ghost in 1990; three years later she took the same casting process to its logical conclusion by preserving the inner world of a house scheduled for demolition.

The subsequent destruction of Whiteread’s House by an unsympathetic council did immense harm to British art. Amid all the sound and fury that young British artists generated in the 90s – often signifying nothing – House was the real thing: a modern masterpiece.

And Whiteread herself is the real thing, a first-rank artist, as I realised with a new clarity in Washington. It goes to show why it is sometimes foolish to want to “save” British art for British collections. If all British art was in Britain, how would it become known internationally? In the absence of House, Whiteread’s Ghost is the single most important British sculpture of our times – but I am delighted it is in one of America’s best galleries. Here, among some of the key works of the modern age, you can truly assess Whiteread’s achievement. It is one of the most powerful things in the museum. Whiteread is abstract, serious and profound. She is the modern British artist who matters.