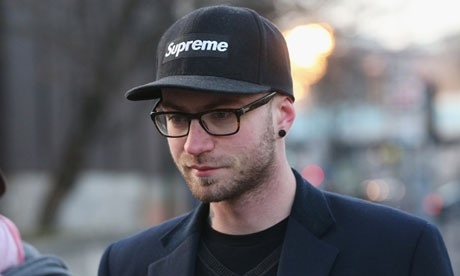 Wlodzimierz Umaniec arrives at Inner London crown court, where he was sentenced to two years in jail for a ‘wholly unacceptable’ act of art vandalism. Photograph: Oli Scarff/Getty Images

This article titled “Man jailed for two years for vandalising £5m Rothko at Tate Modern” was written by Mark Brown and agencies, for theguardian.com on Thursday 13th December 2012 13.04 UTC

A man who vandalised one of Tate Modern’s most cherished Mark Rothko paintings has been jailed for two years for actions the judge described as “entirely deliberate, planned and intentional”.

Wlodzimierz Umaniec, also known as Vladimir Umanets, a 26-year-old Polish national who lives in Worthing, West Sussex, pleaded guilty at a previous hearing to criminal damage in excess of £5,000. In this case it was well in excess, with estimates suggesting it will cost more than £200,000 and 20 months to restore.

Judge Roger Chapple, at Inner London crown court, said it was “abundantly clear” that Umaniec was “plainly an intelligent man” who regarded Rothko as a “great painter”.

The incident happened at around 3.25pm on 7 October this year, when Umaniec approached one of Rothko’s Seagram murals, Black on Maroon, took out a brush and some black paint and wrote his name along with ‘A Potential Piece of Yellowism’ in the corner of the work.

He later claimed it was an artistic act, comparing himself to Marcel Duchamp, whose appropriation of a urinal in 1917 led to him being regarded as the father of conceptual art. Umaniec had told the BBC: “Art allows us to take what someone’s done and put a new message on it.”

But Chapple, on the subject of “yellowism”, said it was “wholly and utterly unacceptable to promote it by damaging a work of art”.

Rothko’s Seagram murals, originally planned for the Four Seasons restaurant in New York, were a gift to the Tate by the artist in 1969 and are regarded as some of Tate Modern’s most important works.

The court heard that Umaniec went to the gallery intending to put his “signature” on a picture, but decided to damage the Rothko painting only at the time he saw it on display.

After it was discovered, the gallery was put into “operation shutdown” with people prevented from leaving or entering the building.

Chapple said the incident had led to galleries reviewing security arrangements at a cost to themselves and the taxpayer. “The effects of such security reviews is to distance the public from the works of art they come to enjoy,” he said.

Gregor McKinley, prosecuting, said: “Sotheby’s has given Tate Modern a verbal estimate of pre-damage value of approximately between £5m to just over £9m.”

The restoration will be long and difficult, not least because Rothko often used unusual materials, including eggs and glue, to create his works.