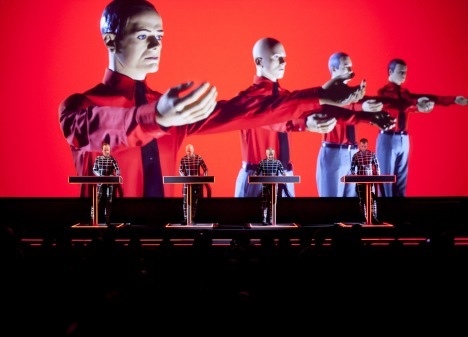 This article titled “Kraftwerk to bring Catalogue shows to Tate Modern” was written by Michael Hann, for The Guardian on Wednesday 5th December 2012 14.55 UTC

For a group so closely associated with a vision of the future, Kraftwerk certainly aren’t afraid to look back. The German electronic music pioneers have announced they will play eight nights at Tate Modern in London early next year, performing a different classic album from their catalogue each night.

Kraftwerk: The Catalogue 1 2 3 4 5 6 7 8 – billed as a visual art presentation more than a pop concert – is a replication of the shows the electronic music pioneers took to the Museum of Modern Art in New York in April and will perform at Kunstsammlung Nordrhein-Westfalen in Düsseldorf in January.

The performances will feature 3D projections and animation, as well as “new improvisations”. However, reviews of the New York performances did not dwell on improvisatory passages, and it remains to be seen how a band so dependent on technology – they leave the stage to be replaced by robots when performing their signature song, The Robots – can engage in musical flights of fantasy.

The first of the gigs, on 6 February, will be a performance of the 1974 album Autobahn. That will be followed by recitals of Radio-Activity, Trans-Europe Express, The Man-Machine, Computer World, Techno Pop and The Mix, before the residency concludes on 14 February with their most recent album, 2003’s Tour de France Soundtracks.

Tate Modern’s director, Chris Dercon, said: “As a former power station, Tate Modern’s Turbine Hall is an ideal venue for Kraftwerk’s explorations of technology, energy and rhythm. Bringing together music, video and performance, these events will be true Gesamtkunstwerk – a total work of art.”

However, the high ceiling and echoing acoustics of the Turbine Hall may make it a better place to present the visual-art side of Kraftwerk rather than their music.

The Kraftwerk of 2012 is a markedly different beast to the group that released Autobahn. Only Ralf Hütter, who founded the group with Florian Schneider in 1970, is left of the lineup that recorded Autobahn. Schneider officially left the group in 2008. These days Hütter is joined on stage by Fritz Hilpert, Henning Schmitz and Stefan Pfaffe.

Kraftwerk’s influence over modern pop is all but incalculable, and can be traced through David Bowie’s Berlin trilogy of albums, into the synthpop and new romantic movements of the early 1980s, through to the techno sound of Detroit in the 1980s. It continues to permeate music today.

Not for nothing have they been called the Beatles of electronic music for their pioneering approach to both the sound and creation of their albums; they record everything in their own Kling Klang studio in Düsseldorf.

In recent years the reclusive Schneider is believed to have taken a closer interest in cycling than in music.