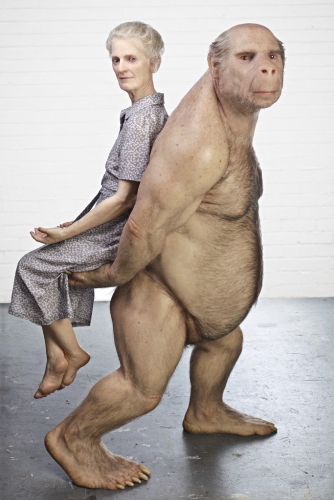 Piccinini’s work encompasses sculpture, photography, video and drawing and examines the increasingly blurred boundary between the artificial and the natural as it appears in contemporary culture. Through her work she explores both our desire to humanise technology and perfect or homogenise the human body, and challenges our capacity to accept those who don’t measure up to a manufactured idea of perfection.
She is fascinated with both medical science and bio technology and how the subject can be used to explore the fears and concerns of modern society, such as appearance, ageing and disease. Much like an artist in past might look to religion or myths as a known narrative to present ideas, Piccinini uses science as the underlying mode by which we explain our contemporary world, and of a human desire for a better future for each generation going forward.

The characters in Piccinini’s stories are alien creatures, mutated animal/human hybrids and startlingly lifelike – they simultaneously attract and unsettle the viewer. Her anthropomorphised machines – motorbikes as lovers, staring lovingly at one another – reference both a universal instinct to apply human emotions to all animals and things, as well as an implied genealogy that humans and technology are increasingly intertwined. Her work ultimately questions the way that contemporary technology and culture changes an understanding of what it means to be human and the relationships with, and responsibilities towards, the things mankind creates in the name of progress.

About the Artist
Patricia Piccinini was born in Sierra Leone and currently lives and works in Australia. Solo museum survey exhibitions include Hold Me Close To Your Heart at Arter Space For Art, Istanbul, Once Upon a Time at Art Gallery of South Australia, Adelaide, Relativity at Art Gallery of Western Australia, Perth, (tender) Creatures at Artium, Vitoria-Gasteiz (Spain), Hug: Recent Works by Patricia Piccinini at the Frye Museum, Seattle, and Des Moines Art Centre, Des Moines (USA), Call of the Wild at MCA, Sydney and Retrospectology at ACCA, Melbourne. In 2003 her exhibition We Are Family represented Australia at the 50th Venice Biennale before touring to the Hara Museum, Tokyo (Japan) and the Bendigo Art Gallery, Bendigo (AUS). Patricia was also represented in the 2nd Asian Art Biennale (Taipei 2009), Bienal de La Habana (Cuba 2003), Sydney Biennale (Australia 2002), Liverpool Biennale (UK 2002), Berlin Biennale (Germany 2001) and Gwangju Biennale (Korea 2000).