The last week in November is Russian Art Week, with London hosting auctions, events, plays and art shows as set out at www.russianartweek.co.uk. A double exhibition at the Saatchi Gallery is the highlight. 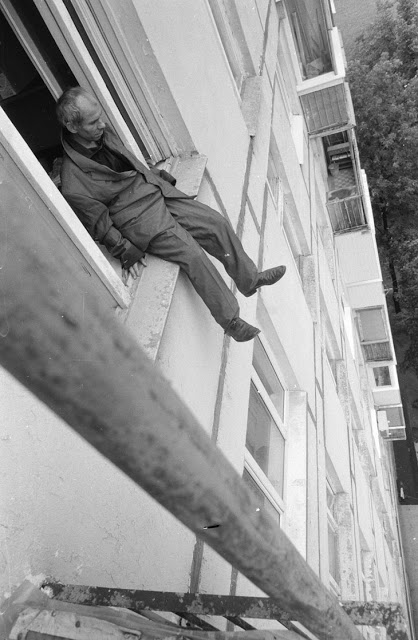 Since Charles Saatchi moved into his Chelsea premises, I’ve found his method-oriented presentations (‘Out of Focus: Photography’, ‘The Shape of Things to Come: New Sculpture’ etc) more persuasive than his nationally-themed collections (‘Korean Eye’, ‘The Revolution Continues: New Art From China’ etc). This presentation of Russian art bucks that trend, partly because it’s actually two shows which play off each other fruitfully. The first two floors constitute the contemporary Saatchi-owned and curated exhibition ‘Gaiety is the most outstanding feature of the Soviet Union: Art from Russia’. However, as that chillingly unrealistic Stalin quote indicates, much of the 18 artists’ work still has one foot in the past. That makes for a good fit with the third floor, where the Tsukanov Family Foundation presents work not owned by Saatchi in ‘Breaking the Ice: Moscow Art 1960s-80s’. This provides an extensive sample (22 artists, 200 works) of underground art from the Soviet era. 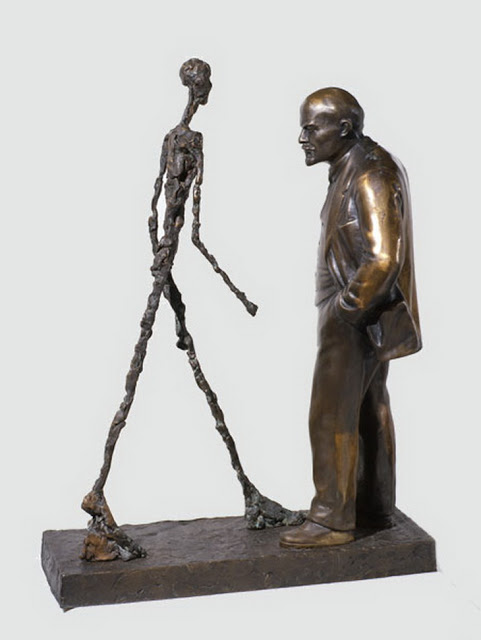 The two shows often converse, and two themes emerge. First, the violence and oppression in Soviet society, how the outsider faces the system and the weak face the strong, how it is remembered, how it still has its effect in the politics of Russia now. Second, the dialogue between the modernism of the early 20th century and the stilled Russian art world of the Soviet era, and on to the present through an open engagement with all forms of western art. Leonid Sokov’s encounter between Lenin and Giacometti rather neatly elides those two concerns. 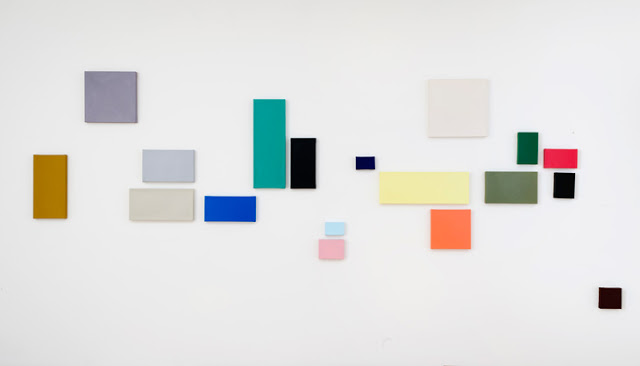 Ludmila Konstantinova: Paintings for Holes, 2011
Upstairs, to illustrate the conversation, Alexander Kosolapov and Yuri Zlotnikov riff on Malevich, as do Yelena Popova’s pastelised and wittily-hung abstracts and Ludmila Konstantinova’s grouped monochromes downstairs. The latter also tune in to the spirit of unprovable subversion which animates Sot art: they are said to be designed to cover over the cracks in sub-standard housing – itself an entertainingly ironic project when transported to Saatchi’s pristine walls. 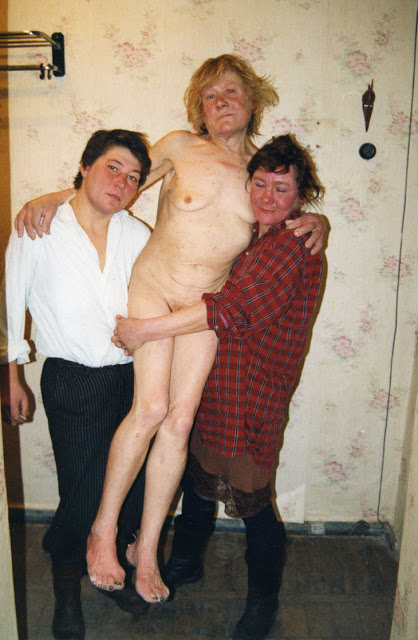 Boris Mikhailov: from ‘Case History’, 1997-8
Or again, Boris Mikhailov’s unflinchingly documentation of the social legacy of communism and its break-down plays well against the necessarily more elliptical critiques of Bulatov, Sokov and Pivarov. We get a third of the 413 images from late nineties Ukraine which make up ‘Case History’, in which the desperation shown by their willingness to take money from Mikhailov in order to pose as they do becomes part of the work. Many of them are blown up big enough to make the characters life-size as they show us their acne’d arses, cankered cocks and air of accepting despair. And not only does Mikhailov occupy two rooms out of the ten, his interest in outcasts is echoed in the full room given over to Sergei Vasilev’s portraits of tattooed prisoners from Soviet gaols and in ‘Criminal Government’, Gosha Ostretsov’s disturbing installation of torture cells. 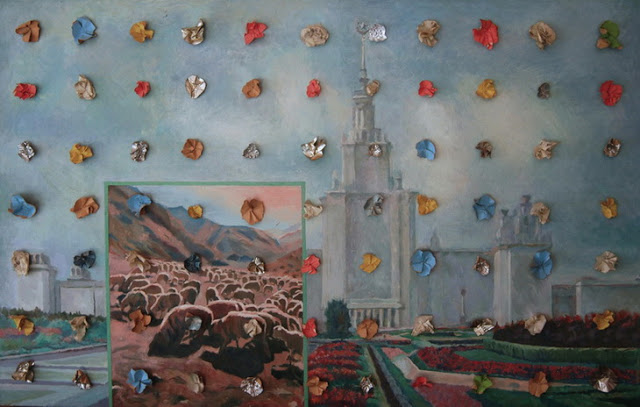 Ilya Kabakov: Holiday 2, 2001
.
Ilya Kabakov’s is the most impactful work in the 60-80’s sector, and he and Mikhailov are, overall, the dominant presences. His rooms include the ‘Holiday Series’, which imposes candy-coloured flower-like ribbons of foil onto murky old paintings, making for what Kabakov terms the ‘pseudo-renewal’ of ‘cosmetic repairs’ – in society or in hotels – and a means of imposing an ‘empty centre’ onto an ideology via surface distractions. There’s also a narrative installation telling the story and showing the results of an artist who attacks his own show with an axe: this, poised between idealism and self-censorship, catches the agenda for much of the older work. 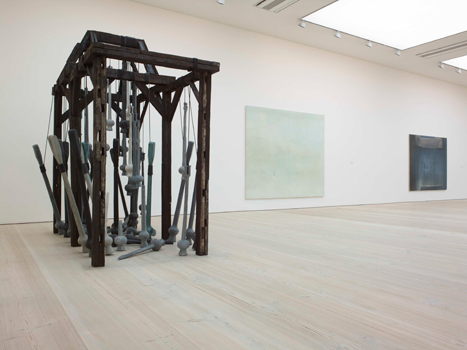 The installation is generally good. ‘Breaking the Ice’ re-engineers the space far more than is typical in Saatchi’s show (which tend to fit the works to the impressive space rather than the other way around) – and that makes for another successful contrast in this pairing. Not all of the 22 ‘ice breakers’ are much-known in the west, and I find that in some cases – Oleg Tselkov, Kolmar & Malamid and Grisha Brushkin, for example – political import comes at the cost of aesthetic nullness. But Mikhail Roginsky’s majestically simple pop appropriations and Vladimir Veisberg’s dreamlike soft focus geometries, for all that they feel stranded in time, deserve to be more widely seen. 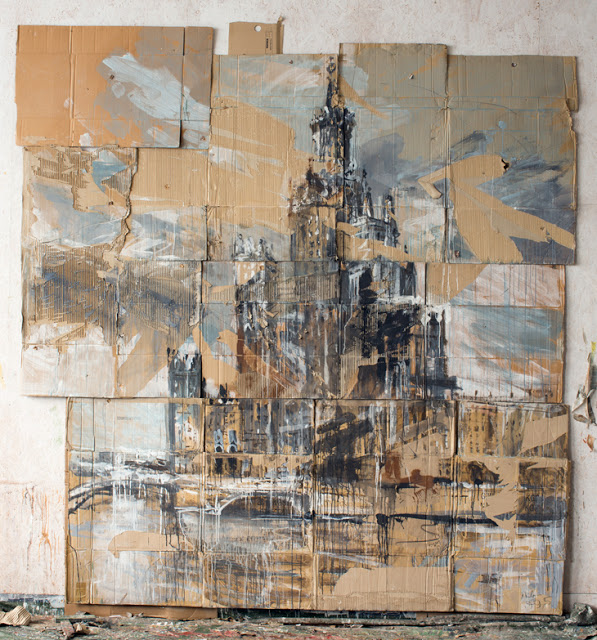 Of course the contemporary work also needs to stand on its own terms, and much of it succeeds. That’s partly down to the separate rooms given to Mihailov, Ostretsov and Valery Koshlyakov‘s monumental paintings of grand buildings made symbolically rickety by being painted across scraps of cardboard; partly down to the photographic human power of Vikenti Nelin’s characters living life on the edge and staring into the abyss by means of their vertiginous placement on the ledges of Soviet tower blocks; and partly to felicitous combinations. Nelin’s photos are ranged around Daniel Bragin’s sculpture of a smashed windscreen sewn back together, as if something had fallen; Nika Neelova’s carnivalesque gallows work wonderfully either end of appropriately dark paintings; Anna Parkina’s post-constructivism completes the collage aesthetic of the room with Popova and Konstantinova. There are a couple of rooms which didn’t work for me, but the hit rate is high. 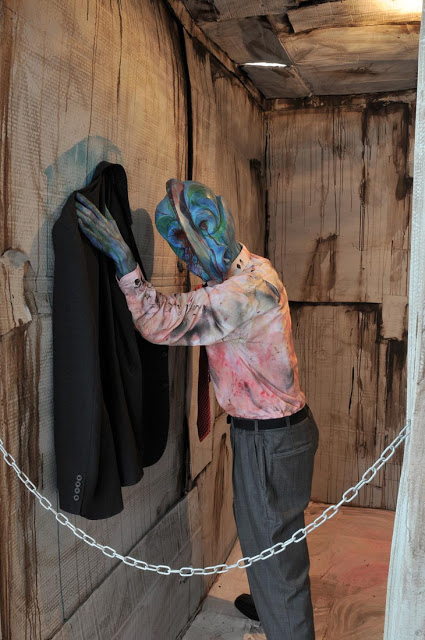 A successful exhibition, then, and effectively paired. So what does it tell us about the current trends in Russian art? More focus on the personal effects of change than on its public manifestations, and as much dialogue with and via the past as more directly with the new realities of Putin and capitalism? A prevalence of photography, but not film, performance or multimedia work? 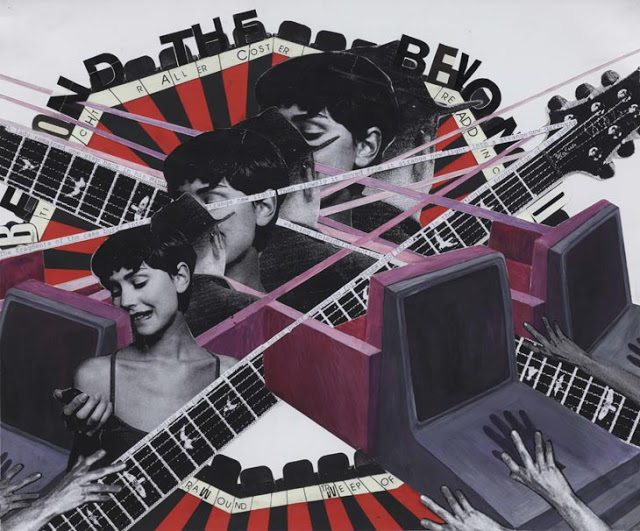 Hardly: whilst some omissions – say Oleg Tistol or Dubossarsky & Vinogradov – would have fitted right in, others – Blue Noses, Andrei Molodkin, Victor Alimpiev, Oleg Kulik or Pussy Riot for example – would have altered the tenor of the show. That Saatchi can find his kind of art in pretty much any region may speak of some homogenising tendencies in world art, but probably says more about Saatchi’s taste. Is that a problem, as commentators often suggest? Not as such, as it’s his collection with no entrance charge and there is plenty of interesting work which does fits in. It’s only an issue if the show is framed as more representative than it is. Here the press release claims that the exhibitions ‘will play a key role in shaping our understanding of recent Russian history as well as contemporary Russian art’ – and I wouldn’t argue with that.