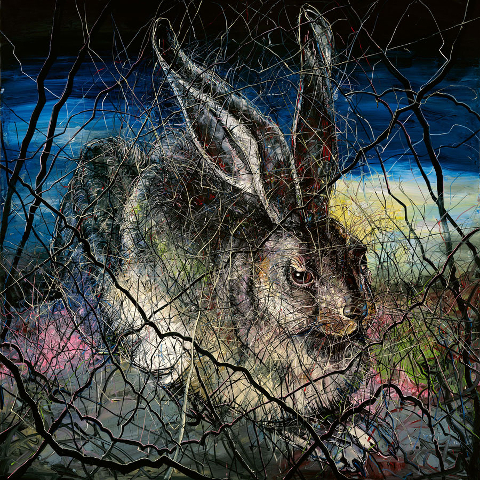 They are not real landscapes. They are rather about an experience of miao wu [marvellous revelation]. Miao wu constitutes a restless journey of discovery.
—Zeng Fanzhi

Zeng’s aesthetic restlessness epitomizes the evolution of Chinese contemporary art in the post-1989 era, grappling with local history and tradition in the face of external influence and accelerated change. Since the beginning of his career, he has presented a succession of powerfully introspective subjects, from the haunting Hospital paintings to the visceral Meat paintings that juxtapose human subjects with butchered flesh; from the enigmatic Mask paintings to candid and startling close-up portraits; from intimate, existential still-lifes to depictions of pivotal Western cultural figures such as Francis Bacon, whose psychic portraits altered the status of the human figure in twentieth century art. Charged with an underlying psychological tension, Zeng’s oeuvre reveals the place of the unconscious and the aberrant in the construction of human experiencFor the past decade, landscape has been a central focus of Zeng’s art. In highly tactile scenes, the details of representation often overlap seamlessly with qualities of abstraction, as in certain traditional Chinese aesthetic objects. All are expressionistically rendered with extraordinary attention to the material nuances of the painted surface. In densely worked paintings, such as Pure Land (2012) and Untitled (2012), gnarled branches crisscross over dark terrain, accented with swaths of white, teal, violet and rose. Zeng’s fictitious place is at once luminous and bleak, where unearthly bursts of vivid color are trapped in snaking brambles that obstruct yet hold the gaze. Filled with brushwork that is both refined and heavily textured, the thick surfaces underscore the physicality of Zeng’s painting process. Against these haunting landscapes, the bare yet resilient trees that survive in such harsh conditions hold the promise of renewal and rebirth.

Several works in the exhibition are inspired by the sketches of Albrecht Dürer. In a reversal of conventional East-West aesthetics, Zeng re-interprets Dürer’s intricate imagery and thin, precise brushstrokes—which resonate with traditional Chinese painting—with thick strokes of oil paint layered with a broad brush. In The Hare (2012) and Head of an Old Man (2012), the rabbit fur of the former and the flowing white beard of the latter are rendered as masses of carefully delineated, yet aggressively and broadly executed brushstrokes. In his interpretation of Dürer’s drawing Praying Hands (1508)—an iconic image that has been endlessly disseminated and reproduced—Zeng moves beyond the overt symbolism of hands clasped in prayer, intent on rendering the nuances of aging flesh in highly textured impasto.