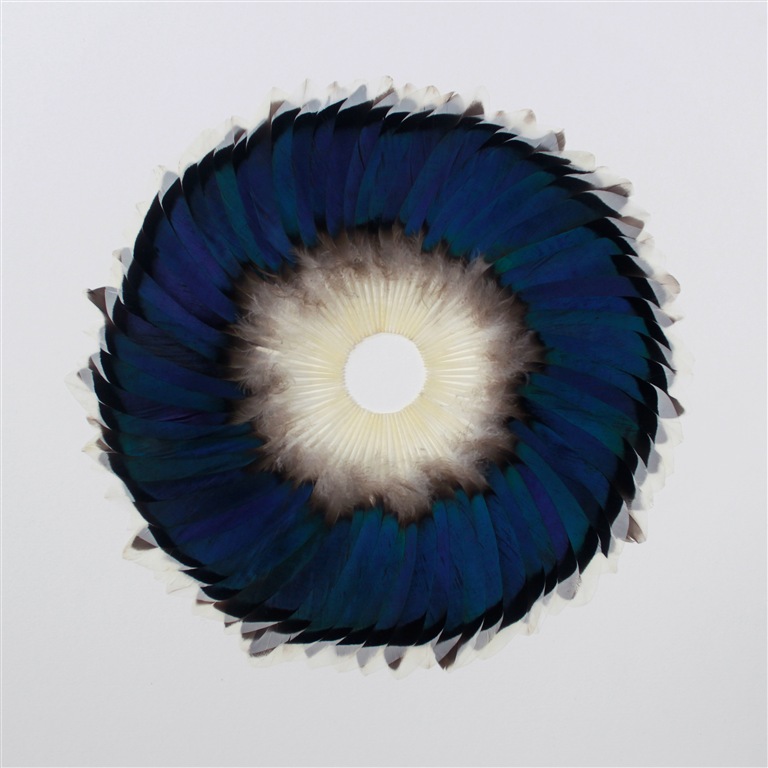 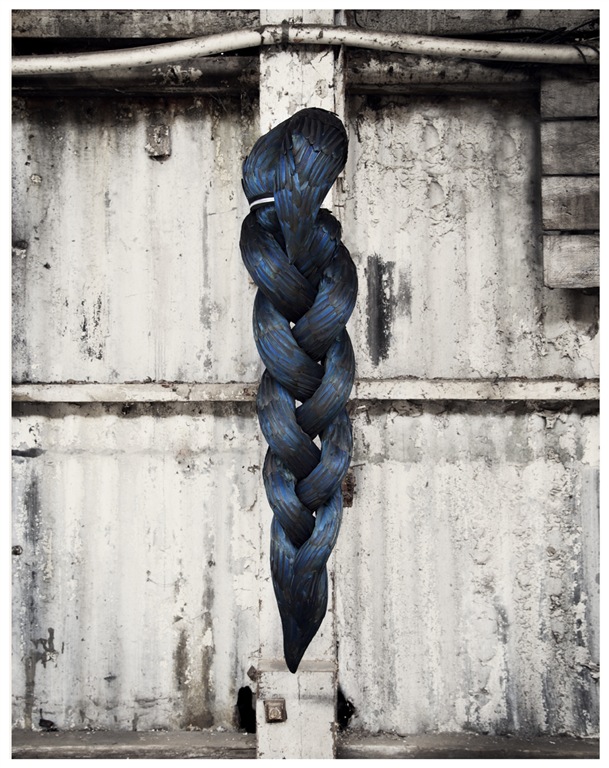 All Visual Arts are to present a major solo exhibition from sculptor Kate MccGwire. The title Lure is a dual reference to the ring of feathers used by a falconer to call and command their birds, and to the siren-like call of the work itself. It evokes the combination of our fascination with the iridescent, exotic specimens on display and the desire to look closer in spite of the disquieting atmosphere they create. MccGwire’s work uses the language of nature’s forms to construct impossible creatures, pitting the beauty of a bird in flight against our instinctive revulsion to these unnatural forms in close proximity. Their feathers are both alluring and abject, and appeal to our subjective experience as we confront the breathless, convoluted structures. Her sculptures exist in the periphery between the living and the dead, challenging our perceptions of the authentic and the imaginary.

MccGwire’s working process is a continuous cycle of collection and construction that manifests in the objects she creates. We take pleasure in the painstaking process of their development, apparent in the layers of carefully aligned feathers and in each swirl of oilslick plumage. This creative process is central to MccGwire’s work, allowing the organic materials to suggest their own form and following their patterns to evoke movement and musculature in the sculptures themselves. Taking natural materials and reimagining their forms, MccGwire’s works take on an anthropomorphic quality; a brooding, predatory physicality that at once attracts and repels the viewer.

The exhibition takes the form of a wunderkammer of uncanny specimens and images; coiled, bound and cased in antique glass cabinets. In particular, the voluptuous Orchis manipulates this familiar museum display to enhance the sense of its exoticism and lifelike form. Beneath a glass dome, it hangs limp between the teeth of a scientific clamp, appearing to have been temporarily coerced into submission. The case gives the work the impression of authenticity and familiarity as a specimen of some unstudied creature, isolated within the familiar framework of natural history. Similarly, Cleave, a work in white pigeon feathers has been constrained within a glass cabinet. Challenging our impulse to perceive pigeons as diseased and parasitic creatures, Cleave explores the purity and sensuality of form to attract our gaze. Delving into and out of itself over and again, we fall prey to its allure and undulating physicality. MccGwire’s preoccupation with natural fibres and their creative potential, in particular with hair, is enacted in Splice. The intricately plaited magpie feathers reference MccGwire’s enduring interest in the mythological significance of hair. Placed in this context the meaning twists from girlish plait to something knotted, visceral, anguished and dark.

Dominating the space is the monumental presence of Gyre, a large installation piece bringing together MccGwire’s enduring themes through its gestural obsidian form. Formed from a vast collection of crow feathers, the piece refers to the cultural mythologies of crows as devious creatures, omens of bad luck when seen in pairs and closely associated with death due to their unbidden presence on battlefields and graveyards. These unconscious associations are inscribed in the silken black surface of the structure, and intensify as Gyre’s sheer scale causes it to exceed the boundaries of the cabinet, viscerally invading the formal space of the gallery. The piece appears organic, almost umbilical as its tendrils entwine with one another, wrapped closely to the structure evoking the primal dependence of both mother and child, and the parasite.

MccGwire’s avian structures appear rooted in the aesthetic of natural history, taking on its associations of intellectual dominance, decadence and display. The pieces adopt the qualities of their material – appropriating the abject signification of bird feathers to create hybrids. Lifeless wings seem poised to take flight yet remain tethered, their momentum restrained, giving the sculptures a seething, serpentine quality. The culture of display is also key to the works, exploiting the perverse attraction to possess the abject and unfamiliar creature, and to frame it within a culture driven by aesthetic hierarchy. As MccGwire describes her pieces, they represent something ‘both sensual and deviant in equal measure’.

Lure’s seductive yet unsettling collection of hybrid forms and expansive sculpture causes us to look more closely and to examine our relationship to such quotidian materials. Though they appear disturbing and unfamiliar at first glance, there is something strangely recognisable about their form – their creases and crevices seem somehow bodily, allowing us to identify some small part of ourselves in the sculptures. This unexpected familiarity is at the heart of the work, allowing us to recognise the parasitic, wounded and traumatic dimensions of works such as Stigma and Host in which feathers cling to surfaces or appear to tear lesions in the surface of the lead. MccGwire’s work recontextualises natural materials, creating an impossible menagerie of writhing forms that expose both the beauty and darkness of nature, and reflect our own fears and vulnerability in their swelling shadows.

Kate MccGwire’s practice probes the beauty inherent in duality, exploring the play of opposites – at an aesthetic, intellectual and visceral level – that characterises the way we conceive the world. She does this by appealing to our essential duality as human beings, to our senses and our reason, and by drawing on materials capable of embodying a dichotomous way of seeing, feeling and thinking. The finished work has a consistent ‘otherness’ to it that places it beyond our experience of the world, poised on a threshold between the parameters that define everyday reality. MccGwire lives and works in London, her studio is on a Dutch barge on the River Thames.