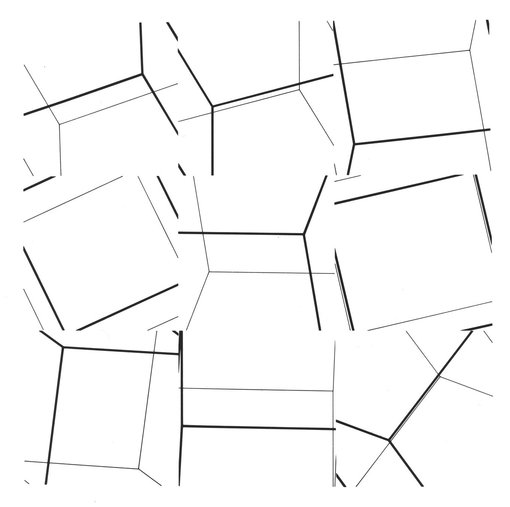 All my relations to aesthetical decisions always go back to musical thinking, either active in that I played a musical instrument or theoretical in that I see my art as visual music… I was very impressed by Anton Webern’s music from the 1920s where for the first time I realized that space, the pause, became as important to the musical construct as the sound itself. So there are these two poles, one and zero.

one and zero, Manfred Mohr’s first solo exhibition in London, presents a concise survey of his fifty-year practice. Harnessing the automatic processes of the computer, Mohr’s work brings together his deep interest in music and mathematics to create works that are rigorously minimal but with an elegant lyricism that belie their formal underpinnings. Through drawing, painting, wall-reliefs and screen-based works, the show examines the artist’s practice through the prism of music and the idea that what is left out is as important as what remains.

Beginning in 1969, Mohr was one of the first visual artists to explore the use of algorithms and computer programs to make independent abstract artworks. His early computer plotter drawings – when he had access to one of the earliest computer driven plotter drawing machines at the Meteorology Institute in Paris – are delicate, spare monochrome works on paper derived from algorithms devised by the artist and executed by the computer. P198aa (1977-79) is an elegant rhythmic composition of nine randomly rotated and cut cubes that hints at multi-dimensional space.

In other works that pre-date Mohr’s pioneering work with the computer, his interest in systematic art-making can clearly be seen; Bild 24/768 (1968) is reminiscent of a simple circuit board with its curious symbols and hard-edged patterning.

one and zero explores how the complexity of the cube in 3, 4, 5, 6 and 11 dimensions, as well as the possibilities of going to even higher dimensions, have influenced Mohr’s practice over the course of forty years. Originally a jazz musician, he compares the cube to a musical instrument and the detailed improvisation that the instrument allows within fixed tonal parameters. His large-scale wall relief – P-499A (1993) – is composed of fifteen unique laser cut steel pieces evolved from Mohr’s investigation into the 6-dimensional hyper-cube.

In 1999, Mohr returned to the use of colour to emphasize and distinguish between subtleties in spatial relationships. P709b1-5 (2002), a large-scale digital painting on canvas shows five views of the 6-D rotation of a hyper-cube revealing an intriguing orchestration of solid greens, blues, purples and pink. More recently, digital technologies have enabled the artist to create works such as P1411-A (2010), in which a generative algorithm based on an 11-dimensional hyper-cube manifests an evolving progression of colour and shape as a screen based real-time computer animation.

The exhibition is accompanied by a new publication with a specially commissioned essay by Alistair Rider, Lecturer in Modern Art, University of St. Andrews, Scotland

Manfred Mohr and Alistair Rider are in conversation on Tuesday 20 November at 7:30 pm at Carroll/Fletcher. Free but booking essential on carrollfletcher.eventbrite.com