Seduced By Art: can photography and fine art hang together? - FAD Magazine
Skip to content 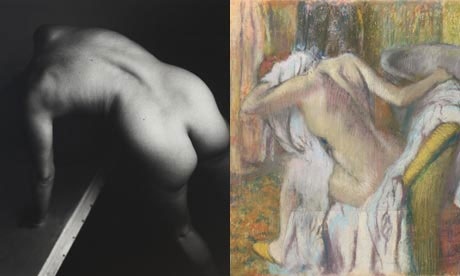 Grimly ponderous … Untitled by Craig Horsfield and After the Bath (Woman Drying Herself) by Degas. Photograph: National Gallery, London/Craig Horsfield

This article titled “Seduced By Art: can photography and fine art hang together?” was written by Jonathan Jones, for The Guardian on Tuesday 30th October 2012 17.41 UTC

A photograph of the British countryside has been placed among the oil paintings in the National Gallery – causing people idling past to do double-takes. You can see them wondering: “Is that a painting? It’s so smooth, so shiny, so flat.” The picture shows bright fields and skies, seen through a dark thicket: the sensation of looking out from a hidden nook makes it an introspective, hesitant work. Perhaps that’s why it hangs so well alongside a great landscape painting by the quiet and contemplative master of the genre, John Constable.

Richard Billingham’s shot has invaded the holy sanctum of high art that is the National’s permanent collection as part of Seduced By Art, an exhibition of past and present photography. The gallery is a temple to oil on canvas. What happens when you allow photographs among the daubs?

Billingham strikes up a sombre, sensitive conversation with Constable’s The Cornfield: the result is a comparison of the English countryside in the early 1800s and early 2000s, proving, as the show claims, that photography can have a meaningful relationship with great painting. That’s just as well, because the two other pairings in the main galleries are disastrous. Seeing Richard Learoyd’s photograph Jasmijn in Mary Quant next to Ingres’s 19th-century beauty Madame Moitessier does nothing for either. As for a Craigie Horsfield photographic nude, shown between two sensual paintings by Degas, it’s an elephant among elegance.

Yet Degas, as it happens, was fascinated by photography. The great 19th-century painter of modern life took photographs and brooded on the relationship between the brush and the camera. Elsewhere in the National hangs his portrait of Princess Pauline de Metternich. Based on a photograph, the work gives the princess the slightly cadaverous look of some Victorian snaps, almost as if he’d copied a 19th-century deathbed photo. It’s a shame the show did not place some of Degas’s own photographs among his paintings, instead of Horsfield’s grimly ponderous black-and-white nude; this life-size work was surely inspired by After the Bath, Woman Drying Herself, the Degas work it partners (and thus, in turn, inspired by Degas’s own source, a drawing by Michelangelo). But arty quotation does not make art more powerful.

Is photography art? Clearly, some photography is, along with millions of camera-made images – from passport pictures to surveillance stills to my own snapshots – that are not. The trouble with Seduced By Art is that it has selected photographs that clearly aspire to be Art with a capital A. But why not put a passport photograph next to Giovanni Bellini’s Renaissance portrait of Doge Lorenzo Loredan? It is, after all, an exact depiction of someone’s facial features. Or what about a holiday snap next to something by the great 17th-century landscapist Claude Lorrain? That might say more, suggest more, matter more.

Somehow, the conversation here is too polite. Yes, photography can be art, but photography that is not art can, paradoxically, be of more artistic interest – as Marcel Duchamp and Andy Warhol understood when they used police mugshots or photo-booth portraits in their work. Seduced By Art misses that risk, that danger. It celebrates the more civilised side of photography, and the result is a cultural cringe before fine art.

Seduced By Art also features a detailed survey, in the Sainsbury wing basement, comparing 19th-century photographs that quote and emulate oil paintings with modern photographs that do pretty much the same, only more knowingly. The brilliant Victorian photographer Roger Fenton photographed Crimean battlefields with a chilling rawness that had little to do with high art: he showed cannonballs littering the ground in the aftermath of the charge of the Light Brigade. His pictures are among the very first war photographs and contrast eerily with the glorious face of war evident in a 19th-century painting of a Napoleonic battle by Horace Vernet. But when Fenton wanted to be taken seriously as an artist, he set up and photographed a richly symbolic still life with black grapes, white funereal lilies and a statuette. It is a grand curiosity and yet, somehow, vulgar and kitsch: it caricatures the still life tradition just as simplistically as, in the same room, Sam Taylor-Wood’s speeded-up video of a still life decaying before your eyes.

These two still lifes, made more than a century apart, clearly regard such paintings as symbols of mortality – and ape or heighten that aspect photographically. But still life painting is not that simple. It is not always about death. It might be about sex. Or it might be about … apples. That is why the best work in the still life section is the least self-conscious, the least arty. Nan Goldin‘s photographs are rough slices of life. Her picture of her hotel bed in Paris has a diary-like immediacy. The grapes and oranges in paper bags lying on the bed are not immediately readable as symbols of any kind – they just vaguely suggest desire, life, love, and add to a feeling of sensual romance. They do not proclaim any artistic significance beyond being part of Goldin’s day. We believe they are her food, bought to be eaten, not photographed. Goldin’s still life matters precisely because it is not trying to be art.

As this exhibition shows, right from the start of photography, its practitioners have responded to high art’s call. Julia Margaret Cameron posed a woman and child as the Madonna and Jesus she saw in a Renaissance painting. Gustave le Gray shot and manipulated seascapes to emulate works by Turner. And today, Ori Gersht takes photographs of exploding still-life arrangements in order to recapture, he says, the deep, rich sense of time that a painting possesses.

It is all very interesting, but it feels like a conversation between people speaking different languages. Photography and painting are profoundly different. One is made by hand, the other by a machine. Painting is an transfiguration of reality by the painter’s imagination, a photograph is a deposit of light on to paper or digital memory.

The reason Billingham and Constable get on is because they both love nature: that shared passion for the beauty of the landscape connects them across time and media. But the most brilliant photograph in the basement galleries is also the one that troubles me most about this whole project. Luc Delahaye’s epic picture of a battlefield in Afghanistan is compelling and unsettling. Smoke hangs in the bleak sky, the only visible impact of a massive US bombardment of Taliban positions. Mountains freeze like Martian peaks in the distance. The fields are flat and empty. The smoke tells of hidden carnage.

Above this hangs Vernet’s history painting and it is easy to see how Delahaye has created a modern equivalent of traditional battle pictures. But above all, his photograph reminds me of Velázquez’s great painting The Surrender of Breda, with its elegant diplomatic meeting in the foreground contrasting with burning villages in the distance. So here I am, comparing Delahaye’s photograph with a painting – seeing it as art, when it is actually a factual record of uncounted deaths. Clearly, I have been seduced by art.