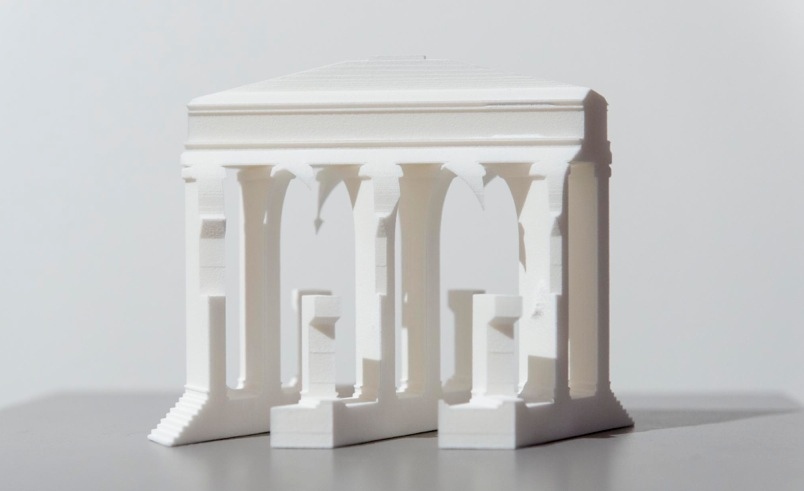 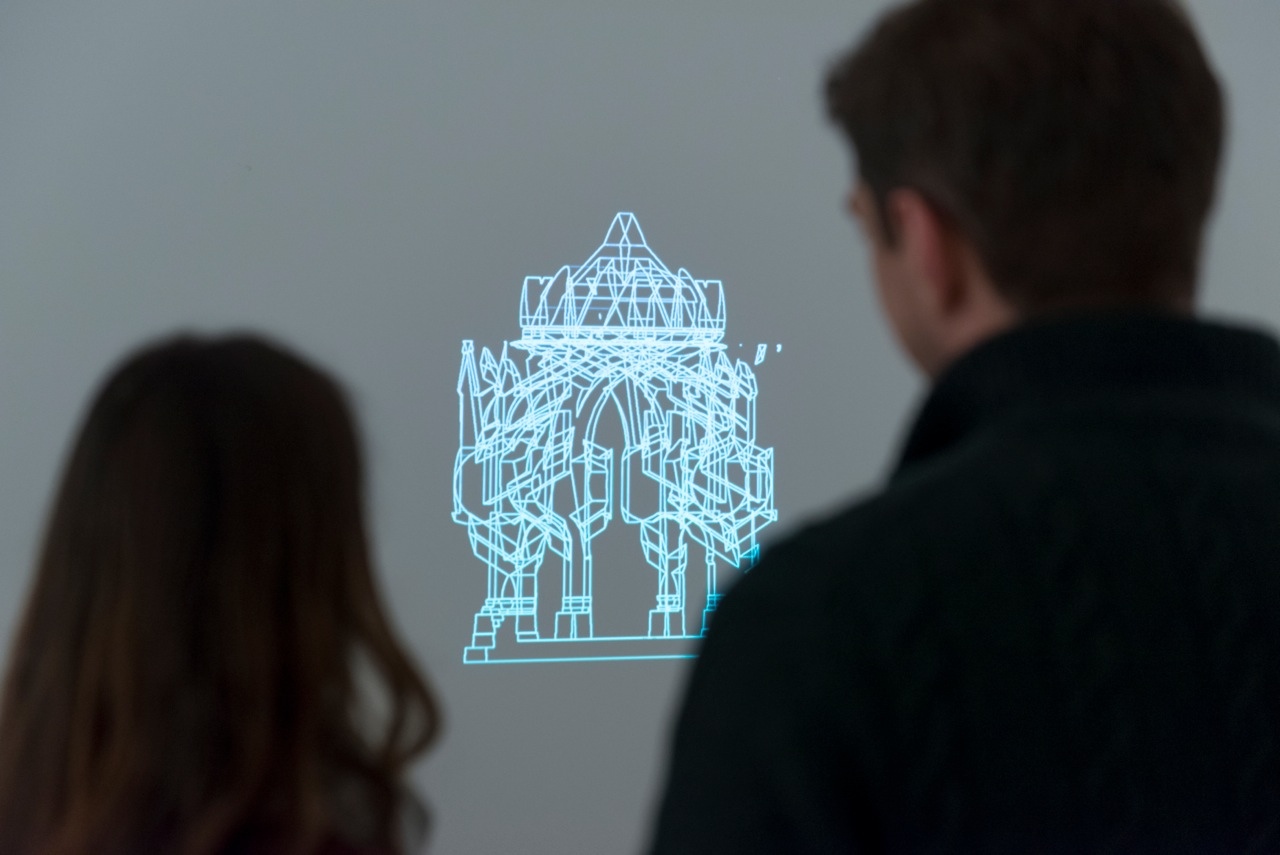 On until 10th of November
Go see this group exhibition ‘Geometry’, featuring works by Chris Agnew, Rachel Garrard and Nick Hornby. Running from 12th October to 10th November, the show seeks to examine different concepts of geometry in Contemporary artistic practice. By juxtaposing the different oeuvres of these three artists, from etchings to three-dimensional renderings, Geometry creates a syzygy of sorts, shedding light on the complexities of line, form, and the intersection and diversion of different planes and nodes.

Presenting two inter-related projects, Celestial Sphere and Precession, Rachel Garrard has been inspired by the geometric patterns and movements of stars and planets. “The Celestial Sphere is an imaginary dome used by astronomers to describe the position of the stars as seen from the earth,” she explains. Inspired by a residency in the Atacama desert in Chile, the silverpoint drawings of Celestial Sphere are the result of a meditation on the way in which celestial bodies interact. “I began to envision each star as a centre of energy, connecting throughout the cosmos through web-like grids, or as synapses of a great brain.” Meanwhile, Precession is an ongoing project that has included holographic projections. Here, it finds its latest incarnation in a series of etchings which study the movement of the night sky. Using acid engraved steel plates, the pigment comes from ground up shells which Garrard calls ‘Star Dust’, as named by the Kogi tribe of the Sierra Nevada, Columbia, from whom the inspiration for the project was taken. This soft, shimmery material gives each work a luminous quality and spiritual link to celestial realms. 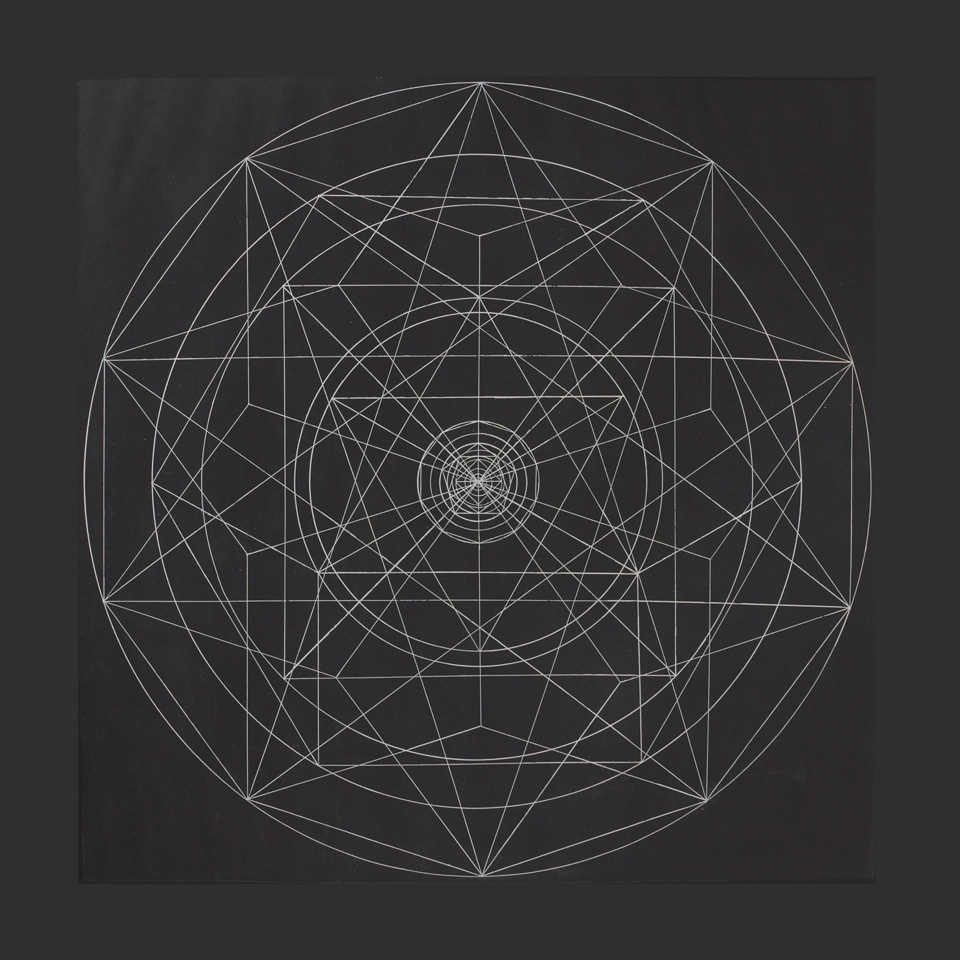 Chris Agnew has also chosen to work in etchings, using oil paint on icon panel to create a new series of works especially for the exhibition, building on the works he exhibited in his first solo show earlier in the year. Where previous work depicted landscapes and objects that had links to religions and belief systems, for Geometry ? Agnew has re- examined his own practice, stripping back to reveal “[the works’] simple aesthetic roots, with the intention of allowing the pieces to speak a language of universals rather than of specifics.” With a new focus on the core concerns of his practice, works such as The Ark, Ahora Gorge – which features a mountain where the remains of Noah’s Ark are said to be found – find new life in an exploration of textures and colours instead, creating visually arresting reworkings that no longer rely on their initial context.
Presenting models of unrealised sculptural proposals designed during his time at a residency at Eyebeam in New York City, Nick Hornby will also present a video of the same project. These deconstructed architectural models pick and take apart existing structures to break them down into their most basic components before building them back up again into new and original forms. The resultant object is as much sci-fi as it is a postmodern ruin. Hornby’s 360 degree renderings provide a tantalising glimpse of the original iconic form before rotating into new territories, like asteroids floating in space coming together again to reveal a new face, only to dissolve again.
By reinterpreting, deconstructing and constructing, Hornby puts materials and shapes in opposition to each other in both clash and harmony.

It is through these varied yet complimentary practices that Geometry will present audiences with a new exploration of stellar planes, shapes, lines and dimensions. Whether two or three-dimensional, what draws these works together is the dialogue created between them, questioning notions of shape, context and perception.

Chris Agnew
Chris Agnew was born in 1987. He received his BA in Contemporary Art Practice from The University of Leeds in 2008, followed by a Masters in Fine Art at the Wimbledon College of Art in 2010. His work has been short-listed for the Jerwood Drawing Prize in 2009 and 2010 consecutively, The Clifford Chance Post- Graduate Printmaking Prize in 2010 and Saatchi’s New Sensations in the same year. He is also a recipient of the Jealous Graduate Print Prize (2010). His work has been exhibited in Japan, Italy and throughout the UK – including the Royal Academy of Arts’ Summer Exhibition. He currently divides his time between his studio in Bucharest and London. For more information, visit www.chrisagnew.co.uk

Rachel Garrard
Born in 1984 and dividing her time between New York and London, Rachel Garrard received a BA Honors in Fashion Design from the Central Saint Martins College of Arts and Design, where she also studied metal work. Two years later, she received her Postgraduate Diploma in Fine Art from the Byamshaw School of Art under a full scholarship, followed by workshops in the art of soldering at NYC Resistors the same year. Having exhibited in New York, St Petersburg and London, she is the recipient of the Performance Art Award at the first-ever holographic projection art awards hosted by Musion in 2009. For more information, visit www.rachelgarrardprojects.com

Nick Hornby
Nick Hornby is a British artist living and working in London. He graduated from the Slade School of Fine Art in 2003 and completed his postgraduate degree at Chelsea College of Art in 2008. He has since exhibited in the UK, the US, Switzerland, Greece, and India, with shows at Tate Britain, Southbank Centre, Fitzwilliam Museum (UK), and The Hub (Athens), among others. Prizes include the Clifford Chance Sculpture Prize, the Deidre Hubbard Sculpture Award, and he was shortlisted for the inaugural Spitalfields Sculpture prize and Mark Tanner Sculpture Prize. He has completed residencies at Eyebeam (New York), with the ICIA (Mumbai), with the Fleischmann Foundation (Slovakia). Future projects and commissions include the Polish Biennale 2012, and a collaboration with Sinta Tantra at One Canada Square, Canary Wharf 2013. For more information, visit www.nickhornby.com