Art: the blood sport for the ultra-wealthy? - FAD Magazine
Skip to content 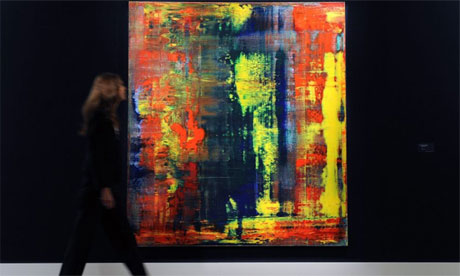 This article titled “Art: the blood sport for the ultra-wealthy?” was written by Jonathan Jones, for theguardian.com on Thursday 18th October 2012 13.40 UTC

It was the biggest heist in American history.

That’s what they call the carefully planned robbery at the heart of Martin Scorsese’s gangster film Goodfellas. But as soon as the raid hits the headlines, the participants start to be bumped off by their boss who doesn’t want to share his loot with anyone. In the film’s greatest sequence, their bodies turn up in abandoned cars, on hooks in meat freezers and falling out of garbage trucks to the impassioned strains of Eric Clapton’s Layla.

Now Clapton himself has pulled off one of the greatest heists in art world history. I know, I am getting my stories confused. This week’s news headlines have been grabbed by the theft of seven modern masterpieces from a public gallery in Rotterdam. Obviously I am not suggesting the veteran rock guitarist was somehow involved in this spectacular robbery.

But what is moral and what is immoral in the world of art? Prices have reached such extravagant heights that perfectly legal art sales in respectable auction houses have the piratical derring-do of some legendary crime. The climax of the Frieze art fair week for Sotheby’s in London was the sale of a Gerhard Richter painting from Eric Clapton’s collection for £21.3m – a new world record for a work by a living artist.

To get an idea of that price, the Fitzwilliam Museum in Cambridge is currently trying to find £3.9m to buy a painting by Poussin, one of the most revered artists in the European canon. It is thought that on the open market it would fetch £14m. Clapton’s Richter is worth twice as much as a Poussin – apparently.

My head just spins among these mad figures. The art heist in Rotterdam is unlikely to make much money for anyone, as you can’t actually sell stolen works by artists like Monet and Picasso without being caught. No, the way to make a killing is legally, in a market that gets stronger as the rest of the economy gets weaker. Art has become a blood sport for the ultra-wealthy, with everyone else as spectators.

Is Richter’s Abstraktes Bild “worth” the money? When prices soar to such absurd levels, you can no longer say that anything is worth anything. It’s about what auction houses can get people to pay.

Hilary Mantel got £50,000 for winning the Booker prize this week. She seemed very happy with that, as most people would be. Visual art has become qualitatively and quantitatively different from other cultural spheres: it is turning into a philistine game that has nothing to do with the serious creative endeavour epitomised by Mantel.

Listening to Layla this morning, I seemed to see Poussins tumbling out of garbage trucks, Richters hanging from meat hooks, and a Titian lying dead in a pink Cadillac.