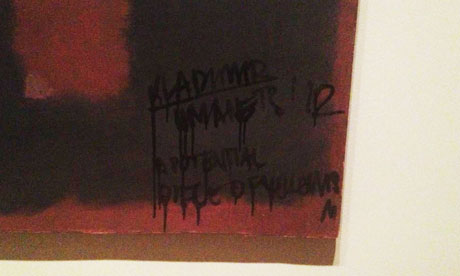 This article titled “Rothko painting defaced at Tate Modern” was written by Ben Quinn, for The Guardian on Sunday 7th October 2012 20.10 UTC

A man has defaced a multimillion-pound Mark Rothko mural hanging in the Tate Modern gallery in front of onlookers. A police investigation is now under way into the vandalism of the US artist’s work.

A visitor to the museum said he raised the alarm after a man inscribed some words in black ink in a corner of Rothko’s 1958 canvas Black on Maroon, before quickly leaving the room.

Tim Wright, who posted a picture on Twitter of the canvas after it was defaced, said that he saw the man sitting quietly in front of the painting beforehand.

“Then we heard the sound of a pen, but by the time we turned around he was pretty much finished with his tag,” said Wright, who was with his girlfriend on a weekend visit to London from Bristol. “The pen ink then just dripped down the painting. Once we realised what had happened, we went to find a member of staff. They were really shocked when they came and saw what he had done.”

The museum said in a statement: “Tate can confirm that at 15.25 this afternoon there was an incident at Tate Modern in which a visitor defaced one of Rothko’s Seagram murals by applying a small area of black paint with a brush to the painting. The police are currently investigating the incident.”

The gallery was closed for a short time after the incident.

The canvas, one of a number by Rothko owned by the Tate, was in a room with several other works painted by the Russian-born artist, who emigrated to the US at the age of 10 and went on to become one of America’s most important postwar artists.

His work commands huge prices. In May, his Orange, Red, Yellow was sold in New York for .9m (£53.8m) – the highest price ever fetched by a piece of contemporary art at auction.

The Seagram murals were painted by Rothko in 1958 for Manhattan’s Four Seasons restaurant, but they were never installed. He presented a number of them to the Tate gallery shortly before he died in 1970. This year, Tate Modern opened a new Rothko Room as part of its rehung permanent galleries.

Art lovers made their feelings known on Twitter, scrutinising the image of the defacement, which appeared to include the word “Vladimir”.

“I am a naturally peaceful person, but I wouldn’t be that upset if ‘Vladimir’ accidentally met with a baseball bat,” said one.

The graffiti on the painting appears to read “a potential piece of yellowism.” According to an online manifesto, Yellowism is an artistic movement run by two people named Vladimir Umanets and Marcin Lodyga.