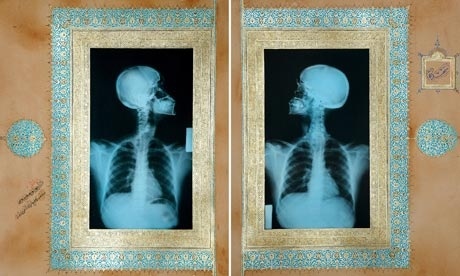 Detail from Ahmed Mater’s Illumination XV & XVI, which uses x-rays to circumvent restrictions on portrayals of the body.

This article titled “Contemporary Saudi artists break down old ‘safety’ barriers” was written by David Batty in Abha, for The Guardian on Thursday 4th October 2012 13.14 UTC

In a country that likes art to be safe and its artists even safer, a surprising tendency: a new generation of edgier artists is pushing Saudi Arabia into the contemporary art world, with works tackling controversial issues such as the glitzy redevelopment of Mecca and the impact of Islam on the Middle East peace process. They are finding an international audience – and fetching record prices.

The new school has not had an easy time of it. In Saudi Arabia, art has traditionally meant ornate calligraphy, or else paintings of horses. Not much else has got a look-in. Young artists have also had to contend with a hostile cultural climate: contemporary art faces a restricted platform in the ultra-conservative kingdom. There are no fine art schools, few galleries and no cinemas.

Yet a determined few are breaking through. At his studio in his villa in the southern city of Abha, Ahmed Mater, 33, who has exhibited at the British Museum and the Venice Biennale, describes how his work incorporates both social critique and respect for religion. His photos and film entitled Artificial Light/Desert of Pharan reflect concern about the ruling al-Saud family’s redevelopment of Mecca, including a multibillion-dollar complex of luxury hotels, malls and apartments. “Many think the only icon should be Ka’ba. They think the towers are a distraction. When you are in Mecca you see all the iPhones click, click, click in the sight of the clock towers. It’s become this capitalist city.”

Mater is at the centre of the Saudi contemporary art boom. He is a co-founder of Edge of Arabia, a collective of conceptual Arab artists set up in his home city in 2003, which has exhibited across Europe and the Middle East, and will tour the US next year. Six pieces by its artists sold for a total of £647,000 at Christie’s in Dubai in April 2011.

The top sale of the auction was by another Edge of Arabia co-founder, Abdulnasser Gharem, whose Message/Messenger sculpture transforms the Dome of the Rock, on the Temple Mount in Jerusalem, into a bird trap. The piece, which shows a rope tied around the Islamic crescent of the shrine’s spire that threatens to bring the Golden Dome down on a dove of peace, fetched £521,449 – a record for an artist from the Gulf states.

In an attempt to capitalise on this growing reputation, Edge of Arabia opens its first gallery this week not in the kingdom but in London, next to the Royal College of Art’s campus in Battersea. The move, which coincides with its latest exhibition, #ComeTogether, in Brick Lane, east London, is also intended to give Saudi artists access to western art education and facilities that they lack back home.

Mater, who studied medicine because it allowed him to do anatomical drawings, was among a lucky handful of self-taught Saudi artists given studio spaces in Abha in the 1990s at al-Meftaha artists’ village, established under the patronage of Prince Khaled al-Faisal, a keen amateur artist and friend of Prince Charles, who once painted watercolours there. Gharem, 39, another former al-Meftaha artist, recalls how back in the 1990s he and his peers had to make great efforts to educate themselves. He would travel to London and rent a flat for a few weeks to read banned art books, or spend nine hours on a dial-up internet connection downloading images of works by Marcel Duchamp, Joseph Beuys and Andy Warhol. “The traditional art was a lot of butterflies and mountains. It had nothing to do with our reality, with all the wars – Iraq, Afghanistan – going on.”

Visiting the surrounding region in the province of Asir, there is evidence of a quirky visual culture and heritage, which perhaps illustrates why it became the birthplace of Saudi conceptual art. The art of tahjir, or mounting a car on a platform of stones, has become a trend among young men.

In the village of Rijal Alma, known for its traditional square stone houses decorated with quartz, the museum includes a display of mortar shells in coffin-shaped glass cases. It recalls the work of local sculptor Ibrahim Abumsmar, 36, a cartographer for the ministry of defence, who made a series of incense burners modelled on a mortar shell he found during battles with Houthi rebels on the Yemen border.

The emerging conceptual aesthetic is evident, with mixed results, in the nascent gallery scenes in Jeddah and Riyadh. The Alaan Artspace opened in Riyadh last week with a show for three female Saudi artists curated by Sara Raza, formerly of Tate Modern, and the Dubai-based Ayyam gallery is due to open a new space in Jeddah in November. The Athr gallery in Jeddah, which opened in 2009, has a strong roster of artists who it has exhibited in art fairs in Berlin, Instanbul and Dubai. But elsewhere in the city the recently opened Arabian Wings gallery displays mixed media assemblages that crudely combine traditional techniques with a flawed approximation of conceptualism.

Edge of Arabia’s third co-founder, British artist Stephen Stapleton, toured Saudi Arabia finding its hidden talent. He said: “Sometimes you go into someone’s house or studio and you’re like, ‘What the hell is this? It just makes the world uglier.’ But you have to appreciate the context. They’re trying to jump into the contemporary art world without art education or libraries. Almost everything was like that when we started. You’ve got to be able to sift through and see something interesting and genuine.”

Although university lecturers in Jeddah said they could not conceive of fine art being taught in the kingdom in future because of cultural sensitivities about representing the human body, the government is taking some steps to encourage an appetite for art.

Early next year the King Abdulaziz Centre for World Culture will open in Dhahran in the Eastern province. Run by Saudi Aramco, the state-owned oil company, it will include a cinema, exhibition hall and museum. However, artists in Abha said some officials in the ministry of culture were responding to the emerging conceptual scene by promoting more conservative artists. Paintings currently on the walls at al-Meftaha include dayglo horses and chocolate box-style silhouette images of children.

Mater said: “The way they’re choosing curators or directors, it’s unprofessional. Like when we go to biennales or exhibitions outside [Saudi Arabia] they say, ‘We have problem with choosing collections from Saudi Arabia because the ministry didn’t give the artwork that fits.’ It’s more the artwork which complements [the regime].

“That’s very dangerous if the art is not real and critical because it’s recording history. [But] it’s recording what the government would like the history to be. They’re directing the artists’ work. This is why we’re starting to show more outside the kingdom.”

Edge of Arabia’s move to London also follows criticism that Saudi-supported exhibitions, such as Hajj: Journey to the Heart of Islam at the British Museum, have lacked criticism of the kingdom. The group’s wealthy Saudi backers include Abdul Latif Jameel Community Initiatives, whose president, Mohammed Abdul Latif Jameel, is worth £3bn, and Jadwa Investment, worth £462m.

Stapleton said that while younger artists are taking on issues such as women’s rights, westerners should not expect them to outright condemn their rulers. Artists such as Mater and Gharem, while being critical of society, were still part of the establishment. “The art scene is part of a society that is the centre of the Islamic world – it resonates the values and traditions in Islam.”

But cultural exchange with the west is increasing. The British Council had its first show of modern and contemporary art, Out of Britain, in the kingdom in the summer, and has been inundated with applications from young Saudis for its art programmes.

Andrea Rose, the council’s director of visual arts, said the Saudi art scene was undergoing evolution rather than revolution. “There’s a guardedness about influences from the West, and a careful negotiation of how to modernise without westernising, but there’s more going on than necessarily meets the eye. Change is slow and incremental, rather than provocative and revolutionary. But it is happening from within, and often with great subtlety.”

?Ahmed Mater first won praise for combining x-rays of skeletons with Islamic illuminations (the decorative illustrations in Qur’anic manuscripts circumventing restrictions on representing the human body. “I wanted to use material related to my context in hospital and what we were doing before as a culture,” he said. “Illumination was the way we expressed ourselves in the Islamic era. X-ray is about representing the inside of the body and it’s illuminated.” In his project Yellow Cow, based on the story of the Golden Calf, he dyed a cow with saffron and manufactured a range of dairy products from its milk. His most famous piece, Magnetism, uses a black square magnet surrounded by iron filings to represent the pilgrimage to the Ka’ba.

The work of Abdulnasser Gharem reflects his career as a lieutenant colonel in the Saudi army, and includes Concrete, a series of paintings of concrete blocks used to protect buildings from terrorist attacks “They were put around embassies after 9/11. I thought, come on, do you think this is going to protect you against an ideology?” His other work includes a giant replica of an official rubber stamp inscribed with the words ‘Have a Bit of Commitment’ and ‘Amen’, which reflected how his work had previously been censored by the Saudi authorities.

In her films and photography Sarah Abu Abdallah, 22, explores gender roles and the act of covering up women’s bodies. Her film Saudi Automobile evokes her frustration at the Saudi ban on women driving through the act of painting a crashed car pink. She said: “This wishful gesture was the only way I could get myself a car – cold comfort for the current impossibility of my dream that I, as an independent person, can drive myself to work one day.”