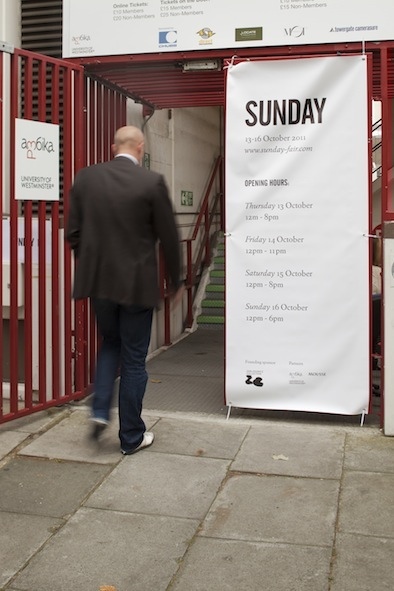 SUNDAY, the gallery–led art fair, is a platform for an intimate group of like-minded commercial galleries to present work from a range of emerging artists within a relaxed environment. Some of the new exhibitors this year include Christian Andersen (Copenhagen), Lisa Cooley (New York), Frutta (Rome), Seventeen (London) and RODEO (Istanbul). Returning galleries include BolteLang (Zurich), Gaudel de Stampa (Paris) and Tanya Leighton (Berlin). Nearly half the galleries contributing to the 2012 edition have been established for 3 years or less, embodying SUNDAY’s aim to introduce fresh international talent to audiences.

Artist Cornelia Baltes, exhibiting with Limoncello (London), will work directly onto the walls of the Ambika P3 space to produce a new, large-scale, temporary painting. Recently graduated from the Slade School of Fine Art, she has featured in Bloomberg New Contemporaries and the John Moores Painting Prize.

Simone Subal (New York) has devised an intergenerational presentation featuring drawings and paintings by Kiki Kogelni from the 1960’s, alongside recently produced videos by Erika Vogt. Although from different generations, both artists investigate the complexity of representation and issues relating to the formation of subjectivity. The juxtaposition of the two female artist’s work, acts as a meditation on what constitutes ‘contemporary’ and suggest that to be contemporary does not necessarily mean to be of the times, but instead to be with the times.

As part of SUNDAY School artist Jonathan Monk, in collaboration with Three Star Books and design team OK-RM, will produce Billboard Book Project – London. Installed on the mezzanine level, overlooking the rest of the fair, the work will consist of a giant internal billboard poster and publication that acknowledges everyone involved in the production of the project; from the artist himself through to the person who packed the work for shipping.

Chez Baz, Chez Chaz, is an artist-led bar produced by nascent curatorial duo B.C. (Barnie Page and Charlie Hood). Each day of the fair, an ‘artist du jour’ will style the overall look, feel and function of the space, producing a ‘totalwork’ that includes novel environments to eat and drink in, as well as entertaining artist led events.