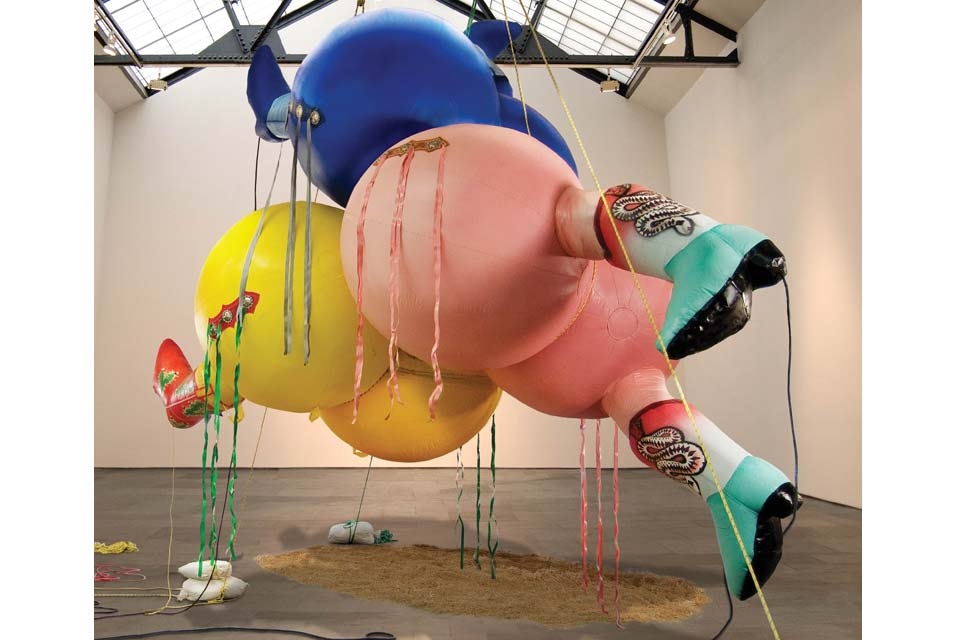 Betty Cuningham Gallery opened its 2012-13 season with Nancy Davidson, featuring her inflatable sculpture, Dustup. This is the artist’s first exhibition at the Gallery. Davidson, a sculptor and video artist, is known for her unique media – larger than life inflatable sculptures – and for her interest in American icons and gender issues. In 2005 with the support of a Creative Capital Grant, she began her exploration on the myth and reality of the cowgirl.

After researching western women’s history Davidson focused on the rodeo cowgirl. In this exhibition, Nancy Davidson’s Dustup offers a humorous, absurdist critique of the American cowgirl as a spectacle to admire, a tall tale fantasy of western legend. Like enormous puppets, the Dustup inflatables, suspended in midair, measuring 21 x 16 x 16 feet, combine playfulness and grandeur with a rodeo spirit. Davidson draws attention to the overblown, using satire to expand on the American fascination with the overly large, the ‘Super Sized.’ In addition to Dustup the exhibition includes two new sculptures, Dudette and Rowdyann and a video titled All Stories are True.

Nancy Davidson was born in Chicago. She received her MFA from the Art Institute of Chicago in 1975. Throughout her career, Davidson has been awarded numerous grants including ones from the Anonymous Was a Woman Foundation, the National Endowment for the Arts, the Massachusetts Council in the Arts, the Pollock-Krasner Foundation and Creative Capital. She has also been awarded residencies at the Yaddo and MacDowell colonies. Davidson’s sculptural works have been exhibited in a host of notable museums, including the Corcoran Gallery, Washington, DC, Carnegie Mellon University, Pittsburg, PA, The Whitney Museum of American Art at Champion, Stamford, CT, and the N.A.M.E. Gallery, Chicago, IL. The artist currently lives and works in New York City. 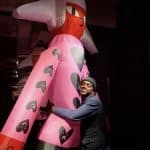 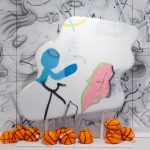 Wit, playful satire, intercultural mix. ‘Unblock Me You Coward’ offers this and much more

PUBLIC Gallery presents Unblock Me You Coward, a solo exhibition of the artist Lung. It features a new series of paintings, and a 30-meter-long sky dancer …