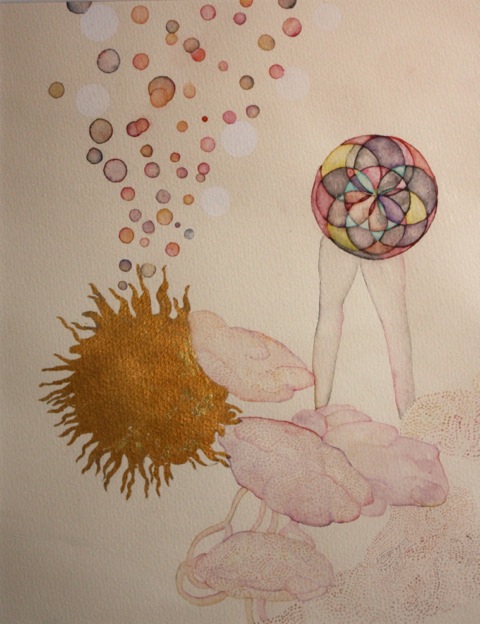 7th of September – 6th of October
ArtEco Gallery is to present “ENCOUNTER” with Alison Stolwood and Radhika Agarwala.

From glistening gold to cast bronze and the dark recesses of the cosmos the transformation of bestial forms, of butterflies, birds and bulls with geometric patterns, mechanized scans and mythical folklore unlocks unstable truths – of images, cultural histories and representation. Optical contortion, material dissolve and environmental displacement lie at the heart of Encounter, an exhibition that brings together works in photography, sculpture and painting. Approaching a likeness of being through lightness of touch the works question our approach to, and desire and control of, habitat and habitation. They describe evolving encounters with the material world and its spiritual counterpart that remind us of its fluctuating dimensions, its livingness.

Alison Stolwood’s works investigate the environment of the outdoors and its agents of action and activity, animals and organisms present within the landscape, animating it and shaping evolutionary cycles contingent to our own. Stolwood captures the fleeting transformations and moments of shift, she presses pause (with her camera) and alerts us to our own predicament through the mirror of the natural world that she presents. Stolwood’s images are alluring and elusive, a breath beyond our grasp. The truth of what we see is partial, poignant, playful and poetic. A bird scanned on each side (The Black Cap, 2012), its image retrieved post humorously, a delicate lightness and likeness, a ghost-image and a ghost-like image, light layered through physical luminosity, part radiograph but with newer technology. Bound in a dissolving void the two sides (halves) of the bird form a whole, like the pair of cows in Cow and Calf, 2009 divided by generation (twice), by their physical size and respective positions, and in the consciousness of an absent vitrine (Mother and Child Divided, 1993, Damien Hirst). Here the non-site, the antiseptic environment at odds with natural landscape is absent, we are just presented with landscape. When often the non-site is the selected ‘encompassing’ environment for Stolwood’s photographs. She brings the natural world into the studio, displacing the ordinary rhythm and cycle of the activity and subject she photographs. Butterflies shot in the controlled surroundings of a photographic studio, a bird scanned, and seeds organised against a black screen in the studio. In Seed – composite, 2011 we are made aware of the cosmos, the greatest reach of the natural world, which exists at a place far removed from what we can experience or even often comprehend. We gaze upon and marvel at what lies beyond our physical reach allowing it to touch us profoundly in escapism, in sacredness and in daydreams. The camera provides a lens to sight and view aspects of the immediate environment. Its contrivance fixed in the idea of looking out, and here as we look out we see the cosmos dissolve into a multitude of seeds, the germinating life force of plant life that makes our existence possible.

Radhika Agarwala’s works, in painting and sculpture, take form and direction from her upbringing in India and her cultural experiences in Western cities and capitals in the years since. The works invest in the spiritual dimensions at the core of vastly different ethics and visual languages between Asian and Western cultures, and make playful gesture towards a complex history and developing interconnection between the two. In her work hybridisation is actual and represented, actual through the conjunction of divergent cultural vantages that exhume the sacred with the secular, the profound with the mundane, and the figurative with the geometric. Represented through mythical, folkloric and animalistic forms that serve as open ‘unfixed’ narratives, creating new images as visual charms that hold and release repressed feelings, primal actions, fantasies and personal histories. From historical sources Agarwala’s works gravitate towards contemporary Western conventions of image making, viewing and pictorial content. Her works are additive, they multiple the channels of image making, some contingent to old master works, some detailing new social narratives and others still pronouncements of fiction and fantasy. The succession of visual images adds to the complexity of its system, and Agarwala explores this by working both directly and indirectly from historical sources. In her hands cultural stories presented visually and handed down through generations, as symbolist, representative and spiritual cyphers are re-woven and re-mastered. Her sources are varied and her allegiances are often temporal, drawn to the paradoxical, the dissident and the playful.

Amongst these are Bengali Kalighat paintings originating from temple paintings of gods and goddesses in the nineteenth century. Their accessibility and popularity over time enabled them, as religious icons, to evolve along social informed and culturally subversive secular roots. Elsewhere we might see glimpses of the illuminated manuscripts of the Italian renaissance, sixteenth century South Asian Mughal miniatures, or the works of Giuseppe Arcimboldo whose paintings later informed surrealist thinking. Across her works colour is often set against gold, or gold leaf, the material colour of the sun. Drawing alchemically on past precedents Agarwala’s works might remain primal in their proposal, suggesting that our encounter with gold is an encounter not with wealth but with the sun itself, with the material transformation of light into life.