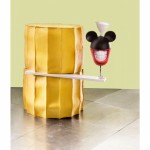 Other Criteria (Hinde Street) will exhibit works by Antonio Marguet. The exhibition titled ‘Exotic Juicy Tutti Frutti’, will be on display in the Photography Room, a space on the lower ground floor dedicated to photography.

Each photograph takes its title from a variety of car air fresheners, named extravagantly to stimulate the imagination. The reference to these artificial fragrances is not just a comment on the deodorant industry. Conceptually, it plays on the current day necessity of creating one’s own, personal brand, especially in the realms of social media. Marguet uses these air fresheners and deodorants as metaphors for commodified brand enhancers.

The photographs in this series show Marguet’s fascination with what he sees as ‘the excess of subjectivity and self-absorption in the social media age’. It is the seductive nature of being projected as a commodity beyond the power of the rational gaze that inspires his work. Marguet’s aim is to create a myth or fetish around an object without the object existing physically, which is similar to how we mirror ourselves through the fictional narratives we build on the online platforms of social media. Marguet’s work is photography-based, and although he creates ‘object-sculptures’, it is only the image that remains as the end result.

Antonio Marguet
A born collector from the south of Spain, Antonio first started ‘camera snapping’ as a stylist. As a visual artist based in London and with a background in Fine Art, he brings together a range of interdisciplinary skills.

Recipient of the Sproxton Award 2011 for best work of his graduating year, Antonio recently completed his MA in Photography at the London College of Communication (University of Arts). This year, he was part of the emerging best at the London Art Fair with Catlin Art Guide 2012. He has an upcoming show at Flowers East and has recently been shortlisted to exhibit in the Saatchi Gallery’s New Sensations 2012, which will run alongside the Frieze Art Fair in October.

VISUAL NOISE a new art fair for photographers whose graduating shows were disrupted by Covid-19.

Buy renowned photographers prints to help India with the second wave of Covid-19.