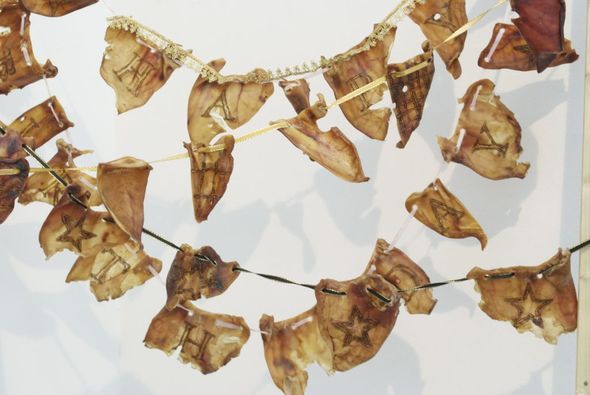 The WW Gallery are delighted to present a solo show of works by Ayuko Sugiura. Working with sculpture and installation, Sugiura presents the viewer with a series of new skins, whether these are patterns projected onto a surface, layers of silicone, or tokens of identity; these illusory and visceral second skins present the viewer with an opportunity to question the invisible and intrinsic components of our cultural identity.

Examining the instinctual nature of religion in contemporary culture, Sugiura uses arches, crucifixes and icons as the basic structure for many of her sculptures. These references, estranged from their context, become as difficult to identify as the influence of Christianity in daily modern life.

The contemporary invisibility of faith; a sense of a belief in something whose shape and form we cannot identify, and who we can no longer give a name to, drives Ayuko Sugiura to search within her own lexicon as an artist for familiar textures and forms with which she can create a personal icon.

Looking through a hybridised cultural skin confused by global homogenisation, Sugiura’s explorations of traditions, practices and cultures approach the uncanny. In her surreal use of familiar symbols twisted into an unfamiliar iconography, birthday bunting made from pig’s ears, silicone cathedrals and pink elephant crucifixes are all results of the clash of cultural references. Sugiura’s works become hybrid forms, distorting our preconceptions and transforming our inherited perspectives.

Beneath the playfully surreal juxtapositions of materials and bright colours, there is also a more sinister element at work. The palpable legacy of sci-fi and psychological thriller leads the viewer to question how far the duality and multiplicity of identity, its consistently shifting form, is the realisation and revelation of a contemporary psychosis.

Ayuko Sugiura is an MFA Fine Arts/Sculpture graduate of the Slade School of Art, University of the Arts London. She was born in Tokyo, Japan and has been living and working in London since 2008. She is represented by the WW Gallery.