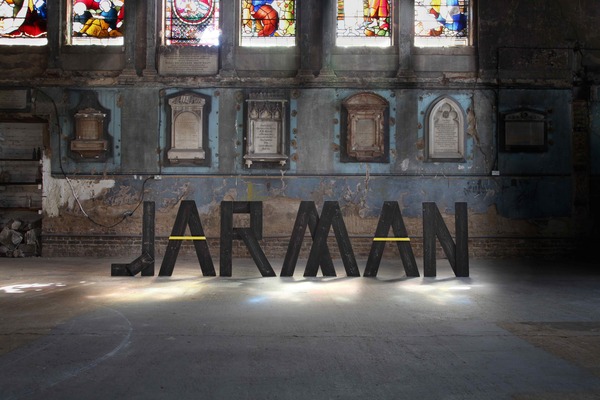 The winner will be announced at a special event on 6th November at the Whitechapel Gallery, receiving combined prize money of £10,000 and a film commission for Channel 4’s short-form arts strand, Random Acts commission. Three further artists will also be commissioned for Random Acts this year.

Selected from a record number of artist entries, nominated by experts across the UK contemporary arts sector, the extended shortlist, presents the work of ten artists who use the film and video medium in a range of diverse and interesting ways. It offers a comprehensive survey of the work and practice of UK based film and video artists, and celebrates the rich and eclectic array of work emerging in recent years.

Launched in 2008, the Film London Jarman Award gives recognition and support to artists working with the moving image and whose work resists conventional definition, encompassing innovation and excellence. The Award is inspired by visionary avant-garde film-maker Derek Jarman, one of the most esteemed and controversial artists of the late 20th Century.

A UK touring programme showcasing works by the 10 shortlisted artists will take place from 12 September to 3 November at venues across the UK, including FACT, Liverpool , CCA, Glasgow and CIRCA Projects Newcastle . The tour will culminate in a special event at London’s Whitechapel Gallery on Saturday 3 November with screenings, Q&As and performances. Full details of the touring programme including further dates, will be announced shortly.

Following in the footsteps of previous winners Luke Fowler (2008), Lindsay Seers (2009), Emily Wardill (2010), and Anja Kirschner & David Panos (2011), the 2012 winner of the Film London Jarman Award will be awarded a £10,000 cash prize and a unique broadcast commission – to make film-based artwork for Channel 4’s acclaimed Random Acts strand, for which Film London is one of the commissioning partners.

A change for the 2012 Film London Jarman Award, is that three further artists, selected from the shortlist by Channel 4 and the jury panel, will also be commissioned to make a short film for Random Acts. The total value of the four Random Acts commissions is £16,000.

This is the only Award of its kind where an artist is rewarded with both financial assistance to enable them to flourish and the exceptional opportunity to broadcast their work on primetime national television.

The 2012 Film London Jarman Award winner will be announced at a special event on Tuesday 6th November at the Whitechapel Gallery.

Films by the shortlisted artists will tour the UK in advance of the Award night, at the following venues, with more screenings to be announced:

A day of screenings and discussion with shortlisted artists will take place at the Whitechapel Gallery, London on Saturday 3rd November

KAREN MIRZA AND BRAD BUTLER
Karen Mirza and Brad Butler have worked together since 1998, and in 2004 formed no.w.here, an artist-run space. Their practice is centred upon collaboration, dialogue and the social; early works emerged from their interest in seminal avant-garde film and since 2007 they have pursued a strain of practice entitled The Museum of Non Participation. This ongoing body of work confronts (non) participation and the socio-political in art works. Mirza and Butler have recently completed a new film, Deep State, and its companion work, Hold Your Ground. In Spring 2013 they will present a major solo exhibition at the Walker Art Center in Minneapolis.

MARCUS COATES
Coates’ practice questions how we perceive humaness through imagined non-human realities. An extensive knowledge and understanding of British wildlife has led him to create unique interpretations of the natural world and its evolving relationship with society. Through self designed rituals informed by traditional cultures, he consults a non-conscious world of animals and birds to seek relevant information. He has performed ‘consultations’ with a variety of clients including The Mayor of Holon, Israel, A Residents Housing Association in Liverpool, UK, and the City Council of Ikebukuro, Tokyo. Coates received the Paul Hamlyn Visual Arts Award 2008 and the Diawa Foundation Art Prize 2009 and was the Calouste Gulbenkian Artist in Residence in the Galapagos Islands, Ecuador, 2008.

SHEZAD DAWOOD
Born in London, Dawood trained at Central St Martin’s and the Royal College of Art before undertaking a PhD at Leeds Metropolitan University. Dawood works across various media and much of his practice involves collaboration, frequently working with other artists to create unique networks around a given project or site. These networks map across different geographic locations and communities and are particularly concerned with acts of translation and restaging. For example, his collaborative film project, Feature (2008), which relocated the action of a traditional western to the English countryside, slipping into other sub-genres such as the zombie-flick, and Wagnerian opera, as well as South Asian god-flick. Dawood is one of the winners of the 2011 Abraaj Capital Art Prize. His work has been exhibited internationally, including as part of ‘Altermodern’, curated by Nicolas Bourriaud, at Tate Britain, and the 53rd Venice Biennale (both 2009), and the Busan Biennale in Korea (2010). Recent projects include a solo touring exhibition opening at Modern Art Oxford in April 2012 and an upcoming solo exhibition at Parasol Unit, London (2013).

BENEDICT DREW
Benedict Drew works across video, performance, sound and other media. He graduated from Slade School of Fine Art in 2011. Recent solo exhibitions include This Is Feedback at Outpost, Norwich. Gliss, Cell Project Space, The Persuaders, Circa Site / AV Festival, Stephenson Works, Newcastle. Group exhibitions include Containing the Possible, Pippy Houldsworth Gallery.There Is Not And Never Has Been Anything To Understand!, ACS Gallery. Things That Have Interested Me, Waterside Contemporary, and SOUNDWORKS, ICA. He is currently lead-artist for Chisenhale Gallery’s Propeller Project and a LUX Associate Artist.

NATHANIEL MELLORS
Nathaniel Mellors is an artist and musician who lives and works in Amsterdam & London. His work explores relationships between language, power and humour through film & video and different modes of object production which are contingent on his script-writing.

He is a Senior Lecturer in Contemporary Art Practice at Leeds Metropolitan University and an advisor at the Rijksakademie van beeldende kunsten, Amsterdam. Mellors studied Fine Art at the Ruskin School, Oxford University (1996-99) and the Royal College of Art, London (1999-2001). He is a co-founder of Junior Aspirin Records and is / was a member of the groups God in Hackney, Advanced Sportswear and Skill 7 Stamina 12. Recent exhibitions include ILLUMInations – the 54th Venice Biennale (2011); British Art Show 7 – In The Days of the Comet, 2010-11; Altermodern, Tate Triennial 2009 and solo exhibitions at Matt’s Gallery, London (2012); Salle de Bains, Lyon (2012); I.C.A., London (2011); SMART Projects, Amsterdam (2011) and Cobra Museum, Amstelveen (2011).

JAMES RICHARDS
Richards is an artist working in video and sculpture as well as organizing screenings and working on exhibition design, after graduating from Chelsea School of Art and has participated in the LUX Associate Artist Programme. He was shortlisted for the Luma Foundation, Luma award 2011 and will be resident in Berlin with the DAAD in 2013. Recent solo shows have been held at CCA Kitakyushu (2012) Chisenhale, London and RODEO, Istanbul (both 2011). He has also curated screenings for a number venues including Pleasuredome, Toronto, ICA, London, Serpentine Gallery, London and Light Industry, New York as well as collaborating with Dan Kidner and George Clark on the exhibition Infermental, Focal Point Gallery, Southend in 2010. Recent collaborative projects include An Echo Button, with Ed Atkins and Haroon Mirza for Performa 11 (2011) and DISAMBIGUATION with Steve Reinke, Trinity Square Video, Toronto (2010)

BEN RIVERS
Ben Rivers studied Fine Art at Falmouth School of Art, initially in sculpture before moving into photography and super8 film. After his degree he taught himself 16mm filmmaking and hand-processing. His first film The Joy of Walking, toured the world as part of ‘Experiments in Terror’ organised by Other Cinema in San Francisco. Since then he has made over 15 films, showing extensively at international film festivals, as well as galleries, and theatres around the UK. In 1996 he co-founded and has since co-managed/programmed Brighton Cinematheque – renowned for screening a unique programme of film from its earliest days through to the latest artists’ film and video. His first feature length film Two Years at Sea was presented in September 2011 in the Orizzonti section at the 68th Venice International Film Festival and won the FIPRESCI prize.

MATT STOKES
Matt Stokes’s practice stems from a long-term inquiry into subcultures and phenomena that provide a sense of collectivity, shaping and influencing people’s lives and identities. His works are made by immersing himself in settings through which collaborations with informal communities arise, resulting in films, installations and events. Stokes lives and works in Gateshead and Newcastle. Recent solo exhibitions include Nuestro tiempo/Our Time, Centro Andaluz de Arte Contemporaneo, Seville (2011), Cantata Profana, Baltic Centre for Contemporary Art, Gateshead (2011), The Distant Sound, De Hallen, Haarlem (2011), No Place Else Better Than Here, Kunsthalle Fridericianum, Kassel (2010).

THOMSON AND CRAIGHEAD
Jon Thomson and Alison Craighead are fascinated how globalisation and networked global communications have been re-shaping the way we all perceive and understand the world around us. They live and work in London and Kingussie in the highlands of Scotland making artworks and installations for galleries, museums and site-specific locations that include the worldwide web. Recent exhibitions include; Haus der Kunst, Munich; BFI Southbank, London; Berkeley Art Museum, California; Artists Space, New York; Tang Contemporary, Beijing and Moderna Museet, Stockholm. Jon is Reader in Fine Art at The Slade School of Fine Art, University College London, while Alison is Reader in contemporary art and visual culture at University of Westminster and lectures in fine art at Goldsmiths University, London. In Spring 2013, Jon and Alison will have a solo exhibition of recent work at Carroll/Fletcher Gallery in London. 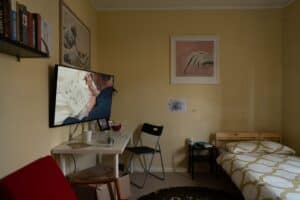