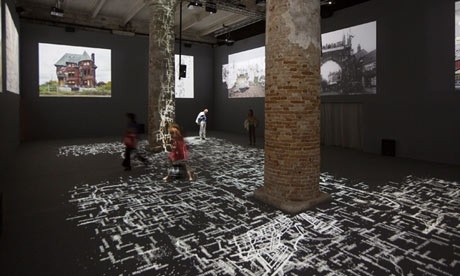 A part of the Common Ground exhibition at the Venice Architectural Biennale. Photograph: David Levene for the Guardian

Venice’s Giardini public park is filled with the sound of popping prosecco corks, snapping cameras and multilingual chatter, but as the global architectural community flocks to the city for the start of the 13th Architecture Biennale, there’s a mood of reassessment in the air.

For the past two decades, the sector has been dominated by big names and spectacular projects, but there’s a sense in Venice that there is a need to re-engage with users of architecture.

This reflective tone has largely been set by this year’s director, British architect Sir David Chipperfield. Internationally renowned, awarded and admired, Chipperfield is very close to the top of the architectural game, but his chosen theme for the event is Common Ground – a title that suggests inclusivity and anti-elitism.

“Architecture has become a sort of exotic fruit,” says Chipperfield. “It just sort of happens in certain places where it gets watered.

“The more it becomes a special thing, the less chance we have to deal with it on a day-to-day basis. What architecture is and how it fits into the community is a story I want to tell in this.”

To fill the Biennale’s main exhibition spaces – the vast Arsenale, a series of former naval buildings, and the central pavilion of the nearby Giardini – Chipperfield has invited 103 architects, artists, photographers and academics to contribute.

There are still big names aplenty: Norman Foster, Zaha Hadid, Rem Koolhaas, Alvaro Siza, Peter Zumthor, not to mention 40 British architects. But Chipperfield forbade his contributors from simply presenting models of their latest work in the hope of drumming up some trade. “It’s about architecture, not architects,” he says.

In the 55 national pavilions – the other component of the Biennale – the same spirit of questioning is reflected, nowhere more so than at the British Pavilion, curated by the British Council.

Its exhibition, Venice Takeaway, is subtitled Ideas to Change British Architecture, and displays the findings of 10 architects who travelled to other countries to research approaches relevant to the UK.

One team presents a 1980s programme of building prefabricated schools in Brazil initiated by legendary architect Oscar Niemeyer, for example. Another looked at how Argentinian architects developed new ways of self-funding construction projects following the country’s economic crisis. Another mischievously compares the planning policies of the Communist party of China with those of the coalition government.

“There’s a feeling that British architecture is up for grabs at the moment,” says the exhibition’s co-curator, Vicky Richardson.

“Our economic situation means that a whole generation of British architects is having difficulty finding work. But there’s also the coalition government’s new guidelines on planning, which nobody knows quite how they’re going to pan out, and the abolition of Cabe [the advisory panel on architectural design, set up by New Labour, which has now been folded into the Design Council].

As well as redefining architecture, the Biennale could represent another redefinition of the national identity.

Like the London 2012 Olympics and its accompanying Cultural Olympiad (which was also overseen by the British Council), Britain’s place in this year’s Biennale seems to be less about competing with other countries than about making connections with them, listening and learning from them and forging a global cultural profile that is not simply post-imperial, but post-national. Not that self-interest can be completely discounted from this inclusive strategy.

Whether the Biennale will make an impact on British architecture or architecture is another question, especially when it comes to commitments to global problems and the world’s less privileged – which, from the perspective of Venice, is just about everyone.

Beneath the theme of Common Ground lies the irony that the Biennale takes place in one of the world’s most expensive cities, and that the occasion is marked by innumerable parties, dinners and exclusive events. Ideas are exchanged as the prosecco flows.

Chipperfield doesn’t overstate the Biennale’s power, but he believes it is important for architects to gather somewhere and he is striving to get them to engage with the world “outside the walls of this church”.