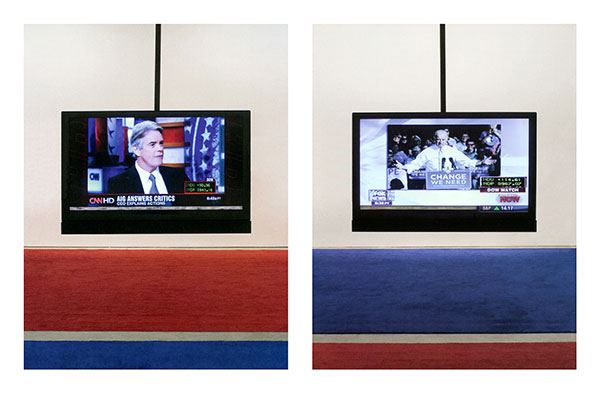 The New Museum is to present “Your Land/My Land: Election ’12,” (2012) an installation by artist Jonathan Horowitz to coincide with the 2012 American presidential election season. The exhibition will be staged simultaneously at art museums across the US. It will be on view at the New Museum in New York from October 10th –November 18th, 2012.

“Your Land/My Land: Election ’12” is a reimagined installation originally presented by Horowitz during the 2008 presidential election. At each location (as in ’08), red and blue area rugs will divide the exhibition space into opposing zones, reflecting America’s color-coded, political, and cultural divide. Back-to-back monitors will be suspended between the carpets, with one broadcasting a live feed of Fox News, the other of CNN. The installation will provide a location for people to gather and watch coverage of as well as talk about the presidential election. Its central trope is a divided United States swathed in only red and blue.

At the New Museum, the installation will occupy the Lobby, incorporating the front window and its view on to the street. The text “Your Land/My Land” will be adhered to the window, referencing This Land is Your Land by Woody Guthrie, which originally addressed the issue of land ownership. According to Horowitz, “If race and gender were the defining themes of the ’08 election, economic policy and economic disparity will likely be the defining themes of the 2012 election. The placement of the text on the window will extend this metaphor to the land of the museum and the land outside. To some, museums are decidedly blue—elitist bastions of liberalism—to others, they are lynchpins of a capitalist art market analogous to other capitalist markets that have been collapsing around us.”

When “Your Land/My Land” opens, a portrait of President Obama, as the current representative of all Americans, will hang from the ceiling between the two sides and a portrait of Mitt Romney will sit on the floor. On election night, each venue will host an election returns event, with the installation becoming a minimalist backdrop. If Obama wins, the position of the two portraits will remain the same. Should Obama be unseated, their positions will be switched.

The installation will be customized for each particular museum and attention will be drawn to the role that cultural institutions can play in a democracy. Over the course of the exhibition, some participating venues will offer voter registration and host presidential debate screenings. A website, accessible at each museum, will link the different locations and visitors will be invited to post comments. Visitors may also connect on Twitter using #YLML.

About the Artist
Since the early 1990s, Horowitz has made art that combines the imagery and ambivalence of Pop Art with the engaged criticality of conceptualism. Often based on popular commercial sources, his work examines the deep-seated links between consumerism and political consciousness, as well as the political silences of postwar art. Recent solo exhibitions include “Minimalist Works from the Holocaust Museum,” Dundee Contemporary Arts, Scotland (2010), “Apocalypto Now,” Museum Ludwig, Cologne (2009), and the retrospective exhibition, “And/Or,” P.S.1, New York (2009). 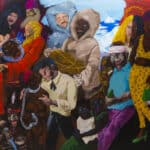 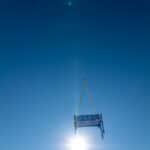 A 700kg blue bench appears out of the sky in St. Moritz. 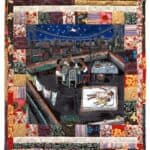