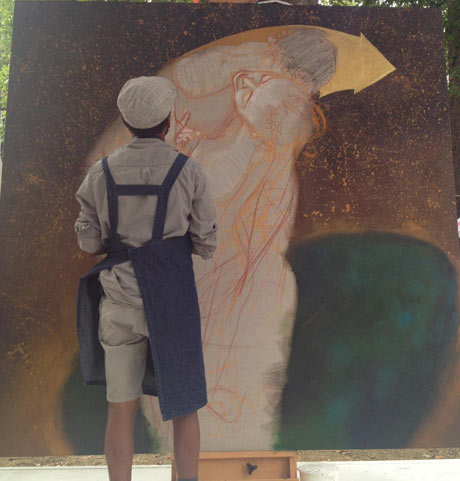 Mode 2 is delicately brushing an expanse of green on to a big canvas he has already marked out with a passionate sketch of embracing lovers. He’s working in the open air, on a stage set up in a public garden across the road from London’s Victoria station. He’s fascinating to watch. He turns from his intense work for a moment to tell the DJs they’ve got their music all wrong for this live street art event – it’s not conducive to his brushstrokes.

“The thinking man of the British graffiti movement”, as Mode 2 has been called, is living up to that praise by taking today’s challenge seriously. At first sight, it is an unlikely concept: a crew of leading lights from the street art scene making new works inspired by the great Austrian artist Gustav Klimt. What to expect? Maybe Klimt’s Kiss restaged as kissing policemen? Mode 2 – the first artist to really get started in this day-long art session – is taking it a lot more literally than that. He is painting a direct and very convincing homage to Klimt’s art of love.

Look at his website – warning, adult content, as the site itself acknowledges – and it’s clear why Mode 2’s response to Klimt is so sensual. His art oozes sexuality. His works rescue pornographic pleasure from its usual modern mode of photographic banality to the more delicate visual register of drawing and painting. Delicate but not bland: pictures such as Chubby Stockings are cheerfully provocative. Mode 2 has been resident artist at the sex boutique Coco de Mer. I am not surprised.

Nothing changes. At the turn of the 20th century, Klimt was Vienna’s high priest of love. His paintings such as Nuda Veritas (1899) and Judith (1901) are deliriously sensual. Sex is truth: that is what Klimt is saying in Nuda Veritas, which translates as naked truth. His vision of the Biblical heroine Judith apparently having an orgasm after beheading Holofernes demonstrates that Klimt is no honeyed sentimentalist – the eroticism he celebrates is the rich and dark imaginative realm analysed by his Viennese contemporary Sigmund Freud.

Some artists suffer from being forgotten. Klimt arguably suffers from being so famous people take him for granted as some sort of softy. But even his most famous painting, The Kiss, deserves iconic status: it is a perfect image of souls blending in bliss. Mode 2’s raw homage is just what Klimt needs and deserves.