Crazy golftime for Hitler: should we salute the Chapman brothers' statue? - FAD Magazine
Skip to content 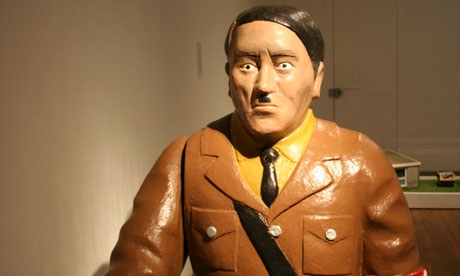 Heil in one … Jake and Dinos Chapman’s Adolf Hitler at the Adventureland Golf exhibition in Blackpool Photograph: Grundy Art Gallery

This article titled “Crazy golftime for Hitler: should we salute the Chapman brothers’ statue?” was written by Jonathan Jones, for theguardian.com on Wednesday 15th August 2012 11.00 UTC

Hitler golf? Now that’s what I call crazy. An exhibition called Adventureland Golf that has just opened at the Grundy Art Gallery in Blackpool (where else?) features crazy golf course obstacles created by artists who include David Shrigley, Gary Webb, and Jake and Dinos Chapman.

Can you guess which of them is responsible for a lifelike statue of Hitler’s head and torso, its arm poised to rise in a Nazi salute every time the ball goes through a hole between its legs?

Take a bow, Chapmans. Or give a salute, whatever.

In a bit of national publicity that must be welcome to any exhibition opening in the middle of August, Michael Samuels of the Board of Deputies of British Jews has condemned the Chapman brothers’ piece, calling it “tasteless” and declaring that it has “absolutely no artistic value whatsoever”.

Is it worth him making those comments? What has been gained by them? The exhibition is in the news as a result. The Hitler artwork will be seen by many more people than would otherwise have attended the Grundy. Surely this is an object lesson in how not to criticise art you find offensive.

Artists have the right to offend. We do not have the right, as citizens, to be free from every image that upsets, shocks, or even disgusts us. To call this crazy golf representation of Adolf Hitler “tasteless” is a bit like calling the Colossus of Rhodes “colossal”. Does anyone think the artists were trying to be anything other than tasteless?

I only hope Mr Samuels is never exposed to the Chapmans’ much more ambitious (and famous) work Hell, which features thousands of melted, melded and otherwise abused toy Nazis enacting an apocalyptic vision of torture and death.

But when does an image of Hitler become offensive? Hitler as a crazy golf statue apparently offends. But what about Basil Fawlty doing his funny walk, Mel Brooks’s Hitler musical in The Producers, or the bizarrely characterful portrayal of Hitler in the film Downfall?

Why should the Blackpool Hitler be seen as an outrage too far, when this vicious mass murderer is such a familiar, even comic image in our culture?

The trouble seems to lie in our belief that statues are honorific. To make a statue of someone, even as a proposal for an imaginary crazy golf course, is – we assume – to praise and ennoble them. That’s why statues get toppled in revolutions and wars. The exhibition in Blackpool also includes an image of dictator Saddam Hussein. Is that praising him?

Does the crazy-golf Hitler have artistic value? As an exercise in causing offence, it is apparently quite effective. That may not be the highest artistic achievement, but it’s not bad for mid-August.