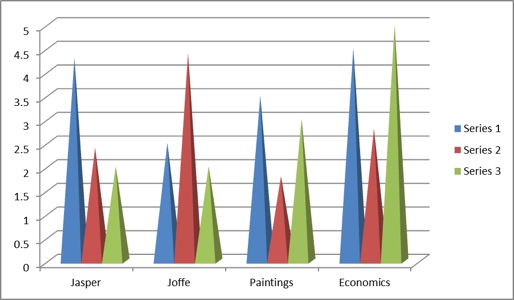 Chateau Joffe presents a series of paintings about economics: offices, Chinese and US factories, slaves, labour, bankers, mortgages and derivatives. All the work originates from the world image bank of Flickr. Joffe constructs a visual vocabulary of the abstract terms which are used in discussing the economy. An email discussion between artists, collectors, and economists will be published to mark the opening of “Economics”.

Chateau Joffe, located off Bishopsgate, is on the border between the City of London and Shoreditch, thus straddling the worlds of finance and art.
Shoreditch, London Unit 3, 7C Plough Yard, EC2A 3LP www.jasperjoffe.com

Joffe, born 1975, studied at The Royal College where he was taught by Peter Doig and Rose Finn?Kelcey. He has a reputation for his alternative art performances, extravagant initiatives and controversial paintings. Jasper Joffe came to media attention with his performance at the Chisenhale gallery ’24 paintings in 24 hours’ in 1999, in which he questioned the relation between time and value. He founded the wildly popular Free Art Fair in 2007, which took place during Frieze week and he sensationally sold a candy?coloured portrait of the Nazi Heinrich Himmler to Charles Saatchi in 2008. In 2009 he sold all his possessions at the Idea Generation Gallery in London. In 2010 he exhibited 21 Great British Jews of the 21st Century in a synagogue in Kaunas Lithuania.

His most recent show was “Power & Beauty” at Kenny Schachter Rove Gallery. He has collaborated with artist Harry Pye on projects such as The Tate Modern in a dry cleaner, their own handmade 99p shop, and ‘Joffe et Pye’ last summer’s show at Chateau Joffe.

Ekow Eshun on Radio 4 said of the show: ‘Intense feelings about love, loneliness and fear, anxiety desire and hope and ambition all come into play into these paintings. Very powerful I thought. What could have been fey, arch or game playing was actually very warm.”

“There’s no artist on earth other than Jasper Joffe who would have painted Himmler this way, using these brush strokes and candy colours”. Charles Saatchi, Sunday Times 2008