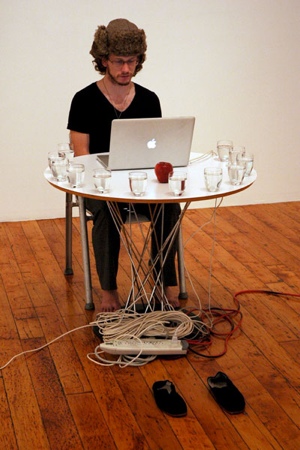 1.If you weren’t an artist, what else would you be?
I am that I am.

2. Can you tell us more about your work and what are the main ideas you would like to express?
I’m not always connected to the ideas I want to express until I’m actually expressing them, but I’ve found over the years it tends to do a lot with consumption and desire in contemporary culture. Also identity and the representation of our online “selves.”

As far as saying more about the work, I try to leave that to the professionals as much as possible. Well, or to the work itself.

3. How do you start the process of making work?
I usually just start doing something. Often I’m reacting to an event, or to another work of art, or something else that has happened recently that inspires and/or pisses me off.

4. Do you consider the viewer, when making your work?
With the performances, always. I’m constantly learning from them, and how different audiences react (or not). What works, what doesn’t. For the drawings and collages audience/reception isn’t as much of a concern.

6. Name 3 of your least favourite artists.
I could name a few, but instead I choose not to consider these artists. Considering them gives them a power they don’t deserve and aren’t worthy of.

7. What defines something as a work of art?
When people use language to package it as such.

8. In times of austerity, do you think art has a moral obligation to respond topically?Art has no obligation. Humans maybe do, and one manner of expressing that might be art.

9. Anytime, any place – which artist’s body would you most like to inhabit?
My own. Right now.

10. What is your favourite ‘ism’?
No isms for me thanks! Though if a pineapple were pressed to my pinky, I’d probably say absurdism.

11. What was the most intelligent thing that someone said or wrote about your work?
No idea. Though one of the most memorable, and earliest, was something that James Wagner wrote, to the effect that work like mine made him not despair of the art world. That was pretty flattering and humbling.

12. And the dumbest?
Pretty much anything this one particular curmudgeon has said about my work. Always gets a lulz out of me. Not worth linking to. It’s dumb. Though dumb can be just as valuable as intelligent. Any strong opinions are valuable.

13. Which artists would you most like to rip off, sorry, I mean appropriate as a critique of originality and authorship?
None. My critiques tend to land more in relationship to economies and transparency than of authorship. The “authorship” field is pretty well-trodden by a lot of artists much smarter than myself.

14. Do you care what your art costs? State your reasons!
Of course I do! Partly because I am currently living off its sales, but more because I value the time I spend thinking about it and producing it. I’m dedicating my life to it. My obligation is to honor the work as best I can. But I think the question of “value” is more interesting than “cost.” How much I value something does not always correlate to how much it “costs.” And that goes both ways. Up and down. Especially relative to my own valuations, and the valuations of others. In general I try to not to over- or under-value anything. In the art world, this is an astonishingly complex task. A process that is often built upon smoke that’s built upon a house of cards with a dangling mirror-dome above it.

15. If MoMA and the Tate and the Pompidou wanted to acquire one of your works each, which would you want them to have?
As of this moment, none of it. Increasingly I’m not a fan of institutions with huge collections, and the amount of resources consumed in an effort to preserve and display physical objects of “cultural relevance.” So if they wanted/were to acquire anything of mine, I’d want it to be something that addressed that issue somehow. In general I want to take up space with my ideas, not with more stuff.

16. What’s next for you?
#RunOfTheMill. Which is a sort of Instagram performance mashing up real-time images of a specific location by festival-goers, with my own image-interventions that will attempt to create an absurd alternate history that spans the Universal timeline. Or it will be something totally different. Still working out the details. Also up to some other things I can’t talk about yet. 😉