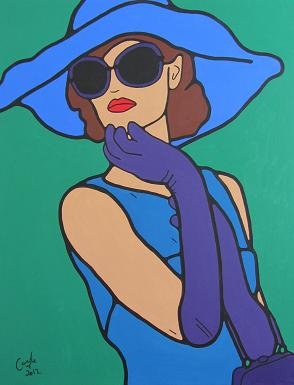 You can also submit your work for inclusion on FAD just use our Facebook Page to submit it,please add info about your work and about yourself Good Luck !

Emma Coyle has been exhibiting regularly since graduating with a B.A degree in Fine art from the National College of Art, Dublin Ireland, in 2003. She has been in a number of exhibitions in Europe and America, and has exhibited alongside artists such as Jeff Koons, Yoko Ono, Ed Ruscha and Kiki Smith.

While living in Dublin Ireland Coyle exhibited in the Tramyard gallery, the Oisin gallery, exhibited for the Irish National Portrait exhibition in 2005, and exhibited for charities in the Royal Hibernian Academy and Adam’s Fine Art auctioneers.
She has also written many art reviews that have been published in an Irish art journal.

Before moving to London in 2006 Coyle had solo exhibitions in the Signal art centre in Co. Wicklow and the Bank of Irelands art centre in Dublin city, and was said to be ‘one of the cities most promising new artist’ {Metro Life news paper- January 2006}, and a ‘rising young artist’ {Irish Independent- May 2006}.

Since moving to London, Coyle has exhibited in numerous galleries throughout the city, including a solo show in the West End. Her work has appeared in The Sunday Time STYLE supplement, and she has also continually contributed art work to charities.

While exhibiting in London, Coyle has expanded her audience by exhibiting in Los Angeles, and in several galleries in New York City, where her work has been positively received.