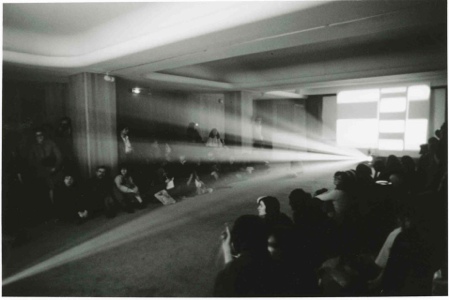 Two recent major acquisitions of film and performance, Lis Rhodes’ Light Music 1975 and Suzanne Lacy’s Crystal Quilt 1985-87 go on display for the first time in The Tanks at Tate Modern from today. Both works were initially conceived and experienced as performance works. Crystal Quilt has not been shown in its full form since the original events in 1987. First shown at the London Filmmakers Cooperative in 1975, Light Music is an expanded cinema work that has subsequently evolved in form. It is presented as a looping installation for the first time. Each artist worked with the curators at Tate Modern to re-conceive these key performance works as exhibition pieces while maintaining the dynamism and outlook of the original performances. Presented in the first museum spaces permanently dedicated to live art, these works exemplify the ambition of The Tanks programme: presenting performance, film and time-based art within the museum and anchoring Tate’s live and film programmes in its mission to show art within important historical narratives.

Suzanne Lacy: The Crystal Quilt
On 10 May 1987 in Minneapolis, 430 women over the age of 60 gathered to share their views on growing older. The resulting performance, The Crystal Quilt, was broadcast live on television and attended by over 3,000 people. It was the culmination of the Whisper Minnesota Project, a three-year public artwork empowering and giving a voice to older women. The process was consciously guided by a desire to represent diverse ethnic and social backgrounds alongside life experience and achievements, forming an active comment on the representation of older women in the media. The Crystal Quilt now exists in the form of a video, documentary, quilt, photographs and sound piece, combining the original elements of performance, activism and broadcast in an ambitious work that fuses social responsibility with the power of aesthetics: something Suzanne Lacy has pioneered in her long career as activist, artist, writer and teacher.

Lis Rhodes: Light Music
Light Music is, in a sense, a musical score and a cinematic environment in which the audience is invited to intervene. Motivated by the absence of women composers in the European musical tradition, Rhodes composed the ‘score’ as a series of black and white line drawings that were filmed using a rostrum camera. The picture was then printed over the film soundtrack. When the film is projected, the intervals between a pattern of lines register as differentiated noise or ‘notes’. The images create the sound and the sound creates the images – an aural equivalent to the changing screen image can be heard. Two projectors facing one another play the film both together and differently. The projector beams become ethereal sculptural forms comprised of light, shadow and theatrical smoke. Rather than be passive spectators, viewers are encouraged to move between the screens, engaging with the projection beam and becoming participants in a collective event. “The concept of cinema has always tended to straighten things out”, Rhodes has said. “Light Music does not meet this prescription. It is more or less different every time it is screened, and this remains the case while the audience occupies the space of projection.” Suzanne Lacy (USA, b1945) has worked collaboratively with artists and communities since the 1970s. In 1991 she founded TEAM (Teens + Educators + Artists + Media Makers) with photographer Chris Johnson and producer Annice Jacoby. As a writer, she edited the influential Mapping the Terrain: New Genre Public Art in 1995, a book that prefigured much current writing on politically relevant performance art. Lacy was Dean of the School of Fine Arts at the California College of Arts from 1987 to 1997, between 1996 and 1997 she co-founded the Visual and Public Art Institute at California State University at Monterey Bay with artist Judith Baca, and in 1998 she became Founding Director of the Center for Art and Public Life. She is currently the Chair of Fine Arts at Otis College of Art and Design in Los Angeles.