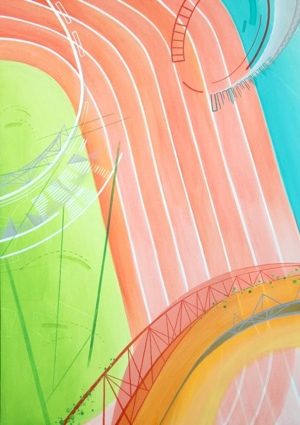 On Your Marks Acrylic on Canvas

Zanny presents her first solo exhibition at Neville Johnson’s London showroom. As the Olympic sporting venues have been completed and await the games, her new series of works on canvas focus on the architecture and graphic language of the Olympic stadium, velodrome and aquatics centre and the energy of the athletes who will compete in them. The solo show provides a fresh perspective on her frenetic architectural compositions and a development in style from her 2010 paintings of the Olympic construction site.