1. If you weren’t an artist, what else would you be??
Inventor

2. Can you tell us more about your work and what are the main ideas you would like to express??
It’s been years now since I started working on and with my bicycle. During my studies of media-art in Berlin, I started an online project called re-CYCLING. I was fascinated by the big amount of “dead” bikes lying around the city.

In my city rides, I looked for them and then marked their positions and their description. All these information were then registered in my Google-map account so people could find those bikes, turning these places into spare parts storage on the streets.
I am always searching for new possibilities to recognize things around us that appear quite inconsiderable.

My work Velodraw transforms bicycle skid marks to drawings. I skid my bike over white wooden boards fixed on the floor. My movements during the braking moments define the lines and drifts. The bike is the brush, the tyres becomes the colour.

Keeping the re-cycling idea in my mind, I had been storing all the bald tyres that I used in Velodraw and created the Rubbing-Creature series. 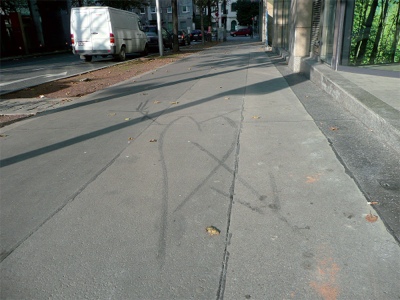 3. How do you start the process of making work??
The idea of my last work Velodraw developed after an accident I had with my bike where I nearly knocked down a pedestrian, yet leaving a fantastic skid mark on the ground.
Mostly I get my inspirations while riding my bike, cruising for adventures or climbing to wastelands in Berlin.

4. Do you consider the viewer, when making your work??
I consider which is the right medium to communicate to people, how to transform my idea to make the work accessible to everybody. For me it’s important not to steal or manipulate the imagination of the viewers.

During my last performance for the opening night of my exhibition at a car park in London, unexpectedly a bike-gang of little kids showed up and watched the show with interested eyes.
I loved it, because it tells me, that I am touching the people outside the art world as well.

6. Name 3 of your least favourite artists.?
I don’t care about them…

7. What defines something as a work of art??
The right mixture of empathy, ideas, soul and endurance.
A good piece of art should be like a rhizome, something that is reflecting all possibilities.

8. In times of austerity, do you think art has a moral obligation to respond topically??
As an artist hits by these crisis, I think it has a certain effect on the works since it touches your life. It’s important for my motivation to try seeing it in a positive way and moreover to be open to new visions.
But I don’t see a moral obligation to respond politically. Art is a response to life anyway.

9. Anytime, any place – which artist’s body would you most like to inhabit??
Klaus Kinski. He was the wild animal.

11. What was the most intelligent thing that someone said or wrote about your work?
“Is this art, can I buy it?” 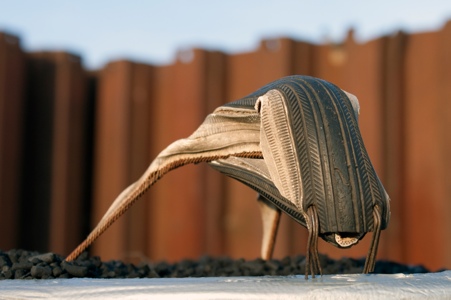 13. Which artists would you most like to rip off, sorry, I mean appropriate as a critique of originality and authorship?
I would probably be quite unhappy if I had such thoughts…

14. Do you care what your art costs? State your reasons!?
Yes, but just as long as I can earn my living with my art and, maybe finance some of my artistic megalomanias!

15. If Moma and the Tate and the Pompidou wanted to acquire one of your works each, which would you want them to have??
For the Tate, I would set up a Velodraw performance in the turbine hall creating a big drawing over 2 weeks.

16. What’s next for you?
My stay in London and the braking of the pieces for the exhibition at Tony’s Gallery gave me new inspirations and ideas. Right now I am back in Berlin working them out.
Beside I have some summer projects in mind. One will be an intervention in the Austrian mountains. Visit my homepage if you want to check out the news! 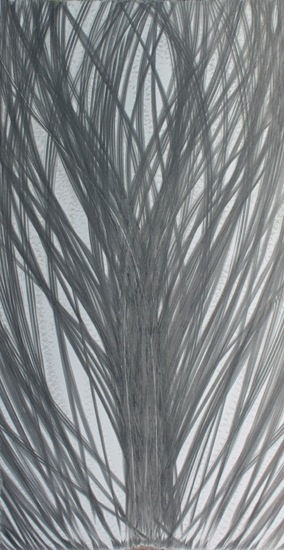 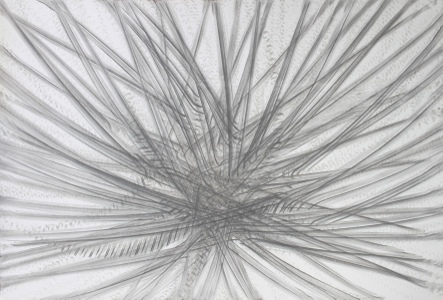